By Dion Lim
ABC7 News Bay Area
2021-02-08
Shocking video shows the moment an Oakland grandmother is knocked to the ground as she's coming home from the bank. The video captured by her granddaughter comes on the heels of a series of attacks on seniors in Oakland's Chinatown neighborhood. 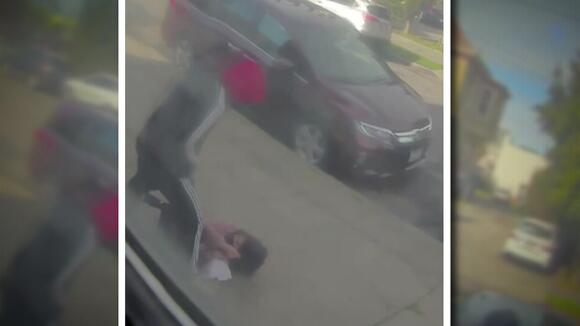 Wanting to keep her identity private, the woman's granddaughter says the incident happened February 3 at around 11 a.m. in the area of 6th Avenue and International Boulevard in Oakland. In the video one suspect can be seen quickly knocking the 70-year-old to the ground while another one runs in and steal her handbag. According to her granddaughter the suspects also tried to get her cell phone but luckily it along with cash from the bank was in her pocket and was not taken The woman's granddaughter says she's already on edge after a 91-year-old man and two other seniors were attacked in Chinatown in recent weeks. She plans to file a police report and is hoping to raise awareness of crimes against seniors. She continued to say her grandma was bruised but is recovering from her traumatic experience. RELATED: Shocking video shows 91-year-old man senselessly pushed to ground in Oakland's Chinatown

Shocking new video coming out of Oakland's Chinatown showing a man senselessly pushed to the ground has the community on high alert.

ABC7 News has reached out to Oakland Police about this incident. They held a press conference on February 3 with local leaders and the Chinatown Chamber of Commerce where Oakland Police Captain Bobby Hookfin said the attacks in Chinatown "...appear to be more violent, for whatever reason and that's why we need to stop this now."

I'm tempted to patrol Oakland Chinatown with backup catch these thugs and break their legs.

Two men are dead after San Francisco police responded to a report of an aggravated assault and fired their weapons Thursday night just a block away from UCSF Benioff Children's Hospital.
SAN FRANCISCO, CA・2 DAYS AGO
ABC7 News Bay Area

Fremont standoff over, suspect taken to hospital after barricading himself inside burning condo

A Fremont standoff in the Warm Springs neighborhood is over and the suspect is being taken to the hospital after barricading himself inside a burning condo Friday.
FREMONT, CA・2 DAYS AGO
ABC7 News Bay Area

There have been over 215 freeway shootings in California since 2018, data shows

"Racism infects everything we do unless we make a conscious effort to not do it," said Rev. Arnold Townsend at the event held outside San Francisco's City Hall.
OAKLAND, CA・4 DAYS AGO
ABC7 News Bay Area

Residents of East Palo Alto are frustrated, angry and worried after a nightmare played out at Jack Farrell Park which was filled with children and adults on Tuesday.
EAST PALO ALTO, CA・3 DAYS AGO
ABC7 News Bay Area

Jessie Rush pleaded guilty to destroying evidence after a member of the Grizzly Scouts, Steven Carrillo, allegedly killed a security officer at the Oakland Federal Building and a Santa Cruz sheriff's sergeant
OAKLAND, CA・5 DAYS AGO

Human remains were discovered on the Muni tracks by Muni personnel, as police say the victim may have been dragged by the train.
SAN FRANCISCO, CA・6 DAYS AGO
ABC7 News Bay Area

To his mother, an immigrant from Shanghai, this recognition is part of an even bigger accomplishment. "As a minority, if you don't speak for yourself, your voice will never be heard. I want him to be proud of being Asian American. I'm very proud of him."
OAKLAND, CA・1 DAY AGO
ABC7 News Bay Area

ABC7 News has learned that the injured officer has been a member of the South San Francisco Police Department for at least 15 years.
REDWOOD CITY, CA・5 DAYS AGO
ABC7 News Bay Area

With two weeks left to go the Berkeley Unified School District is making masks a must as of Monday.
BERKELEY, CA・2 DAYS AGO

In the surveillance video, the man is seen ripping down one Ukrainian flag taking down a planter with it, shortly after saying "I already talked to you about that." He then tosses the flag on to street, returning to rip down the biggest flag and smashing other objects off the porch.
SAN FRANCISCO, CA・6 DAYS AGO
ABC7 News Bay Area

"We definitely know there's someone that knows something": Parents of Alexis Gabe tell us the newly-recovered cell phone case belonging to their 24-year-old daughter was found in Antioch near her ex-boyfriend's home.
OAKLEY, CA・6 DAYS AGO
ABC7 News Bay Area

QUAIL FIRE: CAL FIRE tweeted out Sunday that the 135-acre blaze is now 75% contained and all evacuations have been lifted.
SOLANO COUNTY, CA・17 HOURS AGO
ABC7 News Bay Area

Police say the cellphone case was located in Antioch but did not specify where. Alexis Gabe was last seen on Jan 26.
9 DAYS AGO
ABC7 News Bay Area

"All we're doing is trying to counter bullying and mistreatment that many children experience, especially LGBTQ+ kids, and a chance for kids to have powerful affirmation messages can go a long way."
RICHMOND, CA・4 DAYS AGO
ABC7 News Bay Area

The fire is is approximately 110 acres and 0% contained and has prompted evacuation orders, according to officials. Details here:
SOLANO COUNTY, CA・1 DAY AGO
ABC7 News Bay Area

A Red Flag Warning will be in effect for Solano County for gusty winds, warm temps and low humidity - meaning any new fires could easily start and spread.
SOLANO COUNTY, CA・1 HOUR AGO