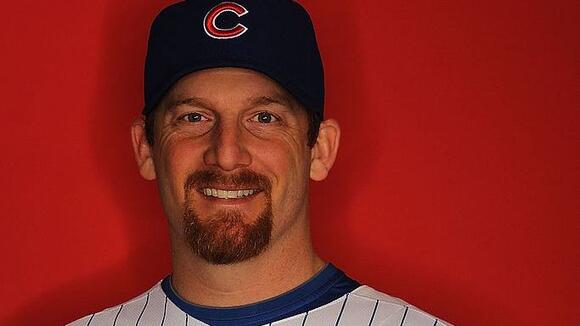 One of the activities that has gotten my roommates and I through the pandemic, to this point, is watching mindless reality TV, much to the chagrin of our brain cells. "Jersey Shore" was the first show we stumbled upon and we watched it much too quickly in its entirety, but I can't deny that it's some truly entertaining stuff. On more than one occasion, a prank war between cast members emerged, and a famous incident involved several pieces of indoor furniture being placed outside in neat arrangements.

I should have known I gave the "Jersey Shore" cast members too much credit for plotting this clever prank without it having been done previously. For that, we can thank former MLB pitcher Ryan Dempster, who got revenge on fellow big leaguers Mark Sweeney and Kevin Millar at a charity golf trip after they sabotaged his room.

Dempster was trying his luck at the casino at their St. Croix, Virgin Islands resort for the charity golf outing, so Sweeney and Millar decided to have some fun with his stuff while Dempster was away.

"[Millar] starts lathering your (Dempster's) pillowcase with lotion," Sweeney recalled on his Bleav "Major League Beginnings" podcast. "...I start putting lotion on the telephone and called and said, 'hey, can you get a wake-up call for an hour earlier?'

"Then, Kevin goes, 'Hey, I got another thing. He's got these power bars he loves to eat in the morning, that's the first thing he's gonna eat.' So, in goes shaving cream into the box of power bars, and we keep on going all over this and we don't think anything of it."

Dempster then gave Sweeney a friendly reminder that they also put lotion inside his roll of toilet paper, and then re-rolled it — "I couldn't wipe afterward, so yea, I remember that" — as part of their dastardly plan. But Dempster wouldn't just forget about this prank and let it go without a punishment in return. He had to play it cool, though.

"The minute that happened, when you guys got me, my head went to, okay, how do I get them? But it's gotta be the long game... they're gonna be head on a swivel for a few days so I can't do that right now," Dempster explained.

He had to get creative. No cars were there, so he couldn't do anything in that department. He wasn't about to violate the unwritten rule that you never mess with another person's golf clubs. And then it came to him.

"I started thinking about things, and I'm like, man, this is a beautiful, beautiful room," Dempster said. "It would look way more beautiful outside the room."

It was on the final night of the trip that he found the perfect time to execute his idea, excusing himself from a celebratory dinner to "use the bathroom."

"All of a sudden, we order the main course and Kevin Millar says, "has anyone seen Ryan?' And I said no. He was just sitting there a couple of minutes ago," Sweeney recalled. "And Kevin Millar jumps out of the seat and... starts running, 'oh, I gotta find this out.'

"I walk into my room, and Kevin goes, 'we're in trouble'... to put it in perspective, everything in my room was outside on the patio. And I said, 'what just happened?' I mean everything you can think of — the bed, the headboard, the side table, the flowers on the side table... the couch, the chairs, the coffee table — everything was out on my patio exactly the way it was presented in the room."

It could only have been one person, and as Sweeney walked into Dempster's room adjacent to his own, his suspicions were confirmed. There on the bed lay Dempster, "sweating like he just had a bikram yoga class," with his hands folded behind his head. He looked at the approaching Sweeney and proceeded to ask the perfect question.

White Sox reliever Mike Wright was ejected after throwing three straight pitches at Shohei Ohtani in the ninth inning. Ohtani has 44 home runs on the season — one off the MLB lead, which belongs to Vladimir Guerrero, Jr. and Salvador Perez. With the Angels up 9-3 in the ninth...
MLB・2 DAYS AGO
Sports Illustrated

They say you see something new everyday at a baseball game. On Wednesday night at Camden Yards, that cliché might have rung true.
MLB・3 DAYS AGO
FanSided

The Colorado Rockies have decided the future is now when it comes to outfield prospect Ryan Vilade, who was called up to the big leagues for the first time prior to the Rockies and Washington Nationals continuing their three-game series in the nation’s capital on Saturday. To make room on...
MLB・9 HOURS AGO
csusignal.com

Stanislaus State alumnus Joe Ryan made his Major League Baseball debut for the Minnesota Twins on Wednesday in a start against the Chicago Cubs. Ryan, who pitched for the Warriors in 2018, became only the third Stan State baseball player in history to play at the major league level, joining Rusty Kuntz and Steve Andrade.
MLB・14 DAYS AGO

33,957 people came to watch 25-year-old Ryan Feltner on Sunday afternoon, a crowd 5 1⁄2 times larger than the max seating capacity of Double-A Hartford’s Dunkin’ Donuts Park. Feltner’s MLB debut was no shining moment on paper, a 2 2⁄3 inning, six-earned-run showing, but the long-awaited debut is at least behind him.
MLB・12 DAYS AGO
dotesports.com

Irelia is undoubtedly one of the more powerful mid lane champions in League of Legends right now–and many players have proved it. In one highlight clip, her power was on full display as she turns a fight from certain death into a double kill without issue. Irelia was busy beating away at the enemy’s tower when two opponents got the jump on her. Yasuo and Diana made their move together, pouncing onto Irelia to defend the tower.
VIDEO GAMES・12 DAYS AGO
Yardbarker

The 25 players who will determine the MLB pennant races

With just a few weeks left to go in the regular season, baseball's pennant races will be a daily story the rest of the month. Some divisions--namely the Central in both leagues--are essentially wrapped up already, but there are still plenty of things left to be decided. Two division races in the National League appear likely to come down to the wire, and both wild card races will be full of intrigue. Let's look into 25 individual players who will play a large part in determining how these races play out.
MLB・12 DAYS AGO
Newsweek

Kyle Farnsworth drew the ire of social media users for a tweet that many thought was about cancer survivor Trey Mancini. He later denied it was about Mancini.
MLB・11 DAYS AGO

The college football season is in full swing as we enter Week 2, and Ryan’s Ramble is back to bring you more (and hopefully better) picks prior to kickoff!. There’s no sugar coating it, last week’s bets were absolutely horrible, but as I always like to say after a rough weekend: you live and you learn. I choose to laugh at myself for saying stuff like Clemson -3 against Georgia was free money rather than bask in the disappointment of going 2-9.
FOOTBALL・8 DAYS AGO
swimswam.com

Tiger Woods is gunning to eventually come back to the golf course ... so says his pal Steve Stricker, who said Wednesday the legend is rehabbing with the intent of playing again. Stricker -- the captain of the U.S. Ryder Cup team this year -- made the revelation during a...
GOLF・9 DAYS AGO

Braun had hinted that the 2020 season would be his last at the team's annual winter fan festival in January and made similar suggestions as spring training opened. The pandemic delayed that talk and Braun spent most of the shortened, 60-game schedule as the team's designated hitter.
MLB・4 DAYS AGO
Sun-Journal

Ryan Braun, the Milwaukee Brewers’ home run leader whose production was slowed by injuries during the second half of his 14-year career, announced his retirement on Tuesday. Braun hasn’t played all season and said during spring training that he was leaning toward retirement. The 2011 NL MVP made it official Tuesday in a video the Brewers posted on Twitter.
MLB・4 DAYS AGO
WSAW

WAUSAU, Wis. (WSAW) - Former Brewers’ outfielder and National League MVP Ryan Braun announced his retirement from the MLB on Tuesday. “On May 2007, I took the field for the first time in a major league uniform. Today, more than 14 years later, I have decided to officially retire as an active player,” Braun said in a video posted to social media.
MLB・4 DAYS AGO
Chicago Tribune

‘I’m trying to make something happen’: Frank Schwindel continues his torrid hitting pace for the Chicago Cubs — and opposing teams are taking notice

The “Frank the Tank” chants rang out as Chicago Cubs first baseman Frank Schwindel crossed home plate and headed toward the visitors dugout at Citizens Bank Park. Approximately 70 of his friends and family attended Wednesday’s game and those seated behind the Cubs’ dugout behind the third-base line made themselves heard in the fifth inning. Schwindel, born and raised Livingston, N.J., 100 ...
MLB・2 DAYS AGO
CBS Boston

BOSTON (CBS) — The Red Sox will have their ace back on the hill as the team starts its final homestand of the season. Chris Sale will toe the rubber against the Orioles on Friday night. Sale hasn’t pitched since Sept. 6, after he was placed on the COVID list on Sept. 10 after testing positive for the virus. He had to miss a minimum of 10 days under MLB protocols. Now he’s set to return to the rotation at a great time for the Red Sox, as the team is in a virtual tie with the Toronto Blue Jays for the...
MLB・1 DAY AGO
AOL Corp

After spending more than a decade in the MLB, six-time All-Star outfielder Ryan Braun has decided to officially hang up his cleats. “Today, more than 14 years after I first took the field as a Milwaukee Brewer, I’ve decided to retire,” Braun said in a video. “While it’s impossible to summarize my emotions, what I feel most is one, simple thing – gratitude. I just wanted to take a moment to say ‘thank you.'”
MLB・4 DAYS AGO
Sportsnaut

Bobby Dalbec homered to back an efficient Chris Sale in his return from COVID-19, and the Boston Red Sox thumped
MLB・14 HOURS AGO
610 Sports Radio

Vince Velasquez, whose six-year tenure with the Phillies ended when he was designated for assignment and subsequently released last week, didn’t take long to resurface, joining the Padres Wednesday on a minor-league deal. Velasquez will reportedly make his Padres debut Friday night in St. Louis. Acquired from the Astros in...
MLB・2 DAYS AGO