Patricia passed away at home, the Steelers said in a statement. 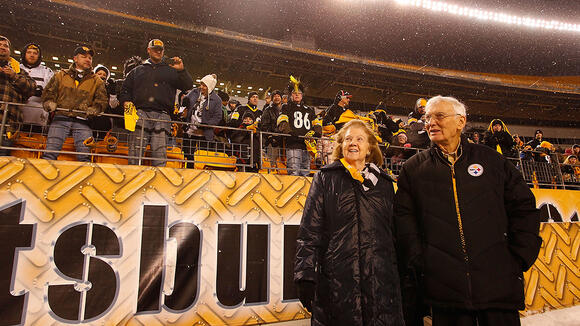 “My family and I are mourning the passing of my mother, Patricia,” said Steelers president Art Rooney II in a statement released by the team. “She helped raise nine children while supporting my father’s career with the Steelers and his time as Ambassador to Ireland. It is a sad day for our family.

“My mother meant so much to not only all of us in the family, but she gave so much of her time and energy helping those in need in the Pittsburgh community. She will leave a lasting impression on so many people and organizations in our area, especially the Salvation Army and many organizations in the North Side of Pittsburgh, where my parents called home.

“We will celebrate her life and the memories we have of her during this challenging time for our family. We appreciate everyone with your thoughts and prayers.”

Patricia was born on the North Side and graduated from the University of Pittsburgh. Patricia was married to Dan for 67 years and raised a family of nine children.

After Dan died in April 2017, the team honored her after the first game for all she did.

“They gave me the game ball, and it was wonderful,” Patricia told KDKA’s Andy Sheehan in an interview in 2019 .

Patricia and Dan infused their family and their football team with a purpose beyond winning. The couple became champions for the community, boosting the efforts of charities. Those included, notably, the American Ireland Funds, supporting the Rooneys’ beloved homeland. Patricia also spearheaded a project to restore the fountain at Allegheny Commons.

Due to the ongoing coronavirus pandemic, the funeral will be private. The Rooneys suggested contributions can be made to the Salvation Army or Pittsburgh Parks Conservancy.

The Steelers’ Zach Banner and T.J. Watt shared their condolences on Twitter.

“There is much to celebrate Patricia Rooney for, in her service to our nation and our beloved city. In her native North Side, though, she will always be remembered as one of the neighborhood’s greatest champions,” the mayor said in a statement.

In a statement, NFL commissioner Roger Goodell and his wife Jane Goodell said “We extend our deepest condolences to Art Rooney and the entire Rooney family with the passing of his mother and our friend Patricia.”

After a strange 2020-21 campaign due to the COVID-19 pandemic, the NFL is looking to return to normalcy in 2021-22 — at least somewhat, anyway. With teams trying to find ways to compete this time around, while spending money appropriately and responsibly throughout the offseason, there are still more than a few unrestricted free agents currently out on the open market.

Not surprisingly, the Pittsburgh Steelers didn’t re-sign running back James Conner during the offseason after the former third round draft pick out of Pittsburgh went through another overly disappointing season in 2020. Conner ultimately wound up signing a one-year contract with the Arizona Cardinals for $1.75 million in April and he’s now expected to get quite a few touches with them in 2021. While the Steelers seemingly had no interest in re-signing Conner, head coach Mike Tomlin reportedly was sad to lose the running back this offseason.

Paxton Lynch is back in football. It might not be with an NFL team, but the former first-round pick, who spent the 2019 season with the Pittsburgh Steelers, has the opportunity to put on a uniform again, this time heading up north, suiting up for the Saskatchewan Roughriders in the CFL.

TJ Watt is going to be a married man. The Pittsburgh Steelers linebacker went to Instagram to reveal that he is engaged to Dani Rhodes. Rhodes is a professional soccer player who most recently played for the Chicago Red Stars of the National Women's Soccer League. Her former teammate is Watt's sister-in-law Kealia Ohai, who is married to JJ Watt.

American football linebacker Ryan Shazier is a walking contradiction. He officially retired a Pittsburgh Steeler in 2020, but he hadn’t played since 2017. He was known as one of the biggest hitters in the game, but he struggles to tackle his adolescent son. That Shazier is a contradiction should come...

The Arizona Cardinals brought in JJ Watt after the stud defensive end requested a trade from the Houston Texans. In the offseason, Watt is already making his presence felt and has been very vocal off the field as well. On Thursday, Watt engaged in a little back and forth on Twitter, directed at Pittsburgh Steelers linebacker Devin Bush.

Pittsburgh Steelers got a big-time steal in Quincy Roche

The Pittsburgh Steelers opened up their 2021 NFL Draft class with somewhat of a predictable selection. Many expected Pittsburgh to be a potential landing spot for Alabama’s star running back Najee Harris, and that’s exactly what happened. The Steelers draft class in 2021 wasn’t exactly loaded with value by consensus...

Pittsburgh Steelers rumors are red hot around the future of Ben Roethlisberger, and the insane comments from Mike Tannenbaum on ‘Get Up!’ didn’t help. Tannenbaum said that Big Ben will not even make it through the first-half of the 2021 NFL Season. N’Keal Harry trade rumors are popping off after he requested a trade from the New England Patriots - should the Steelers trade for him? Steelers Talk host Thomas Mott breaks down the latest Steelers news and rumors, including TJ Watt’s engagement, on today’s video! Help us get this channel growing as quickly as possible! The more subscribers we get, the more shows we can do - https://www.

An NFL player can display his dominance in many ways. First, he must rank atop major statistical categories and provide a significant impact on the outcome of games. Take a look at quarterbacks who throw for 40-plus touchdowns and carry their teams to victory, running backs with rushing titles, sacks leaders and go-to wide receivers who constantly face double coverage and win battles against elite cornerbacks.

Buffalo Bills schedule takeaways: The Bills’ schedule starts with a big AFC matchup against the Pittsburgh Steelers and culminates with

There is still one Steelers player missing from Hall of Fame

With a flurry of Steelers set to be inducted to the Hall of Fame at the end of this summer, there is still one name missing from joining Canton. The Steelers are set to have a huge celebration in August when Bill Cowher, Troy Polamalu, Alan Faneca, Bill Nunn, and Donnie Shell are all given their gold jackets and join the Hall of Fame. Each of these players is well-deserving of this honor, and the argument can easily be made that both Nunn and Shell had to wait far too long to receive this honor. While the hype and focus should be on this group, there seems to be one Steelers name still missing from this group.

Today’s an important day for Pittsburgh Steelers nation. With players rolling up the UPMC Rooney Sports Complex for Day 1 of 2021 training camp, Wednesday marks the end of the offseason and the beginning of the preseason for the reigning AFC North regular-season champs. Just as he has for the...

Pittsburgh Steelers starting quarterback and two-time Super Bowl champion Ben Roethlisberger admitted this spring he is "motivated" by critics and doubters. He also said he approaches every season like it could be his last. As Pro Football Talk's Mike Florio noted, insider Ryan Burr reports via Twitter that the 39-year-old...

T.J. Watt beyond excited to have Melvin Ingram join the Pittsburgh Steelers

The Pittsburgh Steelers are back to work, and with training camp practices underway both players and coaches were not just on the field, but in front of microphones. With in-person interviews taking place for the first time since 2019, Ben Roethlisberger, T.J. Watt and head coach Mike Tomlin spoke to the media about the day and the team in general.

The Pittsburgh Steelers will win the Super Bowl in 2021

The Pittsburgh Steelers are preparing for the 2021 regular season, but before the real games begin, the team has to head to training camp to fine tune their skills. As we here at BTSC prepare you for the start of camp, we give you a series called “30 Scenarios in 30 Days” which gives you a Steelers scenario every day leading up to the start of camp.

As we enter what is likely the final season of an illustrious Hall of Fame career for Ben Roethlisberger, the hate and criticism of his play on the field has seemingly never been louder. Through all the discourse surrounding the veteran quarterback, one voice has emerged recently defending the 18-year...

PITTSBURGH -- On the eve of the Pittsburgh Steelers' first training camp practice, veteran inside linebacker Vince Williams informed the team of his retirement Wednesday. Williams, 31, played eight seasons with the organization after being selected in the sixth round of the 2013 NFL draft. Williams was initially released by...

Pittsburgh Steelers quarterback Ben Roethlisberger put in a lot of work this offseason to have his body in better shape for his 18th season. But Big Ben also had to mentally prepare for the 2021 season now that Matt Canada is taking over as offensive coordinator, bringing with him a playbook full of new stuff the quarterback has to learn.

PITTSBURGH -- Entering his 18th season, Steelers quarterback Ben Roethlisberger feels "fresher" than he did this time a year ago. Roethlisberger had a normal offseason for the first time since his season-ending elbow surgery in 2019, and he felt the effects of it Thursday at the Steelers' first training camp practice.