Why Emily Hampshire 'cut out' to Italy with 'Schitt's Creek' cast

Whether it's jetting off to Europe with the cast of " Schitt's Creek " to unplug or for the theme of an upcoming Super Bowl commercial, Emmy award-winning actress Emily Hampshire is a certified cut-out enthusiast.

Hampshire, who starred as the witty, deadpan desk clerk turned motel owner Stevie Budd, spoke to "Good Morning America" about her latest project as the face for another award-winning title.

"I don't do a lot of commercials 'cause I think it takes a brave brand to want a human sloth like me -- some might say -- to endorse them," she said with a laugh. "But when I found out Cutwater was doing a campaign about cutting out, I thought, 'hmmm, this is a match in canned cocktail heaven' -- it's the best feeling."

Hampshire, who stars in Cutwater Spirits' new ad campaign, said she recently had a luxurious break from the limelight thanks to Dan Levy with the entire cast of their hit comedy sitcom.

"Dan got us a villa in Tuscany for us all to go and spend two weeks together to say goodbye to each other," Hampshire shared, adding that everyone went with the exception of Eugene Levy, Catherine O'Hara and Chris Elliott. "We actually all really like each other."

The co-creator who played David Rose has publicly hinted at a possible reunion, movie or spinoff, but Hampshire said "I cannot share any details, 'cause I want to do it and I wouldn't be asked back."

"I would be down for all of that," she continued. "Usually when you're on a show you don't want to spend another day with your entire cast and we did. We loved it -- I would do anything with that group of people." 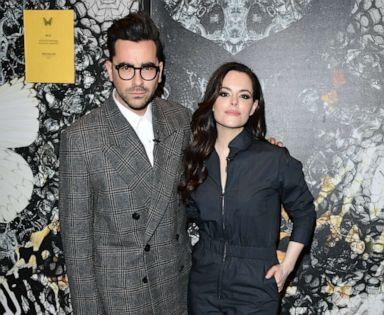 After six seasons, Hampshire said it "was extra special" for "Schitt's Creek" to end on such a high note. "Even though none of us wanted to end, I was glad we were done because I would never want the pressure of going for another season after you've swept the Emmys, it's all downhill from there."

Ever since the hit series wrapped last year, Hampshire has found other fun ways to keep busy during quarantine -- like joining TikTok.

"It's a very, very deep hole that I can go easily down. I'm there for like hours scrolling through my for you page," she said of her feed that's filled with everything from "an underdog story, also real dogs and teenagers singing."

On her own page, she's recently recorded some hilarious cooking attempts.

"So far I've made a video about how to scramble eggs. That video is the first time I ever scrambled eggs and used my stove. So I'm going through that journey as I cook," she said.

When thinking back on the show and the iconic cast of characters, Hampshire came up with accompanying cocktails orders for each person.

"Stevie Budd would be a fan of the Long Island iced tea I would say, because of it's dive bar vibes. She might also like a spicy bloody Mary or two on a Sunday -- that's Stevie vibes," she said. 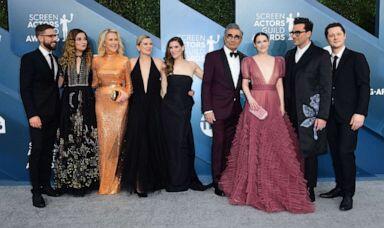 "David would most likely go for anything with tequila -- he would love the new mango marg 'cause he would just want to say 'marg' all the time," she repeated in her best David Rose impression. "Johnny is a classic man so he would love any mule -- Alexis would love the vodka soda cause it's like zero sugar, zero carbs -- she'd probably also gravitate towards cucumber because it's like fancy spa water, but with vodka." Finally, she said O'Hara's overly articulate, actress would choose the Tiki Rum Mai Tai, "'cause I would make her just to hear her say it in her Moira Rose accent."

Cutwater's campaign that rolled out on social media on Wednesday encourages people to live in the moment and "cut out" from their daily grind.

"While the TV commercial comes to life with lively outdoor 'Cut Out' occasions, Emily will highlight her own hilarious at-home interpretations of the theme," the brand said of its first 30-second Super Bowl Sunday spot and separate digital push with the actress.

"Many of us no longer have that physical divide between home life and work life, so it's hard to feel entitled to cut out, let alone know how to do it," Hampshire said. "As a long-time cut out enthusiast, I'm here to educate and inspire. Cutting out is not self-care. It's caring enough about yourself to not feel guilty about all the self-care exercise and meditating you're not doing. Cutting out is self-care without all those hashtag goals -- cutting out doesn't judge you for mixing weekends with weekdays."

In addition to the big game ad that will air in key regional West Coast markets, Cutwater has planned for additional digital takeovers, a national rollout on YouTube as well as a backyard sweepstakes.

The brand is also expanding its products with new tequila-based, ready-to-drink offerings including a new mango margarita and a series of frozen tequila pops.

In comedy, timing is everything. Television’s comedy great Norman Lear once again proved that his timing is impeccable, with a development deal for a Mary Hartman, Mary Hartman remake at TBS headlined by Schitt’s Creek‘s Emily Hampshire closing as he is celebrating his 99th birthday today. “The kick of kicks...

One of the most iconic lines from the Emmy-winning series Schitt’s Creek is, “Ew, David.” The character who coined the beloved phrase is none other than David’s loving and beloved sister, Alexis Rose. While that line is always a winner, especially on social media, there are so many more Schitt’s Creek Alexis quotes for Instagram captions you can use to accompany your next selfie to make sure the spotlight is totally shining on you.

Annie Murphy has well and truly moved on from Schitt's Creek, with the actress now attached to an upcoming feature-length comedy. Following the news that Annie was close to quitting acting before landing the iconic role of Alexis Rose, Deadline is reporting that she's teamed up with two of Schitt's Creek's writers for an exciting new project.

Unlike the Rose family on the Netflix TV series “Schitt’s Creek,” you don’t have to be a down-and-out former millionaire to get cozy in a roadside motel. Michigan’s Upper Peninsula is home to many of these mom-and-pop enterprises, offering one-of-a-kind, friendly, locally-owned lodging that’s a great option for travelers. “It...

Ew, David — stop being a disgruntled pelican! Dan Levy has yet to reveal plans for a Schitt’s Creek movie, but his sister — and costar — Sarah Levy isn’t ruling out a Rose family reunion. “I don’t even doubt. I wouldn’t put it past him for a second. I...

Schitt’s Creek’s Jazzagals: Inside Their Iconic Covers (‘Simply the Best’!) and Rehearsals

Schitt’s Creek producer Andrew Barnsley is working on a new CBC comedy, Son of a Critch, which will be brought to the U.S. with the help of Lionsgate Television. Lionsgate, who previously brought the Emmy-winning Schitt’s Creek to the U.S. via Pop TV, will handle the U.S. and international distribution rights for the 13-part series based on the memoir Son of a Critch: A Childish Newfoundland Memoir by comedian Mark Critch.

Schitt’s Creek fans have a new show to look forward to, because the team that helped make the feel-good sitcom such a hit is reuniting for a new project. Don’t expect the same light-hearted laughs, though, because the new comedy series has a bit of an edge to it. Get all the details on Annie Murphy’s new show Witness Protection, from intel on its release date to details on who’s in the cast — because it is going to show a whole new side of Alexis Rose.

Name a more iconic duo! Paul Rudd and Dan Levy were photographed having dinner together in London this weekend and, naturally, people on the internet are freaking out. Aside from being super excited by the fact these two superstars were dining together in the first place, fans of both actors took to social media to say exactly the same thing — how old is Paul Rudd?!

Marvel fans are convinced that Schitt's Creek's Dan Levy has secretly joined the cast of Ant-Man and the Wasp: Quantumania. A picture of Levy having dinner with Ant-Man star Paul Rudd in London, where the movie is currently being filmed, has got fans talking. Posted by Darjeeling Express restaurant founder...

In her newest romance novel "It Happened One Summer" (Avon Books), New York Times bestselling author Tessa Bailey plucks Hollywood socialite Piper Bellinger out of her glitzy Beverly Hills comfort zone and drops her into the sleepy coastal town of Westport, Washington — and into the burly arms of sexy sea captain Brendan.

The classic 1970s comedy-drama Mary Hartman, Mary Hartman will be rebooted on TBS, starring Emily Hampshire, who will also co-write, executive produce, and star as the eponymous heroine. All this in time for series producer Norman Lear's 99th birthday. The original show was created by Lear as a satirical take on consumer culture as the housewife heroine had to deal with nutty and violent situations that kept erupting in her life. It was the show that captured the weirdness of the 1970s as an oddball soap opera farce.

Lionsgate has teamed with Canadian broadcaster CBC to bring its comedy series Son of a Critch to the U.S. and the world. The 13-part series comes from Schitt’s Creek producer Andrew Barnsley and comedian Mark Critch is based on Critch’s memoir Son of a Critch: A Childish Newfoundland Memoir. Son of a Critch stars Critch, Benjamin Evan Ainsworth, Malcolm McDowell, Claire Rankin and newcomers Sophia Powers and Mark Rivera. According to Deadline, "Son of a Critch, which has just started production, is the story of 11-year-old Mark (Ainsworth) coming of age in St. John’s, Newfoundland in the ’80s, a boy much older inside than his 11 years – using comedy and self-deprecation to win friends and connect with the small collection of people in his limited world." Critch, who will play his own father, created Son of a Critch with The Office and MacGruber writer Tim McAuliffe.

Cameras are now rolling on Marvel Cinematic Universe sequel Ant-Man and the Wasp Quantumania, but the full cast list being kept tightly under wraps for now. In fact, outside of returning stars Paul Rudd, Evangeline Lilly, Michael Douglas and Michelle Pfeiffer, only two new additions have been made. Obviously, one...

EXCLUSIVE: Lionsgate has teamed with Canadian broadcaster CBC to bring comedy series Son of a Critch to the U.S. and the world. The 13-part series comes from Schitt’s Creek producer Andrew Barnsley and comedian Mark Critch, and Lionsgate is hoping that it can replicate the success of the Emmy-winning Canadian comedy, which it brought to the U.S. via Pop TV.

A Forgotten Chris Pratt Movie Is Blowing Up On Netflix

Ever since Guardians of the Galaxy turned him into a superstar, Chris Pratt has almost exclusively tended to operate in the realm of broad, crowd-pleasing blockbusters. There’s no doubting his talents as an actor, but it would also mark a refreshing change of pace to see him do something other than rely on his natural charm, comic timing and charisma on the big screen.