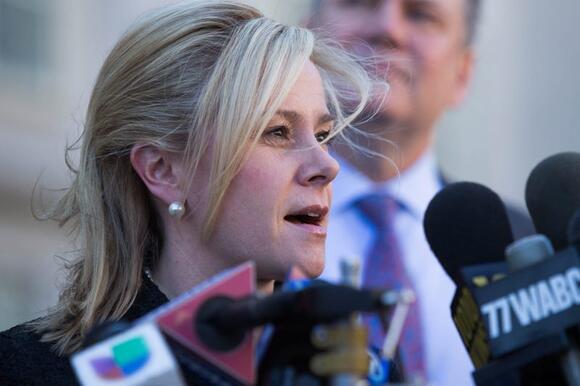 NEW JERSEY (WCBS 880) — Bridget Anne Kelly, a former top aide to ex-Gov. Chris Christie and the central figure in the 2013 "Bridgegate" scandal to shut down toll lanes at the George Washington Bridge, is now a Republican candidate running for Bergen County clerk.

Kelly spent two decades in public service, but is best known for sending the infamous email "time for some traffic problems in Fort Lee" in what prosecutors alleged was a plot to create gridlock as political payback against the town's Democratic mayor who had declined to endorse Christie.

Asked why should people trust her Kelly said, "Because they should trust the truth and get to know the person, not the article they read."

Kelly, who claimed the bridge lanes were shut for a traffic study, was found guilty at trial, along with former Port Authority executive Bill Baroni, but the U.S. Supreme Court threw out the conviction. The court found there was no doubt "deception, corruption and abuse of power, but that does not constitute a crime."

She said it's time to move on.

"It made up and it's consumed most of the past seven years, sure, of New Jersey politics, but I don't think it should be a campaign issue," Kelly said. "I was in public service for 20 years, and I had the respect and reputation to allow me to be there for 20 years."

Hogan believes the notorious email is a disqualifer.

"Absolutely it's a campaign issue. That's why it's a five-year term. You have to remain nonpartisan cause you run a significant portion of the election process. She's already proven that she can't be nonpartisan," Hogan said.

Baroni served some prison time but was released on bail when the court agreed to hear the case.

Christie has always maintained his innocence and was never charged.

New York State senators on Wednesday took their first steps towards overhauling the state’s highly criticized, and frequently troubled Board of Elections.

A family of New Jersey Transit conductors — including one of the agency’s board members — was arrested Wednesday in an alleged insurance fraud scheme, prosecutors announced Thursday.

A lawsuit filed by a group of New York City parents seeking to preemptively prevent the city’s Department of Education from teaching kids on Zoom was dismissed on Wednesday.

Interim NYC Transit president Sarah Feinberg is set to step down after more than a year on the job. Feinberg told the New York Post that she is stepping down effective Friday. PIX11 also confirmed that Friday will be her last day.

Gov. Andrew Cuomo on Monday vowed to speed things up on New York’s $2 billion rent relief program, following an onslaught of criticism over its slow rollout.

New York state set aside more than $2 billion for rent relief, but two months into the program lawmakers say the state needs to pick up the pace getting the money out.

A New York City judge on Friday ruled Mayor Bill de Blasio, and both the current and former NYPD Commissioner, will not have to testify in a judicial inquiry into Eric Garner’s 2014 chokehold death.

The bill signed by Murphy provides $135 million in small business grants. It is being split into different buckets, including $10 million for for-profit arts and cultural institutions, as well as $15 million for food and beverage establishments.

Murphy: NJ to replace all lead water pipes over the next decade

Gov. Phil Murphy on Thursday signed a package of bills aimed at tackling both lead paint and lead pipe issues throughout New Jersey. One of them will require all lead water pipes to be replaced in the next 10 years.

MTA CEO and Chairman Pat Foye on Wednesday responded to criticism that the agency is moving too slowly on getting congestion pricing started in New York City.