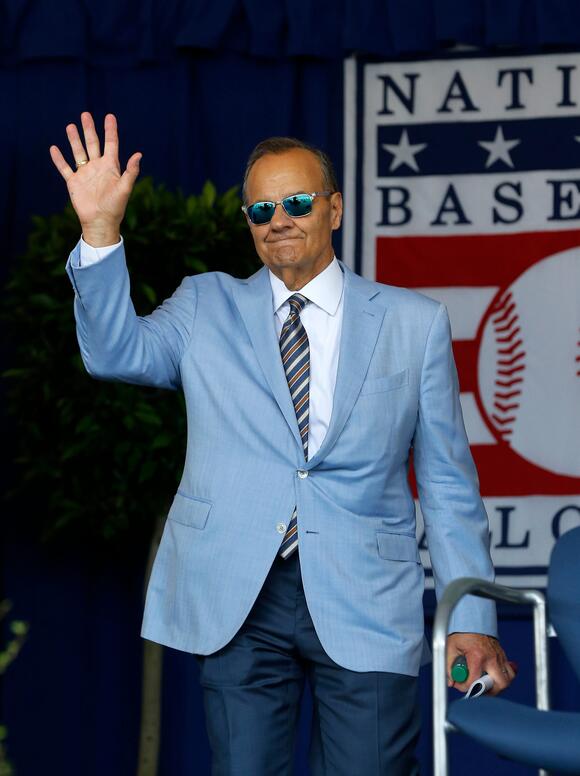 “He was a great teammate who knew how to play the game, and showed up for work every day not caring what it looked like – he did what he had to do to help win ballgames.”

The words of Hall of Famer Joe Torre, joining Carton & Roberts on WFAN to remember fellow enshrine and ex-Braves teammate Hank Aaron, who passed away Friday at age 86.

“He was great. He was a great player from early on. He used to kid around in the clubhouse with good natured barbs, but he kept pretty much to himself,” Torre continued of Aaron. “Hank was quiet – he made all his noise with his bat, and for all the home runs, he was a great pure hitter – but he was very unselfish, was an excellent defensive outfielder in right field with a great arm, and did everything to try to help you win a ball game.”

Torre told one specific story about that “unselfish” and “trying to win” tip.

“I hit behind him for eight years, and when he was at first base and I had a bad count, especially with 2 outs, Hank would try to steal,” Torre said. “If he was safe, great, but if he was out, I’d start the next inning with a fresh count. I could go to sleep on that! He was a great teammate.”

One other thing Torre got to see first-hand, though, was the struggle Aaron went through as a black player training, and eventually working, in the South when the Braves moved to Atlanta.

“I think it was 1962, my first spring with the Braves; we were in Bradenton, Fla., moving into a new hotel, but they didn’t take black players. So the Braves moved us out, and we moved to a nearby community into a small motel so all the players could stay together,” Torre said. “That’s what it was in Florida; they didn’t have all the things available to white players.”

It was a problem Torre had seen first-hand thanks to visiting his brother, Frank, when he played in Atlanta in the then-Southern League.

“I visited him and was looking for a restroom, and I saw they had colored restrooms and water fountains. That struck me,” Torre said. “I had African-American kids in my class, so it never occurred to me places were like that. Then, you look, and all the African-American fans were sitting in one section.”

Baseball clubhouses, especially the ones Torre was in, were never that way – “we were all baseball players, and that’s what was first and foremost,” he said – but

“It’s mind-boggling, and unfortunately, we’ve seen what’s happened as recently as this year, how alive that feeling is amongst a lot of people, unfortunately.”

Aaron came up in the era before free agency, and salaries weren’t as exorbitant as they are today, but Torre did confirm a story Craig found: Aaron signed with the Braves over the Giants because the salary the then-Boston team offered was $50 more a month, so roughly $300 robbed the world of seeing Hank Aaron and Willie Mays in the same outfield.

They would’ve worked well together, an iconic right fielder and center fielder, but yeah, the money wasn’t there,” Torre said. “My first year in the bigs, 1961, I think my salary was like $7,000. We’ve come a long way. For Hank, he got to Atlanta and finally made $100K, and that was really the mark – you get there, that means you’re a superstar. Now, if you have a good year – and I don’t resent this as a union guy – you make 100 times that.”

And, when asked who in today’s game reminds him most of Aaron, Torre noted someone who indeed makes a lot more than $100K – about 330 times that over the life of his current contract, to be exact.

“I had a special player with me for 12 years in Derek Jeter, but the one guy who shows me a lot of those attributes is Mookie Betts,” Torre said. “He’s not the pure hitter Hank was, but he does all the things to try to help you win ballgames.”

Could the Red Sox have drafted the next Mookie Betts?. In the second round of the MLB Draft on Monday, the Red Sox selected University of Florida centerfielder Jud Fabian. Fabian, who bats right-handed and throws left-handed hit .249/.364/.560 with 20 home runs and 10 doubles in 59 games in this past season, which earned him All-SEC first team honors as well as the All-SEC defensive team for his play in the outfield.

Dodgers: An IL Stint Could Be a Possibility for Mookie Betts After All

Wednesday night’s game will be the third game without Mookie Betts after he left Sunday’s game early due to a sore hip. Although Mookie would rather help play a vital role for this Dodger team, his body just isn’t on the same page yet. According to Dave Roberts, Betts is...

The majority of managerial criticism thrown Joe Torre’s way was before he ever stepped foot in the Yankee dugout, with many questioning the move to hire the previously unsuccessful Torre to replace Buck Showalter. Of course, Torre went on to win the Yankees’ first World Series title in 18 years...

Plenty of people across America might have spotted a recent headline about how a pair of used sneakers from 1985 sold for roughly half a million dollars in mid-May and, well, blown a gasket. Who has...

Los Angeles Dodgers outfielder Mookie Betts and Houston Astros outfielder Michael Brantley are among the players who have decided not to play in the All-Star Game, it was announced Saturday. St. Louis Cardinals catcher Yadier Molina was among the announced replacements, but he opted later Saturday to decline so he...

The financial plus of the Red Sox not signing Mookie Betts. When the Red Sox traded Mookie Betts who subsequently signed a massive deal with the Dodgers the comparisons began. The nature of the beast – trades – are comparisons and that usually narrowed down to Betts versus Alex Verdugo. Who wins? But it goes deeper than just Verdugo and prospects.

Dodgers make a go of it without Mookie Betts again vs. Giants

Not for the first time, Dodgers manager Dave Roberts acknowledged over the weekend the importance of having Mookie Betts in his lineup. Certainly, we go as he goes," Roberts said. The Dodgers had to go without Betts in their starting lineup again Tuesday night against the San Francisco Giants.

The Los Angeles Dodgers’ woes this season can be limited to one simple word: injuries. They have affected countless players, and now it’s within the realm of possibility that Mookie Betts will be the latest to fall victim to the injured list. After Betts skipped the 2021 MLB All-Star Game...

Hank Aaron Honored by MLB Players with No. 44 Jerseys at 2021 All-Star Festivities

Legendary baseball player Hank Aaron died earlier this year, but his presence will be felt at the 2021 All Star Game festivities. Players will wear his old No. 44 as a way of honoring him when they take the field this week:. Aaron, who died at the age of 86...

DENVER — Aaron Judge scored a run in the MLB All-Star Game Tuesday night, yet there’s no way that’s what he’ll remember most about this evening. Before the American League defeated the National League at Coors Field, 5-2, for an eighth straight victory, the Yankees right fielder joined the Braves’ Freddie Freeman in escorting Billye Aaron, the widow of beloved Hall of Famer Hank Aaron, to home plate for an emotional pregame ceremony. As Major League Baseball presented Ms. Aaron with a commissioned painting of her husband as well as an Aaron Braves jersey autographed by the members of both teams, Judge comforted the honoree by patting her shoulder with his right hand.

Mookie Betts, Los Angeles Dodgers, World Series, Chris Sale, Major League Baseball Most Valuable Player Award, Dave Roberts, Arizona Diamondbacks. For Mookie Betts, it hasn’t been the year he envisioned after coming in second place in NL MVP voting in 2020. Notably, the Dodgers All-Star slugger has admitted that his season thus far has been bad. Still, his numbers were enough to garner him an All-Star selection by his peers in 2021.

How Many Players On the 2021 Red Sox Are Better Than Mookie Betts?

Ok first of all, I’m not here for any Mookie Betts slander, and I hope you aren’t either. Mookie is right at the top of an extensive list of athletes who have electrified the best sports city in the world for the last two decades, but just one depressing year of baseball after trading away the most valuable player in the American League the Red Sox are fun again and look like legitimate World Series contenders.

This is what the Dodgers paid for with their 12-year, $365 million contract for Betts, a "bad" season that is still excellent, making him a worthy All-Star selection even if not up to his own standards. Selection process Betts finished fourth in fan balloting among National League outfielders, behind starters Ronald Acuña Jr., Nick Castellanos, and Jesse Winker. Betts was one of three outfielders selected to the roster as a reserve by the players, who had him fourth among NL outfielders.

One of the greatest to ever play the game will be honoured during this year’s MLB All-Star Game in Colorado. As the legendary Hank Aaron passed away earlier this year at the age of 86, players and coaches sported Aaron’s iconic No. 44 on Monday prior to the All-Star Game Tuesday.

MLB asked local artist Kaylee Bender to paint a piece honoring baseball icon Hank Aaron for All-Star Week. Bender spoke to CBSN Denver about the concept of the painting and why she was so inspired by Aaron after learning more about his life and career.

Los Angeles Dodgers outfielder Mookie Betts left Saturday's game at Colorado in the seventh inning with an apparent injury. Betts hit a ball to the gap in right-center field that fell for a double, but he jogged gingerly into second base. A trainer came out and Betts immediately left the game and Gavin Lux came in as a pinch runner.

Hank Aaron passed away in January of 2020 at the age of 86. Billye was the first African-American woman in the Southeast to co-host a daily talk show.

Mookie Betts cited the chance to heal some “nagging things” when he decided against participating in this week’s All-Star Game. Back, forearm and shoulder issues have restricted the star right fielder at times this year, but it wasn’t clear what issue still lingered. On Saturday, a different physical affliction was brought to light.