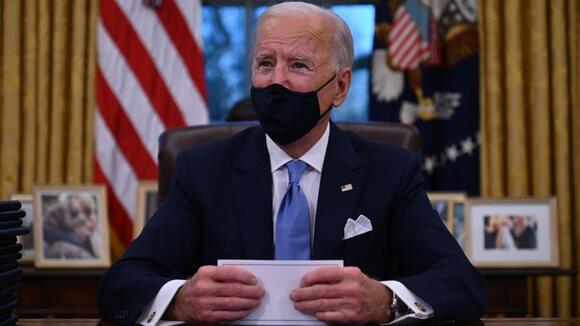 President Biden has fired the National Labor Relations Board (NLRB) general counsel after he refused to resign.

Biden asked Peter Robb, a Trump appointee, for his resignation on Wednesday. He refused to resign and was fired later that day, a White House spokesperson confirmed to The Hill.

Robb was sworn into the role in November 2017 for a four-year term slated to end this November. The NLRB is an independent agency governed by a five-person board and a general counsel.

In a letter to the White House obtained by Bloomberg Law, Robb said he wouldn’t resign and that his removal would “permanently undermine” the agency’s work.

“I respectfully decline to resign from my Senate-confirmed four-year term appointment as General Counsel of the NLRB less than 10 months before the expiration of my term,” Robb wrote.

The NLRB’s website indicates that Robb’s “period of service,” which began on Nov. 11, 2017, ended Wednesday.

Biden’s pick for the next NLRB general counsel will have to be confirmed by the Senate, and the Democratic pick would work alongside the current board that is made up of one Democrat and three Republicans, with one vacancy.

An NLRB general counsel hasn’t been asked to resign since 1950, when President Truman asked for the resignation of Robert Denham because of an anti-union bill, Bloomberg Law reported.

Rep. Virginia Foxx (N.C.), the top Republican on the House Education and Labor Committee, criticized Biden on Wednesday for calling for Robb’s resignation, saying his calls for unity and civil discourse are “already proving to be empty aspirations.”

“The Biden administration appears to be rewarding their friends in Big Labor on day one through this inappropriate demand that NLRB General Counsel Robb resign immediately or be forcibly removed,” Foxx said in a statement.

Meanwhile, Biden has selected Lauren McFerran to chair the NLRB. McFerran had been serving on the board since December 2014 and was confirmed in July for another term ending in December 2024.

Get rid of all Trumps worthless leftovers! I wish we could ship all of his worshipers with him to and Island somewhere. That would truly make America great! They have destroyed this country this thier racism and greed! It's a new day!! So thankful we finally have leadership in house, Senate and White House!!

Bipartisanship does not mean, not putting people in place that you are comfortable with. Trump removed 90% of Obama appointees in his first 30 days. Every adminastration changes personel.

Biden to blame Trump for January 6 "chaos and carnage"

President Biden will address the nation on the anniversary of the January 6 attack on the U.S. Capitol. Nancy Cordes has a preview of what he's expected to say.
PRESIDENTIAL ELECTION・12 DAYS AGO
Fox News

The Biden administration formally terminated three key Trump-era migration agreements amid an ongoing crisis at the southern border when numbers of migrants crossing the border were at their highest. The Trump-era agreements were signed with the Northern Triangle countries of Guatemala, El Salvador and Honduras in 2019 as part of...
POTUS・3 DAYS AGO
MSNBC

The tragic irony of Trump's pitiful response to Biden

President Joe Biden generally says very little about his predecessor — he's referred to Donald Trump simply as "the other guy" — but the Democrat made a rather dramatic exception on the anniversary of the Jan. 6 attack. The incumbent president presented a detailed condemnation of the Republican's anti-election lies, explaining to the public the corrosive effect Trump's war on reality has had on our democracy.
PRESIDENTIAL ELECTION・10 DAYS AGO

(Reuters) - The National Labor Relations Board on Friday said it is considering tossing out Trump-era decisions involving CVS, ExxonMobil and Marathon Petroleum because a Republican board member failed to disclose certain investments. The Democrat-led board in notices issued in three separate cases said William Emanuel, whose term expired in...
POTUS・10 DAYS AGO
Newsweek

The MyPillow founder made the remarks at Trump's Arizona rally, where many speakers touted conspiracy theories about the 2020 election.
PRESIDENTIAL ELECTION・1 DAY AGO
BBC

Biden accuses Trump of creating a web of lies

The US President Joe Biden has said that Donald Trump has a bruised ego and cannot accept that he lost the election. He was speaking a year after rioters stormed the US Capitol building.
PRESIDENTIAL ELECTION・11 DAYS AGO
MSNBC

In August 2018, CNN discovered that a White House speechwriter, Darren Beattie, spoke at a conference alongside well-known white nationalists. He was asked to resign, but he refused, prompting the Republican White House to fire Beattie soon after. But as regular readers may recall, Team Trump wasn't quite done with...
PRESIDENTIAL ELECTION・16 HOURS AGO

Sen. Ted Cruz appeared Tuesday on Hannity, following a hearing earlier in the day in which the Texas Republican questioned Jill Sanborn, the executive assistant director for the FBI’s National Security Branch. Cruz pressed Sanborn on whether the agency played any part in the violent insurrection at the Capitol on Jan. 6, a narrative Fox News opinion host Tucker Carlson has been pushing for months.
TEXAS STATE・5 DAYS AGO
Washington Times

The Biden administration delivered another hit to domestic oil-and-gas production amid soaring energy prices by reversing the Trump-era move to open up millions of acres to drilling in Alaska, drawing rebukes Tuesday from outraged Republicans. The Bureau of Land Management announced Monday that it would shelve the Trump administration’s 2020...
ALASKA STATE・6 DAYS AGO
MyArkLaMiss

Democrats have been waiting for a year for President Joe Biden to call out former President Donald Trump for his claims about the 2020 presidential election and pinpoint the role Trump played in instigating his followers to “fight like hell” to contest the result.
PRESIDENTIAL ELECTION・10 DAYS AGO
Axios

President Biden was unsparing in his criticism of former President Trump for fanning the flames of the Jan. 6 attack on the U.S. Capitol in a speech marking the first anniversary of the attack. Driving the news: "The former president of the United States of America has created and spread...
PRESIDENTIAL ELECTION・11 DAYS AGO

WASHINGTON (AP) — It may not be the fight he sought, but taking on Donald Trump is President Joe Biden’s calling. Biden offered himself as a guardian of American democracy in a visceral speech Thursday discussing the horrors of the Jan. 6 insurrection that sought to overthrow his 2020 election victory. Trump’s refusal to accept the reality of his defeat spawned a conspiracy that came close to shattering the nation’s system of government and continues to ripple through society a year later.
PRESIDENTIAL ELECTION・11 DAYS AGO
Washington Post

WASHINGTON — President Joe Biden accused Donald Trump and his supporters of holding a “dagger at the throat of democracy” in a forceful speech Thursday marking the anniversary of the deadly attack on the U.S. Capitol. He warned that though it didn’t succeed, the insurrection remains a serious threat to America’s system of government.
PRESIDENTIAL ELECTION・12 DAYS AGO
Newsweek

One QAnon follower said: "When he came out…I instantly felt it was not him. I kept trying to convince myself that it was."
ARIZONA STATE・22 HOURS AGO
Business Insider

"Things are not going well," Romney said Sunday of President Joe Biden's tenure. "And the president needs to stop and reset."
PRESIDENTIAL ELECTION・1 DAY AGO
Newsweek

Fox News host and former Trump supporter Laura Ingraham isn't ready to back him in another bid for the White House, she told a Virginia magazine.
PRESIDENTIAL ELECTION・9 HOURS AGO
Fox News

Congressman Kevin Brady (R-TX), Ranking Member House Ways & Means Committee, tells Brian Kilmeade that it is clear President Biden bungled the economy in a big way during his first year in office. Brady says we should have had a banner year with the economy in 2021 based on what President Biden inherited from President Trump and instead we saw President Biden repeal three years of wage growth and take his eye off covid and dismissed and denied inflation and worker shortages while pursuing an extremist socialist spending plan. On the democrat sponsored voting rights bill, Brady doesn’t believe it has a chance unless progressives would be willing to walk away from everything they care about to resurrect the bill and Brady doesn’t see that happening. Brady also defended Texas voting law and how it has expanded early voting and added hours including on Sunday. Brady says there is not statewide voter suppression and the democrats are pushing a big lie in order to have a federal takeover of elections.
TEXAS STATE・18 HOURS AGO
Salon