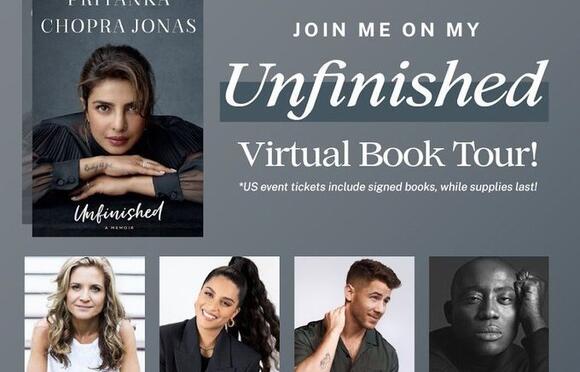 Actor, singer and now author, Priyanka Chopra Jonas announced the first four dates of the virtual book tour of her memoir ahead of its release.

Bajirao Masatani actress shared that the four-day-long tour will begin on February 9 on Instagram. She also announced the four special guests for each day of the virtual tour.

Nick Jonas just celebrated his wife, Priyanka Chopra, by sharing a rare childhood photo alongside a current pic of the actress. Over the weekend, the 28-year-old singer honored Chopra’s 39th birthday by posting a slideshow on Instagram. The first photo is a recent snap of Chopra, who is sitting in...

Three years ago, just two months into their relationship, Nick Jonas proposed to Priyanka Chopra on her 36th birthday. And now, to mark their anniversary, they both posted photos from the occasion, and they're absolutely beautiful. “My everything.. 3 years today. Seems like a blink and a lifetime at the...

Nick Jonas and Priyanka Chopra only have eyes for each other. Like many modern romances, their relationship began online, first as a flirtatious friendship and then something more. In September 2016, Nick reached out to his Careful What You Wish For costar Graham Rogers on Twitter about the former beauty pageant queen (Graham had worked on Quantico with her). Nick wrote,"Priyanka. Is. Wow." He then got the courage to send the actress a direct message on Twitter. “I’m hearing from a few mutual friends that we should meet,” the singer's DM read. “My team can read this. Why don’t you just text me,” Priyanka responded. She shared her number with him and the two began texting each other.

Singer Nick Jonas has taken off his beard, leaving netizens in awe of his clean-shaven look. On Thursday night, Nick took to Instagram and posted a video of him shaving his face. “Shaved my face for the first time in a long time,” he captioned one of the images, wherein he flaunted his shaven face. Priyanka Chopra Is Missing Her ‘Firework’ Nick Jonas on the 4th of July, Shares an Adorable Picture With Her Hubby (View Pic).

Nick Jonas thinks his wife Priyanka Chopra Jonas deserves “all the happiness in the world”. The 28-year-old star has taken to Instagram to post a heartfelt birthday message to his wife, who celebrated her 39th birthday on Sunday (07.18.21). Alongside some photos of the Hollywood star, Nick wrote: “Happy birthday...

Priyanka Chopra: 'Nick Jonas is the greatest love of my life'

Nick Jonas is the “greatest love” of Priyanka Chopra’s life. Nick, 28, and Priyanka, 38, tied the knot in India three years ago and Priyanka is still head-over-heels for her husband. When asked by Stylist magazine, “What is your greatest love?”, Priyanka replied: “I don’t want to be clichéd and...

Priyanka Chopra Jonas reveals when she felt most beautiful

Priyanka Chopra Jonas felt most beautiful on her wedding day. The 38-year-old star married Nick Jonas in 2018, and she admitted her confidence and joy shines through in the photos. She told OK! magazine: “I think the universe was in the right place and I felt my most confident and...

Earlier this year, newly-minted author Priyanka Chopra released a memoir, "Unfinished," in which she discusses her late father, Dr. Ashok Chopra, who died from cancer in 2018. She later memorialized him with a tattoo, which is featured prominently on the book's cover. Did you know the actor also has several other tattoos as well?

Nick Jonas Shaves His Face for the 'First Time in a Long Time' — and Priyanka Chopra Reacts!

Nick Jonas is saying goodbye to his scruff. On Thursday, the "Spaceman" singer, 28, debuted a new look after shaving off his facial hair. "Haven't shaved in a while," he wrote alongside a TikTok video, adding in the caption: "Fresh face." In the clip, set to Marshmallow and the Jonas...

Nick Jonas has nothing but love for wife Priyanka Chopra Jonas!. In honor of her 39th birthday on Sunday, the singer penned a heartfelt message for the actress, which he shared alongside two photos that were taken years apart. In the first photo, his wife wore a gorgeous pink sari...

One of Hollywood’s favorite power couples is celebrating a special anniversary. On Monday, July 19th Nick Jonas and Priyanka Chopra Jones each shared an adorable picture timestamped 7/19/18- the day he asked Priyanka to make him the “happiest man in the world.” Nick shared the first adorable selfie of them eating in front of the ocean after she said yes. They both smiled in the camera as she rested her face on her freshly decorated left hand, “3 years ago today. 💍❤️” he captioned the pic. Priyanka commented, “Thank you for asking jaan.. 😍”

Priyanka Chopra Shares Pics of Her ‘Quiet Birthday’ Celebration, Thanks Hubby Nick Jonas and Her Fans For Making the Day Special

A day after celebrating her birthday, global star Priyanka Chopra treated fans with glimpses of her quiet birthday celebrations, thanking them and her husband Nick Jonas for making her day special. Taking to her Instagram handle, Priyanka shared a series of pictures of herself celebrating her special day in London. “Photo Dump. Thank you to everyone who sent me so much love and affection this birthday. So many wonderful texts calls stories tweets,” the ‘Fashion’ star captioned the post. Priyanka Chopra and Nick Jonas Celebrate 3 Years of Engagement by Sharing Unseen Pictures on Instagram!.

Priyanka Chopra Jonas didn't join the public applause when the royal couple took their seats. She adjusted her scarf instead.

‘My relationship with beauty has been magnified by my heritage’: Priyanka Chopra Jonas on how she uses makeup to feel more confident

As one of the only actors to make the transition from Bollywood to Hollywood, Priyanka Chopra Jonas has gone on to become one of the most accomplished South Asian women in the industry. To mark her new global partnership with Max Factor, which starts with her campaign for the brand's new Facefinity All Day Flawless Airbrush Finish 3-in-1 Foundation, Priyanka opens up to GLAMOUR’s Emily Maddick about her relationship with confidence, her mental health and the surprising life advice she lives by.

Watch: Joe Jonas Has the Best Response to Sophie Turner's Sexy Selfies. Joe Jonas is apparently a sucker for this one hobby that got him into trouble with wife Sophie Turner. Like many folks during the coronavirus pandemic, the Jonas Brothers singer took up a new activity while staying safe at home with Sophie. Joe revealed to the Wall Street Journal that he "got very into" building Legos with the Game of Thrones star, but it wasn't totally smooth sailing for the duo.

Eva Mendes and Ryan Gosling are among Hollywood's most private stars and prefer to keep their personal lives out of the spotlight. But the beautiful actress delighted her fans this week when she made reference to pregnancy in a candid Instagram caption. Eva, 47, shared a photo showing her dressed...

Simone Biles and her boyfriend, NFL player Jonathan Owens, have a very modern romance. The Olympic gymnast revealed in a new interview with Wall Street Journal Magazine how she and him got together at the start of the pandemic in March 2020 — and the tale involves Instagram and a nudge by her younger sister, Adria.