Orange County insurance brokers help pay off more than $2.1M in medical debt for those in need

ABC7
2021-01-19
For many people, medical debt in itself can be debilitating. But in the next couple of months, that's going to change for certain people in need. "In Orange County, it's over 1,000 people that are, instead of getting a door knock from a debt collector, are gonna get a note from us saying your debt's forgiven," said Matt Hanson, a managing partner at insurance broker Alera Group. 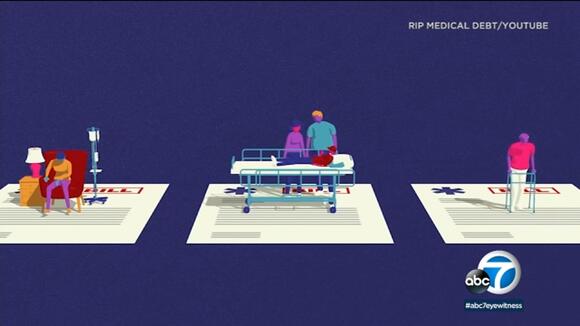 More than 80 employees across the company have donated their own money to help erase more than $2.1 million worth of medical debt. It's for people who live at or below 200% of the poverty line in Orange County. " We're in the insurance business, we see this struggle of employers trying to provide benefits for their employees," he said. Through a partnership with the non-profit RIP Medical Debt, every $100 donated forgives $10,000 in medical debt. Hanson got the idea after learning an Eagle Rock church had paid off $5.3 million in medical debt back in 2019 .

A holiday surprise is coming in the mail for thousands of people throughout the Los Angeles area who are unable to pay their medical bills.

"The debt is paid, it's taken off of their credit report, there is no responsibility for it, and I just thought that was a phenomenal idea and a good way to do something," he said. The idea immediately resonated with Alera employee Anastasia Chernykh, whose trip to the ER a number of years back turned into a four night stay at the hospital. At the time, she was a recent immigrant from Russia with no healthcare. "The bill was astronomical, let's just put it that way," she said. "Walking away with debt collectors, walking away receiving bills for months and months and months." She knows firsthand how much of a difference this can make for people most in need. "Just having some of that stress alleviated, having some of their future being set up, having some immediate financial pressure taken off, I think it can have a great impact," she said. "It's the one debt that you don't elect to take on. You may have elected to take on college debt, you may have elected to take on a car loan, or what have you. Nobody wakes up and goes 'You know what I just feel like spending a little extra money on my healthcare today'," said Hanson. According to RIP Medical Debt, 66% of all U.S. bankruptcies are tied to medical debt issues and 25% of all U.S. credit card debt is medical debt.

LITTLE ROCK (TB&P) — A group of community organizations is paying off more than $35 million in medical debt for 23,896 Arkansans in all 75 counties. It’s also making recommendations to prevent medical debt from accumulating in the first place. The debt was purchased on the secondary market...
ARKANSAS STATE・20 HOURS AGO
CBS New York

NEW YORK (CBSNewYork) — There are new resources available to help New Yorkers dealing with the long-term impacts of COVID. It’s for people who believe they got the virus at work. The state’s workers’ compensation board is offering free webinars about workers’ rights and assistance filing compensation claims. You have two years from the date of becoming injured or ill to filed a workers’ compensation claim, so the deadline is approaching for people who got sick at the start of the pandemic. For more information, visit www.wcb.ny.gov/covid-19.
NEW YORK CITY, NY・1 DAY AGO
GOBankingRates

CareCredit cards are a special type of credit vehicle used for out-of-pocket medical expenses that are not covered by medical insurance. This is not a regular credit card, and cannot be used for...
CREDITS & LOANS・1 DAY AGO
ABC7

While the winter surge of COVID-19 infections fueled by the omicron variant appears to be easing, authorities are watching the emergence of an omicron "sub-lineage'' that has spread rapidly in some countries.
LOS ANGELES COUNTY, CA・10 HOURS AGO

Study: Most Americans Do Not Have $1,000 Cash On Hand For Emergencies

PITTSBURGH (KDKA) – Most Americans do not have the cash on hand to cover an emergency expense of $1,000, a new study reports. Americans are just not saving as much as they need. Suppose your car needs emergency repairs, or a family member is rushed to the emergency room for care not covered by insurance, or your furnace blows during this frigid winter weather. Could you easily put your hands on at least a thousand bucks? “Only 44 percent of Americans could cover that out of savings,” Greg McBride, chief financial analyst at bankrate.com, told KDKA money editor Jon Delano on Tuesday. Bankrate.com conducted...
AMERICAS・2 DAYS AGO
moneytalksnews.com

One silver lining of the COVID-19 pandemic is that millions of people paid down their debts in record numbers. Alas, those good habits didn’t last long. As life returned to something closer to normal in 2021, debt began to rise again. Still, many Americans appear ready to chip away at their balances in 2022.
PERSONAL FINANCE・2 DAYS AGO
BIN: Black Information Network

A study found that when no-strings-attached cash is given to families with low incomes, babies' brain activity improved.
ADVOCACY・2 DAYS AGO
ABC7

A plan to bring single-payer health care to Californians is moving forward, but what's the timeline? Here's what's in store.
CALIFORNIA STATE・2 DAYS AGO

Utah nonprofit helps those in need with refurbished medical devices

Project Embrace CEO and founder, Mohan Sudabattula said the idea for the organization started after his experience working in a hospital where he was given medical devices that were used only a couple of times. “Part of my job was to take that stuff and throw it away,” Sudabattula said....
UTAH STATE・5 DAYS AGO
koamnewsnow.com

How to Pay off Debt in Retirement

Should you be concerned about your debts in your retirement? The short answer is yes. If possible, it’s best to avoid carrying debt in retirement. Studies have linked credit card debt with increased stress and even physical pain. Meanwhile, older adults without such burdens find it far easier to manage their finances and make ends meet.
CREDITS & LOANS・8 DAYS AGO
fox26houston.com

Medical care for those without insurance in Sevier County

SEVIERVILLE, Tenn. (WVLT) - The cost of a doctors visit without insurance can be extremely expensive. In Sevier County people are waiting months for care, but Thursday one group changed that. A health fair at Mountain Hope Good Shepherd Clinic brought in medical experts and students studying medicine from ETSU...
SEVIER COUNTY, TN・14 DAYS AGO

Children's Hospital Los Angeles received an $8.3 million grant from the National Institutes of Health to study the long-term effects of COVID-19 infection in children and young adults, in hopes of identifying the best ways of treating the virus in younger patients, the hospital announced today.
LOS ANGELES, CA・1 DAY AGO
The Motley Fool

Stimulus Update: Extra Stimulus Money Is Coming for Residents in These 4 States in 2022

Hoping for more stimulus money in 2022? If you're a resident of one of these four states, you may be in luck.
BUSINESS・1 DAY AGO
WKRN News 2

When will children under 5 be eligible for the COVID vaccine?

Now in the third year of the COVID-19 pandemic, one U.S. demographic is still unprotected against the virus – children under the age of 5.
KIDS・30 MINUTES AGO
ABC7

Don’t Qualify for the Child Tax Credit? See If Credit for Other Dependents Applies to You

With the tax filing season officially underway, Americans may be looking to claim as many credits and deductions as they legally can to reduce their tax bills. If you have older adults living with...
INCOME TAX・2 DAYS AGO
CBS LA

SANTA ANA (CBSLA) – Orange County Wednesday sprinted past a grim milestone of 6,000 COVID-19 deaths, while hospitalizations and other data indicated this winter’s Omicron variant-fueled surge is slowing. The county logged 28 more fatalities Wednesday, with all but one occurring this month. The other fatality occurred on Christmas Day. “We should expect that the death curve is going to fill in,” Andrew Noymer, an epidemiologist and UC Irvine professor of population health and disease prevention, told City News Service  Wednesday. “The January (death toll) is going to look an awful lot like the August (death toll) before it’s all said and done,” Noymer...
ORANGE COUNTY, CA・1 DAY AGO
WINKNEWS.com

If you live in Cape Coral, you will be paying more for electricity this year. That extra money will be used to help pay for charter schools in the area. The City of Cape Coral believes charter schools add value and are worth the investment, but that investment costs more money than the city can currently afford.
CAPE CORAL, FL・1 DAY AGO