By Vincent Frank
Sportsnaut
23 days ago 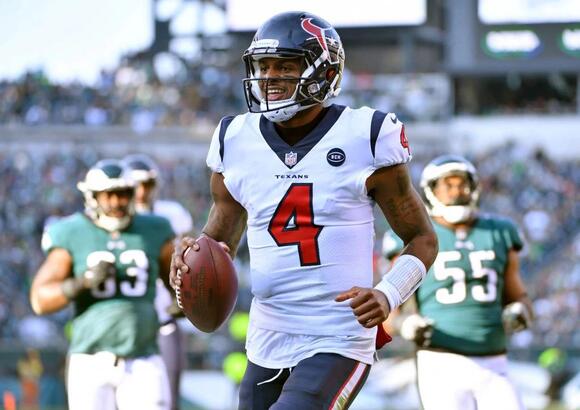 There’s no telling whether Houston Texans quarterback Deshaun Watson will be dealt ahead of the November NFL trade deadline.

What we do know is that the Pro Bowl quarterback requested a trade early this past offseason, only to ultimately face allegations of sexual assault and/or misconduct from north of 20 women .

A recent report from Fox Sports NFL insider Jay Glazer notes that the Texans are softening their stance on compensation in a potential Watson trade after he was inactive for the first three weeks of the season. It’s in this that a deal could get done within the next month or so. If so, here’s a look at five ideal Deshaun Watson trade scenarios.

Steelers general manager Kevin Colbert has struggled even attempting to find an eventual heir-apparent to future Hall of Famer Ben Roethlisberger . Now that the 39-year-old quarterback has hit that proverbial wall and is likely in the midst of his final NFL season, pressure is the name of the game in the Steel City. A franchise-altering move might need to be in the cards for the Steelers to remain at least somewhat relevant in the AFC.

That’s where this huge bounty comes into play. Pittsburgh exhausts its first-round picks each of the next three years as well as stud safety Minkah Fitzpatrick in a trade for Watson. In turn, Houston could either build its defense around Fitzpatrick or flip him for more draft assets. It almost makes too much sense for both teams.

Jameis Winston has been on and off through his first three starts as a member of the Saints. He threw five touchdowns in the season opener before struggling Week 2 in a loss to the Carolina Panthers. While Winston was more efficient in last week’s win over the Patriots , there’s major issues here.

Everyone knows that Sean Payton wants to find that eventual long-term replacement for Drew Brees. Obviously, Watson would be that. 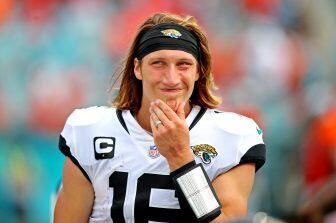 As for Houston, it adds a record-breaking wide receiver in Michael Thomas as well as a Pro Bowl-caliber defensive back with Marcus Williams. Acquiring two future first-round picks while potentially relying on rookie Davis Mills under center could make sense. If Mills does not pan out, Houston could use the 2022 NFL Draft to find another quarterback.

By now it’s well known that Philadelphia’s brass continues to kick the tires on adding Watson to the mix. It’s interesting to look at given that general manager Howie Roseman exhausted a second-round pick in the 2020 NFL Draft on Jalen Hurts . Unfortunately, some struggles on the part of Hurts over the first three games has placed into question his status as the face of the franchise in Philadelphia.

As for potential compensation heading back to Houston this hypothetical deal, it would have to include the aforementioned Hurts. No objective person believes that Davis Mills is a better long-term option than him. Add in star right tackle Lane Johnson and two first-round picks next April, and this would be a pretty big haul for Houston.

Yet another team with a young signal caller who has been linked to Watson, Miami also has assets to pull off a trade of this ilk. That includes multiple first-round selections in the 2023 NFL Draft stemming from the blockbuster spring-time trade with the San Francisco 49ers. In reality, Tua, Howard and three first-round picks would get this done.

Whether the Fins believe that Watson is worth that type of bounty remains to be seen. What we do know is that Tua Tagovailoa has struggled with both injuries and inconsistency throughout his young career. If Miami wants to return to relevance in the AFC East, it will have to upgrade from the 2020 first-round pick. That’s pretty clear right now.

At this point, it’s hard to imagine the Giants’ brass having faith that the struggling Daniel Jones is going to be the long-term answer under center. He’s thrown two touchdowns in three games this season — all losses. Over the course of his past 17 starts, Jones has thrown a mere 13 touchdowns . That’s not going to cut it in today’s NFL. With the decision on his fifth-year option looming, look for the Giants to check in on other possibilities. 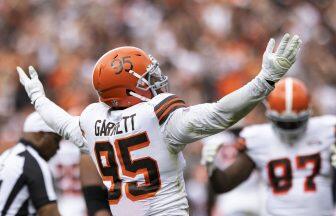 There’s also good news for New York on this front. By virtue of enabling Chicago to move up to the 11th pick in the 2021 NFL Draft for Justin Fields , the Giants have an additional first-round pick in 2022. It’s going to be extremely valuable. Add in its own first-round pick (likely top 10), and that’s a nice haul for Houston. Perhaps, the Texans also take a chance to see if a change of scenery can help Jones. Another scenario here would be picking up Saquon Barkley in lieu of the struggling signal caller.

The Buccaneers wild win over the Patriots on Sunday didn't just allow Tom Brady to get revenge on his old team, the victory also allowed Brady to enter a very exclusive club. Thanks to the victory, Brady is now just the fourth quarterback in NFL history to defeat all 32 teams, joining Peyton Manning, Drew Brees and Brett Favre.
NFL・16 DAYS AGO
ClutchPoints

Houston Texans quarterback Deshaun Watson remains with the AFC South organization as it stands today, but the troubled signal-caller could soon be on the move. With the Miami Dolphins long being linked to Watson, who is still facing some very serious sexual assault allegations and presumably more than a few legal battles ahead, the Texans have continually tried to distance themselves from the former first round NFL Draft pick. In addition to the Dolphins, there is apparently at least one other team that has at least checked in on Watson and his availability via trade.
NFL・16 DAYS AGO
ClutchPoints

Deshaun Watson may not play in the NFL at all this season. Just because he’s likely to be sidelined indefinitely as multiple probes into allegations of sexual misconduct against him continue, though, doesn’t mean he won’t be traded from the Houston Texans. FOX’s Jay Glazer reported on Sunday that Houston...
NFL・25 DAYS AGO
CBS Sports

With less than four weeks to go until the NFL trade deadline, the Houston Texans have a big decision to make about Deshaun Watson. If the Texans want to deal him away this year, they have to do it by the deadline date of Nov. 2. If Watson is still on the roster after that, the Texans won't be able to trade him until March.
NFL・13 DAYS AGO

Rumors of a Jimmy Garoppolo for Odell Beckham Jr. trade heating up

Ahead of the Week 5 showdown between the Houston Texans and New England Patriots, both 1-3, unsettled Houston quarterback Deshaun Watson still wishes to be traded, remains a paid, unused signal-caller for each game, and continues to face 22 lawsuits alleging acts of sexual assault and misconduct and 10 criminal complaints that are making it difficult for the Texans to find a buyer at the right price.
NFL・14 DAYS AGO
FOX Sports Radio

Dan Beyer and George Wrighster discuss the Dolphins' disappointing season and consider what options they have at quarterback moving forward.
NFL・11 DAYS AGO
fantasypros.com

Deshaun Watson trade to Dolphins could potentially happen this week

Mark Berman is reporting that the Dolphins and Texans are working out a potential deal that could send Deshaun Watson to Miami. While Berman said that a deal could get done as early as this week, the hopes are that it will happen before the November 2nd trade deadline. (Mark Berman on Twitter)
NFL・1 DAY AGO

The Carolina Panthers are among the teams being linked to a potential Deshaun Watson trade. However, Panthers head coach Matt Rhule is projecting the image that he’s not that invested on the potential of the team acquiring the Houston Texans quarterback, per Pat Leonard of The Daily News. I asked...
NFL・17 HOURS AGO
FanSided

With rumors swirling around a potential trade sending Deshaun Watson to the Miami Dolphins, Tua Tagovailoa could be headed to the NFC East. The Miami Dolphins are reportedly on the verge of closing a deal for star quarterback Deshaun Watson of the Houston Texans. New details are emerging rapidly in this potential deal and one of those surrounds current Dolphins quarterback Tua Tagovailoa.
NFL・1 DAY AGO
ClutchPoints

Prepare yourself for the rare NFL midseason blockbuster. According to reports, the Miami Dolphins, Houston Texans, and Washington Football Team are closing in on a three-team exchange that would send embattled QB Deshaun Watson to Miami and QB Tua Tagovailoa to Washington. Rumors of a Watson-to-Miami trade have been swirling...
NFL・1 DAY AGO
Sportsnaut

We could be on the verge of one of the biggest in-season trades in NFL history. Multiple media reports indicate
NFL・1 DAY AGO

The NFL midseason trade deadline tends to have little live action. This year, let's hope a lot more buyers and sellers are looking to make deals before the clock hits 4 p.m. ET on Nov. 2. Most of the big rumors are swirling around Texans quarterback Deshaun Watson, who already...
NFL・18 HOURS AGO
ClutchPoints

Deshaun Watson has been one of the hottest names in football after the allegations thrown at him with his sexual assault cases. There’s no decision yet on the legal actions taken against him, but he has not played at all this season for the Houston Texans. For what it’s worth,...
NFL・1 DAY AGO
Los Angeles Times

NFL roundtable: How will Rams fans react when Jared Goff is introduced at SoFi Stadium as a member of the Detroit Lions?
NFL・2 DAYS AGO
USA TODAY Sports Media Group

The Denver Broncos were frequently linked to Deshaun Watson earlier this offseason after the quarterback asked for a trade from the Houston Texans. The Broncos were believed to be interested in Watson, but that was before 22 women filed a lawsuit against the QB alleging sexual assault. Watson’s ongoing legal...
NFL・20 HOURS AGO

Despite a battered roster, Tampa Bay is finding ways to win, while the Titans nab a statement win over Buffalo. Plus, what to make of the bottom of the pack.
NFL・2 DAYS AGO
Sportsnaut

The NFL injury report is always filled with some of the game’s best stars, leaving fans and fantasy football managers
NFL・2 DAYS AGO
ClutchPoints

The rumor whispers really started to heat up on Wednesday when multiple reports indicated that the Miami Dolphins were nearing a deal to acquire Houston Texans quarterback Deshaun Watson. These rumors have been super popular dating back to the summer and yet again, nothing has been put in ink. Dolphins...
NFL・14 HOURS AGO
The Clemson Insider

NFL Hall of Famer says this team should go get Watson

On the NFL Network's Good Morning Football show, the cast discussed whether they are in or out on the statement, "The Dolphins are the most disappointing team in the NFL in 2021. The Dolphins, who (...)
NFL・18 HOURS AGO