8 powerful speeches from Martin Luther King Jr. that aren't 'I Have a Dream' 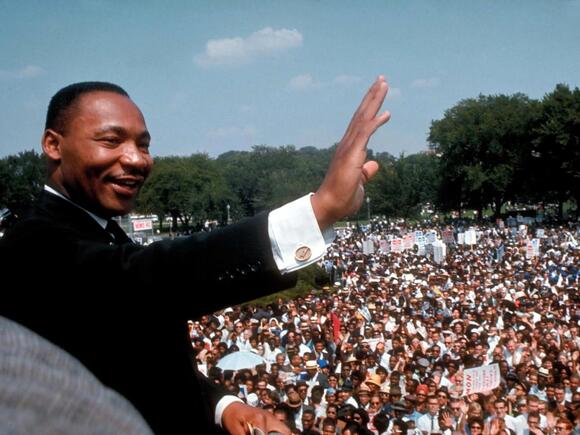 Martin Luther King Jr. delivered his historic "I Have a Dream" speech on the steps of the Lincoln Memorial in 1963, but he gave numerous other powerful speeches.

Throughout his fight for equality, King delivered a number of speeches that drew large audiences but got lost in the shadow of "I Have a Dream." As a master orator, the reverend was able to inspire an entire nation, so many of his speeches are worth a revisit.

In honor of Martin Luther King Day on January 17, here are some of King's inspirational words that you may have missed in history class.

When Rosa Parks was arrested for refusing to give up her seat on a city bus , she sparked the Montgomery Bus Boycott and gave King one of his first opportunities to make a public speech. It was in this speech that he introduced some of his now-famous ideas, including nonviolent protests.

The speech catapulted the reverend into the national spotlight and made him one of the front-runners in the Civil Rights Movement.

"Proud to be maladjusted" — Dartmouth College in 1962

Martin Luther King Jr.'s speech at Dartmouth College in 1962 is sometimes forgotten , but it's a great example of the reverend's powerful rhetoric. In the talk, he first explains the sociological term "maladjusted" as someone who cannot accept social norms and society. But King turns the entire term on its head, saying he is happy to be maladjusted if it means adapting to racism and a society built against him and his people.

"But I say to you, my friends, as I move to my conclusion, there are certain things in our nation and in the world which I am proud to be maladjusted and which I hope all men of good-will will be maladjusted until the good societies realize," he said in the speech. "I say very honestly that I never intend to become adjusted to segregation and discrimination."

In 1964, King was 35 years old and the youngest person to win the Nobel Peace Prize . At the time of his honor, it had been a year since his famous "I Have a Dream" speech and the country just passed the Civil Rights Act of 1964. Along with the honor, he was given $54,600, which he donated to the movement.

Here's a snippet of his acceptance speech :

"I must ask why this prize is awarded to a movement which is beleaguered and committed to unrelenting struggle, and to a movement which has not yet won the very peace and brotherhood which is the essence of the Nobel Prize," King said. "After contemplation, I conclude that this award, which I receive on behalf of that movement, is a profound recognition that nonviolence is the answer to the crucial political and moral questions of our time: the need for man to overcome oppression and violence without resorting to violence and oppression."

At the end of his speech, he called peace "more precious than diamonds or silver or gold."

In March 1965, Martin Luther King Jr. marched with 25,000 people from Selma to Montgomery, Alabama, to fight for African American voting rights. At the end of the march, the reverend gave his " Our God is Marching On " speech, which marked a turning point in the Civil Rights Movement. Instead of focusing on legal and political rights, King's speech prompted the movement to fight for economic equality.

At the end of the speech, King used a call-and-response technique that made this speech truly iconic.

"Beyond Vietnam: A Time to Break the Silence" — Riverside Church in New York City on April 4, 1967

King's speech " Beyond Vietnam: A Time to Break the Silence " is well known because of the debate it sparked. He gave the anti-Vietnam speech when the country still supported the war. King received extreme backlash , especially for attempting to unite the peace movement with the Civil Rights Movement. The reverend's controversial views caused him to lose many supporters, including African American followers. Many say this is the speech that made him a target, as he was assassinated exactly one year later.

"We are taking the black young men who had been crippled by our society and sending them 8,000 miles away to guarantee liberties in Southeast Asia which they had not found in Southwest Georgia and East Harlem," he said the speech.

Just ten days after his controversial "Beyond Vietnam: A Time to Break the Silence" speech, the reverend gave another iconic speech at Stanford University . This time, he focused on the inequality between whites and blacks in America. In " The Other America " he talked about how the poverty gap and economic injustice were a result of racism.

"One America is beautiful for situation … millions of young people grow up in the sunlight of opportunity," he says in the speech. "But tragically and unfortunately, there is another America. This other America has a daily ugliness about it that constantly transforms the ebullience of hope into the fatigue of despair … They find themselves perishing on a lonely island of poverty in the midst of a vast ocean of material prosperity."

In 1967, King visited the Hungry Club Forum , which was comprised of white politicians who met out of public view to discuss the idea of helping African Americans earn their rights. In May, King gave a speech highlighting the progress that had been made, but much of his speech focused on the three problems that blacks face: racism, poverty, and war.

Just one day before he was assassinated, King gave his final speech " I've Been to the Mountaintop ." He gave the speech to a packed church of workers protesting working conditions. In the talk, the reverend emphasized his main beliefs: unifying African Americans and the importance of nonviolent protests.

But the speech is most known for being oddly prophetic , seeming to predict his death just the next day, highlighting the fact that he has accepted his fate.

"Well, I don't know what will happen now," King said in his final speech. "We've got some difficult days ahead. But it really doesn't matter with me now, because I've been to the mountaintop. Like anybody I would like to live a long life, longevity has its place but I'm not concerned about that now ... And I've seen the Promised Land. I may not get there with you. But I want you to know tonight, that we, as a people, will get to the Promised Land."

He ended the speech with: "I'm happy tonight. I'm not worried about anything. I'm not fearing any man. My eyes have seen the glory of the coming of the Lord."