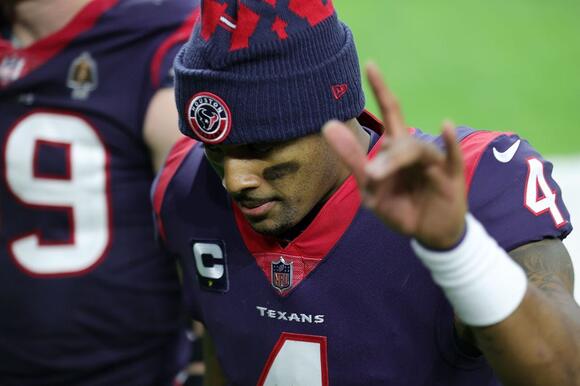 (SportsRadio 610) -- Despite Deshaun Watson having not officially requested a trade just yet, it appears more people are validating the idea he could be moved.

On Sunday, ESPN's Adam Schefter reported "there is a growing sense from people in and around the Texans' organization that Deshaun Watson has played his last snap for the team."

The Texans are among four NFL teams left with an opening for head coach, but league circles are taking note of the dysfunction in Houston.

This likely has nothing to do with Deshaun Watson, the Texans' star 25-year-old quarterback who had a career season in 2020, despite going 4-12.

The Texans' issues are at the top, with young CEO Cal McNair now on his fourth general manager in as many years. It's been reported Watson expected to be part of the process of hiring a general manager, but he was not, and friction between the quarterback and front office only grew from there.

There is also the looming issue of Jack Easterby's influence on McNair. Easterby is the vice president of football operations, but has a cozy relationship with McNair as one of his most trusted advisors. It is believed Easterby helped orchestrate the move to hire their new general manager Nick Caserio from the New England Patriots.

Really bad news from the Watson camp. Just as things were looking up for him. The Texans announcing trade talks. NFL not putting him on exempt. Looked like he was going to play 2021 season. Now police reports filed by 10 women alleging sex assault. This will have to open up a criminal case which changes the whole dynamic of the NFLs actions on the matter. Also, basically shuts down any trade interest from other teams. All of this precisely coordinated and coincidentally happening just as the season starts stinks of foul play.

NFL fans were surprised to learn this week that Deshaun Watson is attending the Houston Texans‘ training camp, despite still being involved in an ongoing sexual misconduct investigation. The NFL released a statement on Tuesday afternoon to address the matter. The league reaffirmed it is still reviewing the allegations which...

Albert Breer: Roethlisberger needed physique to be a necessity and now it is; silence around Deshaun Watson situation could have meaning

Schefter: Eagles 'better positioned' than any other team to trade for Deshaun Watson

The Eagles being linked to Watson is nothing new, as they have not shown a full commitment to Jalen Hurts as their starting quarterback and have three first-round picks in the 2022 NFL Draft.

Dak Prescott is getting ready to start camp. That's it. That's the reason. Dak Prescott is "better than'' Aaron Rodgers because the pouty Green Bay Packers QB isn't sure what he wants. And Deshaun Watson has "long been intrigued" by the idea of being traded to the Denver Broncos - with the Philadelphia Eagles still interested in the same concept. ... but with the law also quite interested in Deshaun.

If Houston Texans quarterback Deshaun Watson’s legal situation clears up, the Eagles might be in the driver’s seat to make a blockbuster trade. Sign up for Eagles Extra: Get exclusive news, behind-the-scenes observations and the ability to text directly with reporters. Watson, who is facing 22 civil suits on allegations...

If football weren’t such a cold, ruthless meritocracy, there’d be a little more sympathy and certainly a lot more patience for Tua Tagovailoa…and perhaps not as much chatter about the Dolphins being interested in Deshaun Watson. The Miami Dolphins’ second-year quarterback is the first to admit he wasn’t great as a rookie. But he certainly wasn’t terrible either.

In recent weeks the headlines surrounding Houston Texans’ quarterback Deshaun Watson and his ongoing legal battles have gone cold. However, in an appearance on NFL Network on Monday, NFL Insider Ian Rapoport provided insight into the situation, and more specifically into Houston’s current stance regarding its troubled star. READ MORE:...

Philadelphia Eagles TRADE rumors are BACK as ESPN’s Adam Schefter stirred the pot with the idea that IF Deshaun Watson is cleared of all allegations, then the Eagles would be the lead team to make a trade for the star QB. Schefter did note that he has not heard anything new, he just thinks that Philadelphia could be in play due to the fact that they have potentially three first-round draft picks next year in the 2022 NFL Draft. Thomas Mott breaks it all down on today’s Eagles News and Rumors Video. Guys, get yourself cleaned up with the help from Manscaped.

ESPN’s Adam Schefter on Deshaun Watson: ‘I would watch Philadelphia’

As the start of Eagles training camp closes in, the Eagles will enter training camp with a new starting quarterback this season. Hurts will presumably take off the starting role from former No. 2 overall pick Carson Wentz, who was traded to Indianapolis this offseason. But is Hurts the long-term...

Big news on former Clemson and current Houston Texans quarterback Deshaun Watson came out Sunday. According to multiple reports, Watson is expected to report to training camp with Houston's other (...)

Smith: Time for the Texans to take a stand against Deshaun Watson

Deshaun Watson is still using the Texans after quitting on them. Watson insists he is too good for the Texans — even though he hasn’t said anything publicly about Houston’s NFL team since the end of the 2020 season and continues to hide behind his Instagram page in late July of 2021.

The NFL remains in "fact-finding and monitor mode" with regard to Watson, who had 22 civil lawsuits filed against him earlier this offseason, NFL reporter Josina Anderson reports. Shortly after the end of the 2020 regular season, it leaked that Watson was dissatisfied with the Texans organization and as a...

On Monday morning, news broke that the Houston Texans have changed their tune and they are now willing to trade QB Deshaun Watson. Well, according to NFL insider Chris Mortensen, the Texans are demanding an absolute haul in exchange for Watson. Mortensen tweeted out just moments ago that the Texans’...

Deshaun Watson Landing Spots: Are the Eagles the leader in the clubhouse?

The Houston Texans have finally surrendered to reality. After refusing to entertain offers for months, the Texans have reportedly reversed course and are open to trading quarterback Deshaun Watson. Where are Watson’s likeliest landing spots?. What is the latest in the legal situation facing Deshaun Watson?. While the possibility of...

According to Tom Pelissero and Ian Rapoport, the Texans are now willing to listen to trade offers for QB Deshaun Watson. Pelissero adds this is not necessarily a new development but it is a stark change from when Texans GM Nick Caserio would just hang up the phone whenever Watson’s name was brought up in trade discussions.

The Houston Texans are now willing to listen to trade offers for Deshaun Watson and will seek at least three first round picks and more. Watson reported to camp with the Texans on Sunday after spending the entire offseason seeking a trade. Watson would still like a trade from Houston.

HOUSTON -- The Houston Texans will return to NRG Stadium on Tuesday for the start of the 2021 training camp. As of now, Deshaun Watson is not expected to be there. Sure, Watson has made it clear that his intentions are to be traded. The Texans, for now at least, have no desire to move him. Maybe that's because the asking price is too low. Maybe they believe the 25-year-old could have a change of heart?

There is reportedly a "strong sense" within the NFL that the Houston Texans intend to move on from quarterback Deshaun Watson. During an appearance on SportsCenter on Sunday, ESPN NFL insider Jeremy Fowler said a source close to Watson believes a trade will happen "sooner or later" provided his legal situation gets resolved. Watson is facing 22 civil lawsuits that allege sexual misconduct while receiving massages.