Lindy Ruff looking to get Devils back to the playoffs 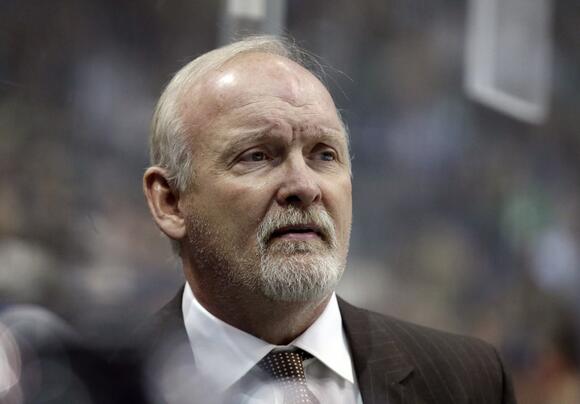 NEWARK, N.J. (AP) — Lindy Ruff is taking on the job of getting the New Jersey Devils back to the playoffs.

It’s no small task. The Devils have missed the postseason the past two seasons and seven of the past eight. Making things tougher in this COVID-19 season, they will be playing in a division where six of the eight teams made the expanded postseason.

The Devils (28-29-12) just missed that group after a 10-5-2 finish under interim coach Alain Nasreddine. They have some talent with goaltenders Mackenzie Blackwood and Corey Crawford, left wing Kyle Palmieri and young centers Nico Hischier and a bigger Jack Hughes. The defense is the concern.

“I want to create hope and the hope is that we have some unknowns, we have some young players that nobody has seen,” said Ruff, who spent the past three seasons as an assistant with the Rangers. “There’s an opportunity for these young players to step in and be difference-makers. We’ve added a couple of really good defensemen that I think can make our team better. We’ve we’ve added another goaltender which has given us two goaltenders. So I’m going to talk about the hope.”

If you look at Ruff’s career, he took over the Dallas Stars in 2013-14 and ended a five-year playoff drought in his first season. New Jersey last made the postseason in 2016-17 under John Hynes, who fired in December.

The players will definitely enjoy Ruff’s up-tempo style if they can remember to be responsible on defense.

“I think there’s excitement,” said center Travis Zajac, who is entering his 15th season in New Jersey. “We’re ready to get off to a good start and prove some people wrong, maybe surprise some people. I think when you look at our team, we did get better. We had some pieces. We have some younger guys that have had a year under their belt that they’re going to improve. So I think we’re a team headed in the right direction.”

The No. 1 overall pick in the 2019 draft had a tough rookie season. He finished with seven goals and 14 assists and was a minus-26.

Hughes has immense talent. He created a lot of opportunities. He just didn’t find the net. His other problem was he was teenager playing with men. They knocked him down repeatedly.

Hughes bulked up in the long offseason and should improve.

Believe it or not, the 22-year-old Hischier is entering his fourth season after being taken No. 1 overall in the 2017 draft. He had 14 goals and 22 assists in 58 games last season. His faceoff rate improved to a career-best 52% last season.

The Devils are hoping Hischier will be ready for the opener. He sustained a leg injury working out in Switzerland before camp and probably won’t participate in training camp.

The Devils can’t afford another start like last season, when they opened 0-4-2 and never recovered.

The first game set the tone. They led Winnipeg 4-0 with less than a minute left in the second period and lost 5-4 in a shootout.

Palmieri said the start showed how fragile the team was.

“We have to find a way even if the game doesn’t go well,” Palmieri said. “You’re going to get another shot at it a day or two later the way the schedule works, probably against the same team. So being fragile as a group isn’t something that we have an option for this year.”

Lots of new faces, with the most well known being the 36-year-old Crawford, who was signed as a free agent along with defenseman Dmitry Kulikov. New Jersey also picked up forward Andreas Johnsson and defenseman Ryan Murray in trades. Young forward Janne Kuokkanen, who was picked up in the deal that sent Sami Vatanen to Carolina, appears headed for the opening-day lineup. Ruff retained Nasreddine and Rick Kowalsky from the old staff and hired Mark Recchi, Chris Taylor and Dave Rogalski.

The Devils are in a brutal division with the Bruins, Sabres, Islanders, Rangers, Flyers, Penguins and Capitals. The season gets underway with consecutive home games against Boston on Jan. 14 and 16.

When you think of the Columbus Blue Jackets, Cam Atkinson is one of the first names that comes to mind. Drafted 157th overall in the 2008 draft, the 5’8 forward worked his tail off to crack the roster and gradually became one of the greatest scorers in the franchise’s history. But since becoming a regular in the 2011-12 season, Atkinson has played beyond the first round just once and the losing finally got to him.

Which Devil gets plucked from Seattle? My protection list.

Over the last couple of days there has been much anticipation of Seattle's expansion draft. Who to protect, or not, is the big question as every team will lose a player to the Kraken on July 21st. So, the. Burning Question is... who do the Devils protect? Or, better yet,...

Devils get Ryan Graves in trade with Avalanche for Mikhail Maltsev, draft pick

The Devils made an acquisition to bolster the blue line ahead of next week's NHL Expansion Draft and Saturday's trade freeze. The team landed defenseman Ryan Graves from the Avalanche in exchange for forward prospect Mikhail Maltsev and a second-round pick in the upcoming NHL Draft. Graves, 26, scored two...

Max Fried, Braves look to get back in the win column against Rays

After watching another late lead slip away Friday night, the Atlanta Braves will try to get back in the win column Saturday when they continue their series against the Tampa Bay Rays. Atlanta homered three times in the game and had a 6-4 lead but was unable to hang on falling 7-6 in 10 innings Friday. The Braves remain four games back in the NL East standings thanks to New York losing to Pittsburgh Friday, but they desperately need to string some wins together.

The first Boston College related movement in the 2021 NHL Entry Draft isn’t a draftee, but a trade. BC alumnus Cam Atkinson has been traded by the Columbus Blue Jackets to the Philadelphia Flyers, joining fellow former Eagle Kevin Hayes in Philly. In return, the Blue Jackets will receive Jakub Voracek.

Blackhawks Talk Podcast: Who Should Chicago Draft at No. 12 Overall?

Podcast: Who should Blackhawks draft at No. 12 overall? originally appeared on NBC Sports Chicago. On the latest Blackhawks Talk Podcast, Pat Boyle and Charlie Roumeliotis discuss the expansion draft results that saw the Seattle Kraken go off the board with their Chicago pick by taking forward John Quenneville. They also talk about Stan Bowman addressing the media for the first time since the 2010 allegations against former video coach Brad Aldrich, whether Jonathan Toews will be ready to go for the season opener and which player the Blackhawks should draft at No. 12 overall.

Will Jonathan Toews be able to return to the Blackhawks next season?. And if so, how effective will he be after dealing with a medical issue that left him drained and lethargic for long periods of time?. Those are questions we don't have answers to yet, but GM Stan Bowman...

Everyone Helped New Jersey Devils Get Dougie Hamilton On Friday

Carolina Hurricanes defenseman Dougie Hamilton (19) bounces the puck on his stick before the game against the Dallas Stars at PNC Arena. Mandatory Credit: James Guillory-USA TODAY Sports. The New Jersey Devils have surprisingly been named as a suitor for top free agent (outside Alexander Ovechkin) Dougie Hamilton. Most Devils...

Stephen Whyno: Full statement from Canadiens GM Bergevin on drafting Logan Mailloux. “By drafting prospect Logan Mailloux with the 31st overall pick, the Montreal Canadiens organization not only selected a promising hockey player, but also a young man who recently admitted to making a serious mistake. The Canadiens are aware of the situation and by no means minimize the severity of Logan’s actions. Logan understands the impact of his actions. His recent public statement is a genuine acknowledgment of his poor behaviour and the first step on his personal journey.

A familiar bearded face is going back to Columbus, and the Blue Jackets' longest tenured player is off to Philadelphia. The player the Flyers got back? Well, Cam Atkinson is already in love with Philly’s favorite, familiar orange-bearded face. The Flyers sent Jakub Voracek to the Blue Jackets for Atkinson...

The Flyers’ busy summer continues, and as we’re just settling into day 2 of the draft, the Flyers dropped another trade on us, and it’s a big one. The Flyers have announced that they’ve traded Jake Voracek to the Columbis Blue Jackets in exchange for Cam Atkinson. *Bob McKenzie voice* the trade is one for one.

The Southeast Sun Devils are nearing the end of their regular season, after dropping a pair of games over the weekend. They played the Regina Saints on Sunday in Estevan and Alameda, losing both games 12-3 and 12-7. Now, they've got a packed schedule with six games in the next...

Haggerty: NHL Draft Day Opener Is A Good One For Boston Bruins | BHN+

Let’s start by fully admitting the Boston Bruins still have a metric ton to accomplish when it comes to building their roster for next season. They still have to land one, if not two, legit defensemen including one that should be a left-shot, top-4 D-man capable of playing big minutes and bringing veteran poise to a young group of defensemen. Call it the “Ryan Suter” role if you will because that’s the kind of guy that would be a perfect fit for the Black and Gold. They still need a right wing that can score goals in a top-9 role, and they need energetic, physical new faces in a fourth line makeover that’s happening on the fly.

Renaud Lavoie: With the start of free agency drawing closer, it seems less likely that Tampa Bay Lightning will be trading the rights to pending UFA defenseman David Savard. Chris Johnston: KHL defenseman Chris Wideman could sign with the Montreal Canadiens. He’s eligible to sign a deal on Wednesday. Red...

Chambers: Avalanche’s first domino (Cale Makar) has fallen. Will the second (Gabe Landeskog) get pushed along?

Star young defenseman Cale Makar and the Avalanche have given the NHL team a genuine chance to re-sign veteran left wing and team captain Gabe Landeskog. The first and most important off-season domino fell on Saturday when, during the NHL draft, Makar agreed to a six-year, $54 million contract extension as a restricted free agent. His $9 million annual cap hit ties him as the NHL’s fourth highest-paid defenseman and accounts for 11% of the Avs’ $81.5 million salary cap.

Incoming freshman defenseman Scott Morrow became the earliest UMass hockey draft pick since Cale Makar when the Carolina Hurricanes selected the Shattuck St. Mary’s product 40th overall Saturday. Makar, who signed an extension with the Colorado Avalanche on Saturday, was the fourth overall pick. This is the fifth year in...

Adam Fox and his agent Matt Keator have to be smiling from ear-to-ear after the deal Cale Makar just signed. There’s no doubt that Makar’s camp used the deal 21 year-old defenseman Miro Heiskanen inked a week ago. The Stars awarded Heiskanen an 8 year deal worth $8.45 million per...

After every NHL draft, I put a summary of my thoughts and general reaction to how the New Jersey Devils performed for that day. I know full well that it takes about five years before one can truly judge a draft class as being successful or not. Some prospects grow. Some do not. Some surprise and achieve beyond any reasonable expectations. Some wither into the ether. So I would recommend taking this following opinion piece about the Devils’ 2021 Draft class with a grain of salt.