Chaos and uncertainty loom over the holidays, and it’s unclear at this point if there will be a government shutdown on Monday at midnight after President Donald Trump demanded last-minute changes on a must-pass spending bill and COVID-19 relief package.

During remarks Tuesday night, Trump signaled he would not sign the bill, which was passed with overwhelming support late Monday, unless Congress included $2,000 direct checks to Americans. 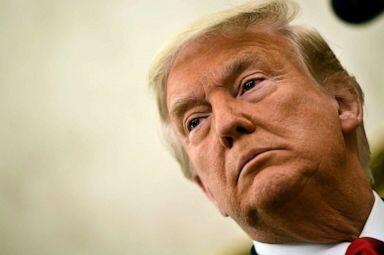 The current legislation awaiting the president’s blessing would give $600 in stimulus payments to Americans making less than $75,000. It would also provide $300 in enhanced unemployment insurance benefits, nearly $300 billion for the small business loan program, and billions more in vaccine distribution, contact tracing and testing.

The bill took months to negotiate among Congressional leadership and was finalized just days before 12 million people are set to lose benefits if pandemic-era provisions to expand unemployment eligibility expire. Millions across the country face eviction if a federal moratorium expires at the end of the year.

The bill was attached to a must-pass $1.4 trillion omnibus spending deal that would fund the government through September 2021. A short-term funding bill is set to expire Monday night if Trump doesn't sign the package into law.

As of Thursday afternoon, the bill was still in the enrollment period and it had not yet been transmitted to the White House.

"I will be talking to the Speaker, to the members of the Democratic Caucus, to determine exactly how we want to move forward. But we're not going to let the government shut down, nor are we going to let the American people down, from our perspective," House Majority Leader Steny Hoyer, D-Md., said during a press conference on Capitol Hill Thursday.

House Democrats will consider options on another short-term funding bill and noted that House Speaker Nancy Pelosi is having ongoing discussions with Treasury Secretary Steven Mnuchin and the administration, Hoyer said.

Hoyer said he's hoping Trump comes to his senses before Monday and signs on the dotted line.

Asked if he thought tying the omnibus spending bill to the COVID-19 relief bill was a mistake, Hoyer said no.

"I may say perhaps the only mistake was believing the president and Secretary Mnuchin when we were told that the bill we passed would be signed by the president of the United States," Hoyer said. 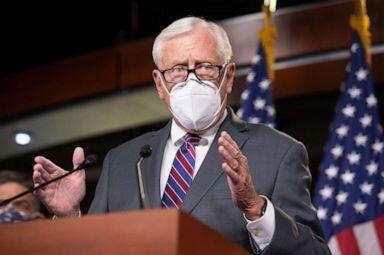 During the press conference, an emotional Rep. Debbie Dingell, D-MI., slammed Trump for his last-minute antics that have resulted in delaying stimulus relief for hurting Americans.

"It is Christmas Eve. But it is not a silent night," Dingell said. "All is not calm, for too many, nothing is bright."

"And then the president, when we finally thought that we'd be able to give people help -- that's what people need, help! -- and be able to begin to continue to work on this in January, [he] doesn't give a damn about people. He threw more fear, he threw kerosene on a campfire!" Dingell said in a raised voice.

"I beg the president to know how many people in this country are scared, fearful ... hungry and that [we] must get a bill done so that we are helping Americans," Dingell said.

On Thursday, Trump was spotted at his golf club in West Palm Beach, Florida, where he is spending the Christmas holiday.

Democrats and Republicans alike are calling on Trump to sign the measure as is.

Sen. Roy Blunt, R-Mo., told reporters at the Capitol Thursday morning that he remains hopeful Trump will sign the bill in the coming days. If Trump doesn't sign the bill, Blunt said the path forward becomes "a lot more challenging."

"The best way out of this is for the president to sign the bill and I still hope that’s what he decides to do," Blunt said. “Let's hope the best way works -- the second-best way is a lot more challenging."

But, Blunt added, he has "no idea what the president plans to do."

The Senate is not expected to return to the Capitol until Tuesday, and Blunt said he's doubtful Senate Majority Leader Mitch McConnell will call members back in sooner. Still, he said, he thinks Trump will avert a shutdown.

"I believe we will not shut down," Blunt said. "I hope the president looks at this again and reaches that conclusion that the best thing to do is sign the bill." 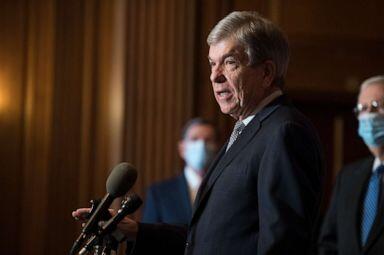 Hoyer was on the House floor Thursday morning to request unanimous consent on a bill that would send $2,000 in stimulus checks to Americans.

The unanimous consent vote attempted to call Trump's bluff and force Republicans to go on the record for their opposition to increasing direct payments from $600 to $2,000.

After Hoyer made the unanimous consent request, he was notified by the chair that his request did not have clearance from House Minority Leader Kevin McCarthy and so his request was denied.

Just after the vote, Pelosi said in a statement that the House will hold a recorded vote on the floor on Monday on a standalone bill on the $2,000 checks, which will put Republicans officially on the record. On Monday, the House will also hold its veto override vote on the defense policy bill.

“Hopefully by then the president will have already signed the bipartisan and bicameral legislation to keep government open and to deliver coronavirus relief," Pelosi said in the statement.

MORE: Photos document US eviction crisis as families struggle during the pandemic

Blunt was asked if he thought an effort to get $2,000 direct checks approved, if passed by the House next week, would get the necessary support in the Senate.

"It would not," Blunt said.

Separately, a GOP request to rollback U.S. aid to foreign countries, which is a part of the omnibus spending package and was requested in the president’s budget, was also denied on the floor because the bill did not have clearance from Democrats.

Blunt cautioned against reopening negotiations on any part of the omnibus spending bill.

"If you start opening that part of the bill up, it's hard to defend not opening the whole bill up. It took us a long time to get to where we are. I think reopening that bill would be a mistake," Blunt said.

Blunt said Trump's decisions in the final days of his administration are preventing Republicans from celebrating his many accomplishments.

"There’s a long list of positive things that we’d be talking about today if we weren’t talking about this," Blunt said. "And I think that would be to the president’s advantage if we were talking about his accomplishments rather than questioning decisions late in the administration."

New excerpts from Maggie Haberman’s interviews with Donald Trump reveal the former president’s thoughts on spurious voter fraud lawsuits, Florida Governor Ron DeSantis, Senator Mitch McConnell and what he was doing as a mob of his supporters breached the US Capitol on 6 January, 2021.The House select committee investigating the attack will reconvene for its first public hearing since July on 28 September.Congressman Jamie Raskin said the panel is “aware” of allegations that a White House switchboard patched a call from a rioter as the attack was underway, among “thousands of details” that the committee is investigating.US Rep Adam...
POTUS・1 DAY AGO
WashingtonExaminer

President Joe Biden surprised viewers Friday when pausing his speech to acknowledge a woman in the crowd he said he knew when she was 12. “You gotta say hi to me,” Biden said during a speech at the National Education Association headquarters in Washington, D.C. “We go back a long way. She was 12 — I was 30. But anyway, this woman helped me get an awful lot done.”
WASHINGTON, DC・4 DAYS AGO
Newsweek

Former liberal MSNBC host and sportscaster Keith Olbermann revealed on Monday that he'd dated Democratic Arizona Senator Kyrsten Sinema over a decade ago. Olbermann, who currently hosts a podcast, didn't spare his disappointment with the moderate senator, claiming that she previously was even more liberal than him. The ex-SportsCenter and...
ARIZONA STATE・18 HOURS AGO
ABC News

Abscam figure sent back to prison in ballot stuffing case

PHILADELPHIA (AP) — A former congressman from Philadelphia who went to prison over the 1970s-era Abscam scandal was sent back to prison Tuesday at age 79 in a ballot stuffing case. Former Democratic U.S. Rep. Michael J. “Ozzie” Myers was sentenced to 2 1/2 years in prison by a judge who questioned whether he had learned any lessons over the years. Myers admitted he had worked with election officials to pad the vote tallies of his political consulting clients. Some were running for city judgeships. “Myers would solicit payments from his clients in the form of cash or checks as ‘consulting fees,’ and then use portions of these funds to pay election officials to tamper with election results,” U.S. Attorney Jacqueline Romero said in a statement after the hearing. “Voting is the cornerstone of our democracy. If even one vote has been illegally cast or if the integrity of just one election official is compromised, it diminishes faith in process,” she said.
PHILADELPHIA, PA・2 HOURS AGO
AFP

The UN reaffirmed its commitment to Ukraine's "territorial integrity" on Tuesday, as pro-Moscow authorities in several parts of the war-torn nation began claiming victory in annexation votes condemned internationally as a sham. "The United Nations remains fully committed to the sovereignty, unity, independence and territorial integrity of Ukraine, within its internationally recognized borders," Under-Secretary-General for Political and Peacebuilding Affairs Rosemary DiCarlo told a meeting of the UN Security Council.
WORLD・3 HOURS AGO