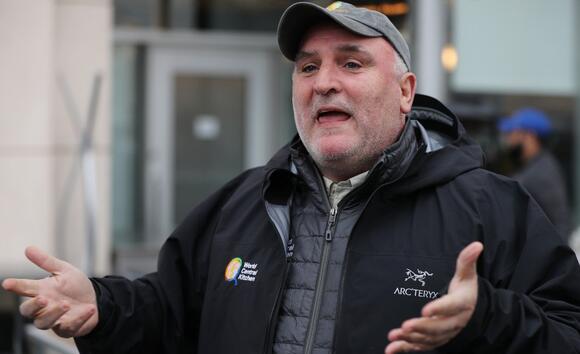 Celebrity chef José Andrés responded to criticism directed toward him by conservative pundit Ann Coulter , who called him “some nut foreigner” after he advocated for stronger hunger relief programs in the U.S.

Coulter tweeted on Tuesday, “Some nut foreigner was just on MSNBC demanding that Biden appoint a ‘Food Czar’ to solve the ‘national hunger crisis.’ A dozen federal food programs is not enough!” The columnist included a link to a list of federal nutrition programs on the National Conference of State Legislatures' website.

Andrés, a Spanish American chef and restaurateur, responded to the tweet on Wednesday.

“I’m so proud you called me a Nut,” Andrés replied to Coulter. “Nuts are fruits where the ovary walls become hard so I can be Protector of my people and everyone else. Nuts like me? energy-dense,nutrient-rich, what we need to feed USA. Nuts?You right girl, ‘foreigners’ like almonds+pistachios!Happy holidays!”

"His name is @chefjoseandres. He’s helped feed millions of Americans & people across the world in times of need, after disasters. He’s a small-business owner/entrepreneur who employs thousands through his restaurants. Oh, and he’s an American citizen, who makes our country great."

Coulter appeared to be referring to an interview Andrés took part in on Tuesday where he spoke on the national hunger crisis in the U.S.

Andrés is the founder of World Central Kitchen, a nonprofit organization that works to combat food insecurity in vulnerable populations around the world, and was asked by MSNBC host Andrea Mitchell for possible solutions to help the hunger crisis.

“This is very simple. This is the biggest emergency as a country we face in the last 100 years. We have ... a government agency called FEMA [the Federal Emergency Management Agency], which is the emergency organization. We have hunger crisis, we have people who’re really suffering through this pandemic,” said Andrés.

The chef and activist suggested that FEMA take immediate action, saying "they don't need any approval from Congress, they already have [the] Disaster Relief Fund. The White House can do this without any legislation."

Feeding America, the largest hunger relief organization in the U.S., recently said that the U.S. was heading toward recession-era hunger figures, when more than 50 million Americans lacked food security.

Andrés has repeatedly suggested that the U.S. establish the position of a "food czar" to address the issue.

"I'm recommending we need to have not even a food czar, we almost need a Secretary of Food. We need to understand one thing that food is more than the USDA," Andrés said in an interview with Yahoo News.

"Food is more than just all the mechanics of a smart agricultural system. Food is immigration, food is health, food is national security, food is job creation, food is economic growth, food is very much at the heart of every single part."

Lauded chef and humanitarian José Andrés picked up another accolade on Tuesday, when he collected a "Courage and Civility Award" from billionaire Amazon founder Jeff Bezos. The award isn't just some bookshelf decor: It comes with $100 million that the recipient can distribute to the charities of his choosing. The announcement came at a high-profile moment for Bezos, who also owns he Washington Post. Bezos revealed the new award and gave out the inaugural pair at the conclusion of a news conference following his flight to space aboard a rocket developed by his company, Blue Origin. The other award went to CNN commentator and activist Van Jones.

Who is chef José Andrés and what restaurants does he own?

BEFORE winning a huge cash prize from Jeff Bezos, chef José Andrés was credited for bringing Spanish influence to the American food scene. Andrés has many titles before cash prize winner: chef, restaurateur, and non-profit founder. Who is José Andrés?. Andrés, 52, grew up in Spain and enrolled in culinary...

Celebrity chef José Andrés and CNN political commentator Van Jones are the first two recipients of Jeff Bezos ’s new philanthropic award, giving both men $100 million to put towards any charity or nonprofit of their choice. Bezos introduced the initiative, dubbed the “Courage and Civility Award,” on Tuesday, after...

Meghan McCain said Friday that Democrats should give former President Trump “a little credit” for the COVID-19 vaccine. During Friday’s episode of “The View,” McCain said giving Trump credit for the vaccine would help show that getting vaccinated is a bipartisan issue. “If the White House truly wanted to show...

Former President Donald Trump decried Senate Minority Leader Mitch McConnell for his "weak leadership" of the Republican Party. "Under the weak leadership of Mitch McConnell, Senate Republicans continue to lose. He lost Arizona, he lost Georgia, he ignored Election Fraud and he doesn’t fight," Trump said Thursday. "Now he’s giving Democrats everything they want and getting nothing in return."

If I weren’t already staunchly pro-vaccination, the vaccine zealots would turn me against the COVID shot. The proof that they’re practicing religion and not science is their refusal to acknowledge the great heaping hunks of immunity a person gets from natural infection. Obviously, you don’t want to contract COVID just...

Jeff Bezos had one more big surprise following his brief jaunt to space. The Amazon founder, who recently completed a trip aboard the New Shepard rocket from his aerospace company Blue Origin, announced plans to donate $100 million each to chef José Andrés and TV analyst Van Jones. In a...

Moments after returning from a brief trip to space on Tuesday, Amazon founder Jeff Bezos announced he was giving away $200 million in charitable donations as part of a new philanthropic initiative. Bezos made the announcement at a press conference following Blue Origin's first human-crewed space flight, which he was...

First Lady Jill Biden underwent a "successful" medical procedure Thursday at the Walter Reed National Military Medical Center after she suffered an injury to her foot at a beach in Hawaii. The first lady's hospitalization came after she stepped on an object while walking on the beach in Hawaii last week, her press secretary Michael LaRosa said in a statement. Biden visited Hawaii on Sunday on her way home from leading the U.S. delegation to the 2020 Tokyo Olympics.