6abc Action News
2020-12-03
A South Jersey high school football game quickly turned into tragedy a little more than a year ago. Isaiah Green witnessed it. At the time, he was a Pleasantville High School senior up in the bleachers. Now he released a book about the terrifying experience entitled, "Through My Eyes." "I was just like him going to games wanting to be like the football players," Isaiah said. 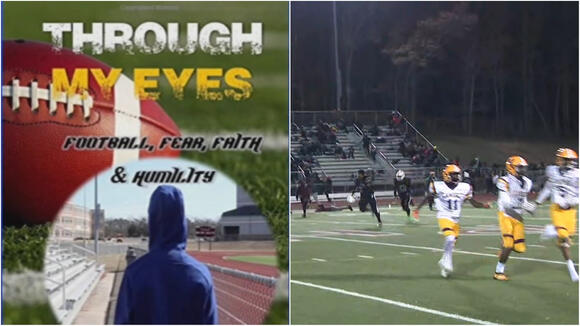 The book is dedicated to 10-year-old Micah Tennant. He was shot and killed in the stands.

Raw video: At least two people were injured Friday night in a shooting at a high school football game in Pleasantville, New Jersey.

Pleasantville was playing Camden High School in a championship game when the shots rang out. "I heard 7-8 gunshots and just hear chaos erupt and see it, too. People were running crying, screaming, jumping over things," he described. READ MORE: Accused gunman in Pleasantville high school football shooting appears in court

Isaiah was in the bleachers that night with his grandfather. He feared for his own life. "At the time I thought I was going to die for a moment, and that was very scary to think about," Isaiah said. Isaiah works hard to keep Micah's memory alive. He never knew Micah personally. "I'm going to continue to push this book until everybody knows his name and everybody uses this not as an event they remember, not just as a tragic moment, but as a moment we've learned from and get better and heal as a society," Isaiah reflected. Isaiah is now a freshman at Rowan County Gloucester County. He's majoring in criminal justice. He hopes his book "Through My Eyes" sparks changes against gun violence. SEE ALSO: Atlantic City park named in honor of boy killed during football game shooting

A South Jersey boy who died after being shot during a high school football game is being honored with a playground in his name.

Every Friday night after Action News at 11 pm, Sports Reporter Jeff Skversky will bring you High School Highlights from all across the region. Plus, we'll feature one special showdown every week with extended highlights!
HIGH SCHOOL・4 DAYS AGO