NFL coaches fired: Jon Gruden out, who will be next coach fired?

By Matt Johnson
Sportsnaut
2 days ago 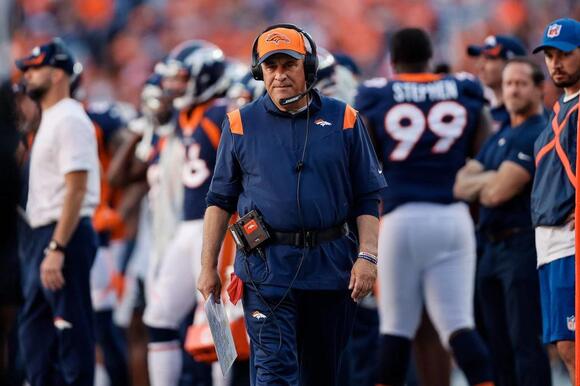 The 2021 season is underway and that means the coaching hot seat is starting back up with a new wave of names who will be among the next NFL coaches fired.

Change is inevitable in the National Football League as organizations set higher standards for excellence and patience wears thin. While change is expected, no one saw the Jon Gruden story coming. He became the first of the NFL coaches fired, but he won’t be the last.

With that in mind, let’s examine the head coaches who could be fired by the end of the 2021 season.

Gruden, who signed a 10-year, $100 million contract in 2018, came under fire before Week 5 after the Wall Street Journal reported the iconic coach used racially charged language when referring to NFLPA executive DeMaurice Smith in 2011. He later apologized for the email, which was sent when he worked for ESPN, saying it came at a time of great frustration. 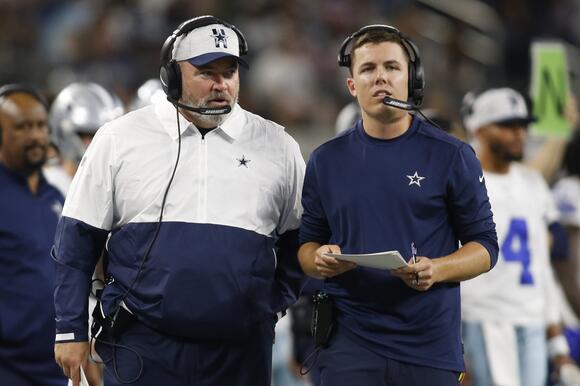 The emails were obtained as part of the NFL’s investigation into the Washington Football Team. On Oct. 11, the New York Times reported there were additional emails from 2011-2018, containing sexist, homophobic, misogynistic and racist language aimed at commission Roger Goodell and others within the league.

Shortly after the story broke, Gruden resigned from his position. The Raiders have named Rich Bisaccia as their interim coach.

NFL coaches on the hot seat: Who will be the next NFL coach fired?

It was easy to see this coming from a mile away. The Jacksonville Jaguars thought they struck gold with Urban Meyer, basically ignoring the search process because they only wanted one guy. As we’ve already seen, getting locked on to a coach with zero NFL experience can backfire. 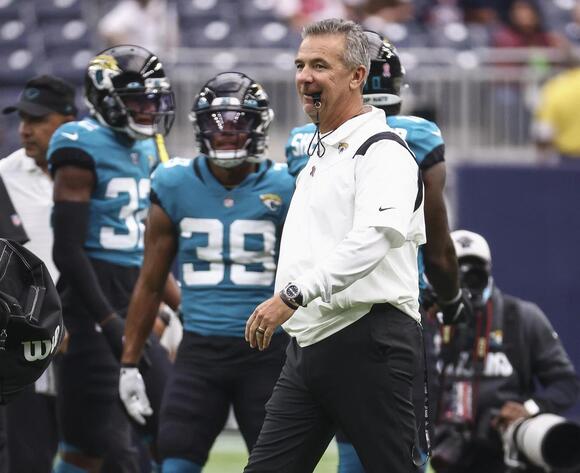 Meyer hired his friend Chris Doyle months into the job, despite multiple claims from Iowa of his racism towards student-athletes. While Doyle resigned a day later, following the backlash, it showed Meyer’s naivety for how many things won’t be tolerated in the NFL. Naturally, Meyer followed that up with the failed Tim Tebow experiment, fines for violating the NFL’s practice rules, he is treating NFL players like college athletes and creating additional concerns.

Keep in mind, Meyer was among our favorites to be one of the first NFL coaches fired before the video came out. Now he has lost what little respect he had left from the locker room. While he is no longer winless, it would still be a surprise if Meyer isn’t among the NFL coaches fired after the season. 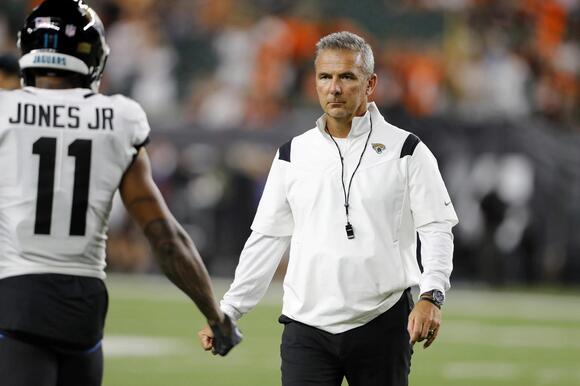 The Chicago Bears should have fired Matt Nagy this past offseason. But he, along with general manager Ryan Pace, survived because the team went on a late winning streak to sneak them into the playoffs. But Chicago based its decision off wins against the likes of the Houston Texans and Jacksonville Jaguars and they are paying the price for it now. 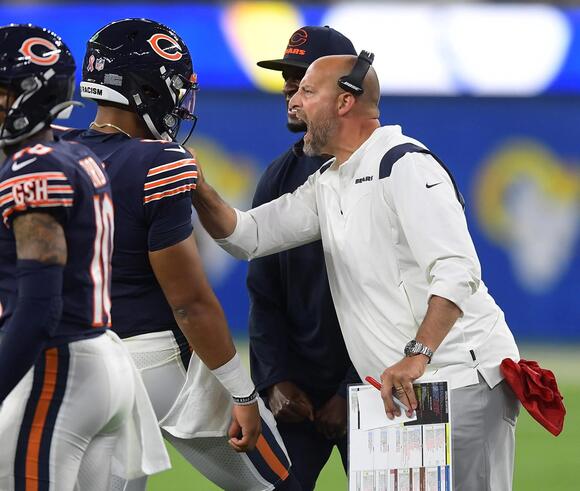 In the last three seasons, Nagy’s record sits at 19-19 and the offense has gotten worse with each passing year. He is hurting the development of Justin Fields , the player this franchise needs to build around. When did Fields start getting more comfortable as a starter? When Nagy gave play-calling duties to offensive coordinator Bill Lazor. Nagy serves no purpose to this team.

Denver Broncos head coach Vic Fangio narrowly avoided being one of the NFL coaches fired this past offseason. Entering the summer on the hot seat, a 3-0 start to the season injected hope into the organization. The optimism is quickly fading away. 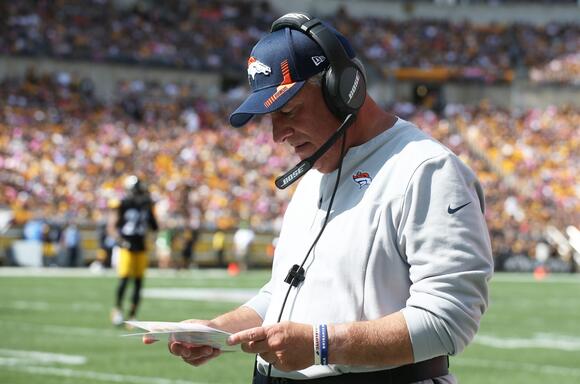 Realistically, the Broncos are headed for seven wins. It could be worse than that considering this defense was just shredded by a Browns’ lineup filled with backups. Start the countdown, it’s a matter of weeks until Fangio is gone. Besides, Denver might want a head-coaching vacancy to hire Nathaniel Hackett before pursuing an Aaron Rodgers trade.

Maybe there’s a reason everyone questioned the New York Giants for hiring Joe Judge out of nowhere. Off the consensus list of NFL coaching candidates, many were stunned when New York chose the New England Patriots’ special-teams coordinator. Unsurprisingly, another attempt at finding the next Bill Belichick is failing.

Treating professional athletes like they are still in college or high school almost never works. We’re also not seeing any change or growth in his second season. New York averaged 5.1 penalties per game in 2020 and is averaging 7.7 this year. Judge doesn’t understand how analytics should be used and it’s hard to see this team winning more than six games in 2021. Yet, ownership won’t change their ways and that might make him safe. 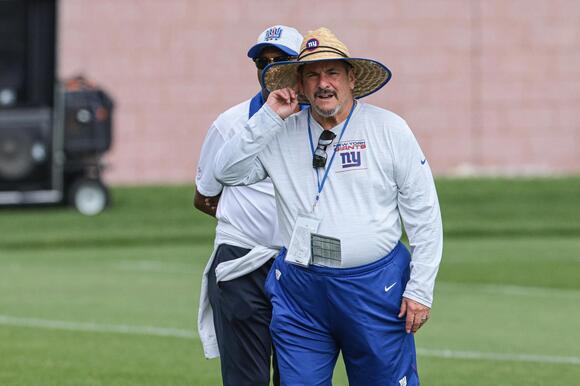 Unfortunately for the fans, this is headed in a predictable outcome. New York fires Gettleman in 2022 and brings in a new general manager. But the Mara family won’t let the new executive make the coaching decision, requiring Judge hangs around another year. Fast forward to October 2022, we’ll be talking about why Judge needs to be among the NFL coaches fired in the next cycle.

The most accomplished name among our candidates for NFL coaches fired, Mike Zimmer seems to be dealing with some pressure from ownership. Following a 7-9 season, the Vikings got off to a slow start and every win to get back to the 3-3 record has come down to the wire.

But the focus on Meyer isn’t strictly on the regular season. Minnesota is in a short window and we’re not even thinking about them as a Super Bowl contender. If this team doesn’t make the playoffs or gets knocked out immediately, Zimmer could be in trouble. 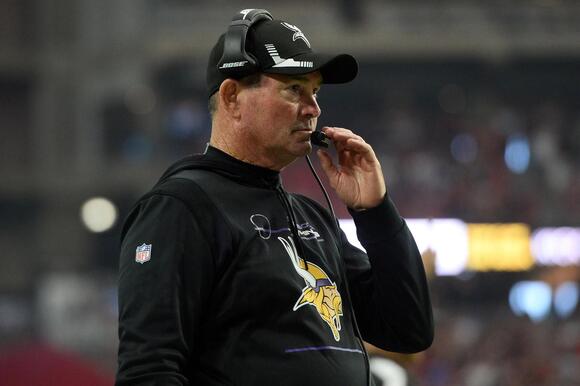 Who will be the next NFL coaches fired?

the NFL is totally controlled by the racist blacks on the inside and out. if they don't get their way they cry and protest. they dominate the league by discriminating the lack of attention paid to white players as early as the college recruitment process. wite athletes at positions such as running back wide receiver and any defensive position need not apply. the proof comes when you see any white player in NFL succeed. and ask why if he can dominate why aren't there so many more white players.

All the caches getting fired is so hard to comprehend because this has been a season unlike any season ever! The difficulties that were evident with Covid and many players opting out and different protocols by NFL all caused emotional dismay. Owners should understand and not blame coaches

Colin Kaepernick hasn’t played professional football in five years, but the 33-year-old quarterback isn’t giving up yet. The former NFL quarterback revealed in a new interview with EBONY magazine that he’s still training as hard as ever, hoping a team will sign him. Kaepernick last played in the NFL in...
NFL・12 DAYS AGO
The Spun

Tony Dungy Getting Criticized For What He Said About Jon Gruden

The Washington Football Team has made headlines again after Jon Gruden resigned as head coach of the Las Vegas Raiders last week over emails that revealed racist, misogynistic, and homophobic remarks made by the then-ESPN analyst to former team executive Bruce Allen. But one former Washington employee says the team has a much bigger problem.
NFL・7 DAYS AGO
USA TODAY

Amari Cooper said he though Jon Gruden, who resigned as Raiders coach on Monday night, was impulsive but never racist or misogynistic.
NFL・11 DAYS AGO

Despite two playoff appearances in four seasons, Chicago Bears head coach Matt Nagy has been at the helm of a
NFL・4 DAYS AGO
FanSided

This past weekend, former Minnesota Vikings wide receiver Randy Moss had an emotional reaction to the news surrounding former Las Vegas Raiders head coach Jon Gruden. Throughout his tenure with the Minnesota Vikings and during the rest of his NFL career, Randy Moss was always been someone who wore his heart on his sleeve. To this day, if Moss has something on his mind, he’s never afraid to reveal his thoughts to the public.
NFL・14 DAYS AGO
The Guardian

In his dealings with those in his immediate orbit, the former Raiders head coach long ago showed us where he thinks a Black man’s place in football should be
NFL・12 DAYS AGO

282 shares Share this on Twitter Share this on Facebook Flip into Flipboard Share this on Reddit Share via Email. San Francisco 49ers general manager John Lynch won a Super Bowl on a Jon Gruden-coached team — the 2002 Tampa Bay Buccaneers. Having played for Gruden, Lynch was shocked by the comments that led to the coach's departure from the Las Vegas Raiders.
NFL・4 DAYS AGO
The Independent

Donald Trump Jr has defended Jon Gruden, the disgraced head coach of Las Vegas Raiders who resigned this week amid allegations of homophobia and racism. The eldest son of former president Donald Trump called for the National Football League (NFL) to release emails and messages from all team owners and executives.
NFL・13 DAYS AGO
FanSided

Colin Kaepernick should have been cut for kneeling during the national anthem, according to a newly uncovered email exchange between former Las Vegas Raiders coach Jon Gruden and ex-GM Bruce Allen of the Washington Football Team. “They suspend people for taking amino acids, they should cut this f**k,” Gruden wrote in an email to Allen, according to Yahoo Sports. Kaepernick has not played in the National Football League since 2017, when he opted for free agency. When Kaepernick was not re-signed, he filed a grievance against the NFL, alleging a conspiracy by the owners. The lawsuit was eventually settled. Starting in 2016, Kaepernick...
NFL・10 DAYS AGO

Jon Gruden had to step down from his post as head coach of the Las Vegas Raiders after numerous e-mails leaked in which the coach used homophobic, sexist, and racist language. Now, Gruden is claiming that the truth will come out, although he remains a social pariah in league circles. Many are worried that more e-mails will be revealed that paint other prominent figures in a bad light, however, that still remains to be seen.
NFL・2 DAYS AGO
102.5 WDVE

Blink and you would have missed Su'a Cravens' time with the Denver Broncos. Acquired via trade from the Washington Football Team in 2018, Cravens survived the changing of the head-coaching guard in Denver — only for a time. Out went Vance Joseph, in came Vic Fangio. As soon as Fangio...
NFL・13 DAYS AGO
Yardbarker

Denver Broncos head coach Vic Fangio was still fuming on Monday over the Baltimore Ravens’ decision to run a play rather than taking a knee at the end of their game on Sunday, but John Harbaugh clearly does not regret it. The Ravens were leading 23-7 when they got possession...
NFL・22 DAYS AGO

DeMaurice Smith was furious. I don’t blame him. But does he know how I feel? Does he even care?. The NFLPA boss was all-in with Jon Gruden’s sacking as Raiders coach. Gruden’s revealed racist, sexist and otherwise hateful missives would not be quietly indulged, especially by the African-American head of the pro football players’ union.
NFL・3 DAYS AGO
Sportsnaut

When the Denver Broncos kicked off the 2021 NFL season with a 3-0 start, many thought the pieces might finally
NFL・3 DAYS AGO
thecomeback.com

Jon Gruden has five words in response to email scandal

The world hasn’t heard too much from Jon Gruden since he resigned as head coach of the Las Vegas Raiders following racist and homophobic emails that went public. The Raiders have since moved on and some players have even expressed relief from the new atmosphere on the sidelines. Meanwhile, there are reports that owner Mark Davis is upset with the NFL behind the scenes.
NFL・4 DAYS AGO
USA TODAY