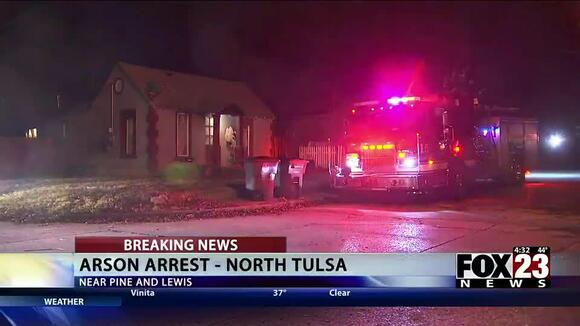 TULSA, Okla. — A man was taken into custody early Thursday after fire investigators say he set at least one home on fire.

Fire Marshal Andy Teeter with the Tulsa Fire Department said investigators were looking into a string of fires near E. Pine Street and North Atlanta Ave. and saw a man throw a tire on fire on the roof of a home that was damaged in a previous fire just before 1 a.m.

Investigators then chased the man and was able to take him into custody, Teeter said.

Around the same time, firefighters responded to a second house fire and a car fire on North Atlanta Ave., Teeter said.

“We suspect this is tied to other fires that occurred in the area,” Teeter said.

Since Oct. 23, there have been 15 fires in the area that have had similar characteristics and could be linked, Teeter said.

“We’ve come to know many of the folks around here,” Teeter said. “Not only the people that have been affected but also people of the area.”

LOUISVILLE, Ky. — A Kentucky woman admitted to killing a man and then hiding his body in the crawl space of a suburban Louisville home, authorities said. Sara McQuilling, 40, of Louisville, was arrested Friday and charged with murder, abuse of a corpse and theft by unlawful taking or disposition of an automobile, WLKY reported.
LOUISVILLE, KY・14 HOURS AGO
FOX 23 Tulsa KOKI

BEREA, Ohio — An Ohio haunted house worker admitted to authorities he suffered a lapse in judgment when he brought a bowie knife from home to give patrons a little real-life scare, but his realization came a little late for one unlucky thrill seeker. According to WBNS, police in Berea...
OHIO STATE・9 HOURS AGO
FOX 23 Tulsa KOKI

HANCOCK COUNTY, Miss. — The body of a Baton Rouge toddler was found in a remote area of Mississippi on Sunday, two days after she was reported missing, and her stepfather has been arrested in connection with the death. Pearl River County Coroner Derek Turnage confirmed to the Sun Herald...
HANCOCK COUNTY, MS・7 HOURS AGO
FOX 23 Tulsa KOKI

PADUCAH, Ky. — A 43-year-old caretaker is accused of stealing pain medication from a Kentucky patient, authorities said. Megan Hutcheson, of Paducah, was arrested Friday and charged with theft of a controlled substance, according to McCracken County Sheriff’s Office online booking records. According to the sheriff’s office, deputies received a...
KENTUCKY STATE・14 HOURS AGO
FOX 23 Tulsa KOKI

HOLBROOK, N.Y. — (AP) — Mourners began arriving at a Long Island funeral home viewing on Sunday for Gabby Petito, whose death on a cross-country trip has sparked a manhunt for her boyfriend. A line had formed outside the funeral home in Holbrook, about 35 miles (56 kilometers) east of...
HOLBROOK, NY・14 HOURS AGO
FOX 23 Tulsa KOKI

PALO ALTO, Calif. — A 30-year-old woman has been arrested on suspicion of sparking the Fawn Fire in northern California that has scorched nearly 9,000 acres across Shasta County since Wednesday. Alexandra Souverneva, 30, of Palo Alto was arrested Wednesday after the fire ignited in the Mountain Gate area near...
CALIFORNIA STATE・11 HOURS AGO
FOX 23 Tulsa KOKI

ANCHORAGE, Alaska — An Alaska man has created what he believes will be a deterrent to bicycle thefts from his property. Nick Stewart said he was tired of bicycles stolen from his Anchorage home, so he has invented a way to “get back” at thieves without stretching the boundaries of the law.
13 HOURS AGO

Wisconsin 1st-grader out of coma after lawnmower accident

A Wisconsin first-grader who was hit in the head by a rock propelled by a lawnmower at his school has emerged from a coma and is eating, family members said. Alex Hook, 6, was in a medically induced coma after he was hit Sept. 10 while at recess at Riverview Elementary School in Silver Lake, the La Crosse Tribune reported.
WISCONSIN STATE・10 HOURS AGO
FOX 23 Tulsa KOKI

JOPLIN, Mont. — (AP) — Federal investigators are seeking the cause of an Amtrak train derailment near a switch on tracks in the middle of vast farmland in far northern Montana that killed three people and left seven hospitalized over the weekend. The westbound Empire Builder was traveling from Chicago...
MONTANA STATE・2 HOURS AGO
FOX 23 Tulsa KOKI

JOPLIN, Mont. — (AP) — A team of investigators from the National Transportation Safety Board was at the site of an Amtrak derailment in north-central Montana that killed three people and left seven hospitalized Sunday, officials said. The westbound Empire Builder was en route to Seattle from Chicago when it...
MONTANA STATE・13 HOURS AGO