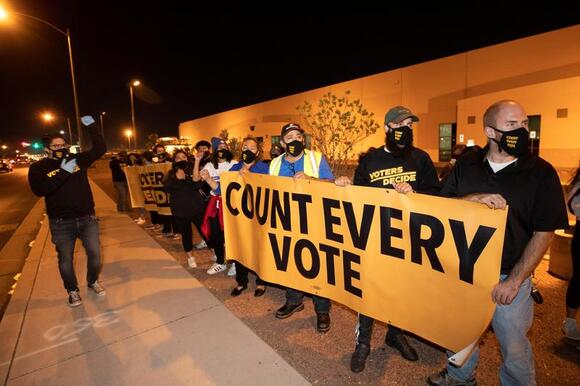 (Reuters) - Facebook Inc removed on Thursday a fast-growing group in which supporters of U.S. President Donald Trump posted violent rhetoric, as it and other companies tackled baseless claims and potential violence after a contentious election.

The “Stop the Steal” group, which called for “boots on the ground to protect the integrity of the vote,” was adding 1,000 new members every 10 seconds and had grown to 365,000 members in a day.

“The group was organized around the delegitimization of the election process, and we saw worrying calls for violence from some members,” a Facebook spokeswoman said.

Group backers said they were organizing peaceful protests, had been working hard to police the comments and that Facebook had given no warning. Chris Barron, a spokesman for the group, said political opponents were also organizing protests but were not banned.

“If Facebook wants to become the arbiter of truth then they’ve got a lot of work to do,” Barron said.

Facebook said the group’s removal was in line with “exceptional measures” amid “heightened tension.”

Measures Facebook introduced on Thursday include warning users results are not final as well as limiting how many people are shown live video about the election, or posts that the company’s algorithms believe contain political misinformation.

For months, Trump and Republican allies have been laying the groundwork to cast doubt on the integrity of the vote in case the president lost his re-election bid.

As tallies increasingly improve the odds for Trump’s Democratic challenger, Joe Biden, and as U.S. broadcasters and other major media outlets brush off Trump’s claims of victory, the president and his supporters have taken to social media to try to turn the narrative around, floating conspiratorial theories using the hashtag #StopTheSteal.

But social media companies have been signaling less patience with disinformation and calls for violence. Eleven of the president’s 32 tweets since Election Day on Tuesday have been placed behind a warning label saying they were disputed, prompting him to use email and other media to voice his claims, researchers said.

On Thursday, Snap Inc’s Snapchat removed a video from Trump’s account in which Biden said he has an extensive “voter fraud organization.” Biden’s statement came during an interview in which he was discussing his team fighting voter suppression efforts, and Snap determined that Trump’s use out of context violated its policy against undermining the integrity of civic processes.

Twitter on Thursday suspended an account used by former Trump campaign manager Steve Bannon after he recorded a video in which he called for beheading FBI Director Christopher Wray as well as government infectious diseases expert Anthony Fauci for being disloyal to Trump.

But the takedowns and warnings are something Trump supporters appear prepared for. Before Facebook deleted “Stop the Steal,” organizers directed members to an email sign-up page “in the event that social media censors this group.”

The group’s membership surged because seven prominent conservatives promoted it to their hundreds of thousands of followers, according to Renee DiResta, a researcher involved in the anti-misinformation Election Integrity Partnership.

While Facebook groups typically work as forums for shared interests, they can harbor hyper-partisan misinformation.

“Facebook has been enabling and amplifying the infrastructure that’s now being used to attack our democratic process,” said Arisha Hatch, executive director of the Color of Change political action committee, one of the country’s largest online racial justice groups.

A review of a small number of comments posted to “Stop the Steal” before its deletion found no direct calls for violence, but its organizing premise - that Republican votes are being “nullified” by Democrats - has no basis in fact.

Facebook, which normally recommends groups to users that they may want to join, last week suspended these recommendations for political groups and new groups around the election.

The “Stop the Steal” group was run by the Trump action group Women for America First. The non-profit organized protests against COVID-19 restrictions and supported Trump during his impeachment hearing.

MEXICO CITY — Mexican President Andrés Manuel López Obrador on Monday urged U.S. Latinos not to vote in November’s midterm elections for politicians who have “mistreated” them, in response to a comment by former U.S. President Donald Trump. Trump boasted at a rally in...
PRESIDENTIAL ELECTION・22 DAYS AGO
Fortune

Sign up for the Fortune Features email list so you don’t miss our biggest features, exclusive interviews, and investigations. Reports that Twitter’s board could come to a deal with Elon Musk as early as Monday are raising red flags among media watchdog groups. On Monday, Media Matters, a...
PRESIDENTIAL ELECTION・23 DAYS AGO
Newsweek

Vladimir Putin's hand appears to tremble before he greets another man, which has sparked further concern over the Russian leader's health.
WORLD・24 DAYS AGO
Newsweek

Former Russian air defense commander Mikhail Kodaryonok sparked a strong response to his comments that "the entire world is against us."
POLITICS・2 DAYS AGO

Fox News host Lisa Kennedy said on Monday that U.S. lawmakers "should not have the government involved in education at all," suggesting that America should rid itself of the public school system entirely. Kennedy's remarks came during Monday's segment of "Outnumbered" in which Kennedy was facilitating a discussion around the...
CONGRESS & COURTS・22 DAYS AGO
Business Insider

The Kremlin has refused to acknowledge its death toll in Ukraine, though a spokesperson admitted that Russia suffered "significant losses."
MILITARY・23 DAYS AGO
Fox News

The former adviser to Donald Trump said Putin probably needed glasses and ate and drank nothing at a dinner she attended, where the Russian president "barely gave her a glance."
POTUS・2 DAYS AGO

US officials were caught off guard when President Volodymyr Zelenskyy said Saturday that two top US officials were to visit Kyiv, NBC News reported.
WORLD・24 DAYS AGO
americanmilitarynews.com

The intelligence the U.S. shared with Ukraine helped it continue to resist Russian invading forces and even shoot down a transport plane carrying hundreds of Russian troops, a new report revealed. According to current and former U.S. officials who spoke with NBC News on Tuesday, the U.S. provided critical intelligence...
MILITARY・22 DAYS AGO
Business Insider

The mother has questioned whether the soldiers would let her son live even if she did send the money.
MILITARY・24 DAYS AGO

The FBI also seized financial records and fine art in the October 2021 raids on properties linked to billionaire Oleg Deripaska, per Bloomberg.
WASHINGTON, DC・23 DAYS AGO
US News and World Report

WASHINGTON (Reuters) - The United States on Tuesday offered a reward of up to $10 million for information on six people it described as Russian military intelligence officers who had conducted cyber attacks affecting critical U.S. infrastructure. The six officers work in a cyber-focused unit of Russia's Main Intelligence Directorate...
PUBLIC SAFETY・22 DAYS AGO
The Independent

A legal effort to ban Marjorie Taylor Greene from standing for re-election has been given the go-ahead by a federal judge, who denied the far-right Georgia congresswoman’s attempt to have the case against her thrown out – paving the way for further proceedings by the end of this week.The news led Ms Taylor Greene to complain that “I have to go to court on Friday and actually be questioned about something I’ve never been charged with and something I was completely against.”Ms Greene, a hardline pro-Trump Republican who has long circulated false conspiracy theories, is accused by campaigners of...
CONGRESS & COURTS・29 DAYS AGO
Salon

A plethora of downright bizarre scientific research from the Department of Defense previously kept under wraps has been uncovered, revealing an array of peculiar schemes proposed by the United States military. One outlandish proposal suggested detonating nuclear bombs on the moon to create a tunnel through it. Millions in taxpayer dollars were spent on the research, which appears to have relied on a contractor, Bigelow Aerospace Advanced Studies, which was owned by multi-millionaire Robert Bigelow, a hotel impresario. The public was kept in the dark until now regarding what research was being funded.
ASTRONOMY・22 DAYS AGO

The poster offered a solution for what someone should do should they see someone in the restroom they don't think matches the sign on the door.
RELIGION・23 DAYS AGO
Business Insider

An attorney for the campaign said they thought they were allowed to use the funds based on a "good faith" understanding of the "highly confusing" rules.
FLORIDA STATE・16 HOURS AGO
Business Insider