‘It’ll be higher than Obama’: Mike Espy will benefit from record Black voter turnout in Mississippi 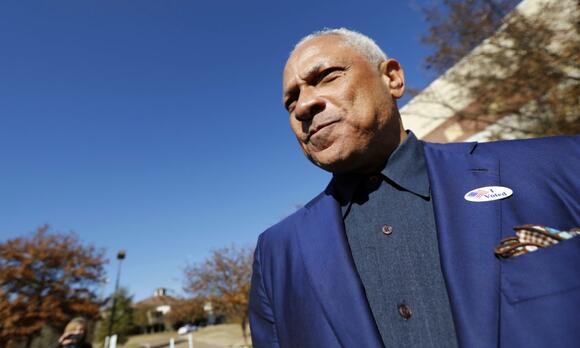 He will get it, according to several of the state’s top Democratic insiders who are working on the ground in the 2020 cycle.

“I’ve looked closely at the data, and I think Black turnout in Mississippi will be higher than it was when we had President Obama on the ballot,” said Charles Taylor, a political data consultant who is managing the canvassing effort for the Mississippi Democratic coordinated campaign this year.

“Black voters have struggled in this country and in this state for a very long time. Any opportunity or chance we get to increase our collective power, we’re going to do everything we can to do so,” Taylor continued. “Trump is the most divisive president and the worst president to people of color that we’ve had in modern history, and you’ve got a chance to help get him out of the White House. And you’ve got Espy at the top of the Mississippi ticket. There’s organic excitement that I haven’t seen in Mississippi in a long time.”

Black Mississippians make up about 37% of the state’s voting-age population and are the most critical voting bloc for Espy this year as he seeks to become the state’s first Black senator elected by popular vote. No African American has won a statewide election in the state’s history.

Espy — who was the first African American elected to Congress since Reconstruction and has made race a central theme of his 2020 campaign — maintains that he will win if, among other things, Black voters make up at least 35.5% of the total electorate.

The highest share of Black voters in the state’s modern history was 2012, when they made up 36% of the electorate. That was the year President Barack Obama was running for re-election. The record voter turnout in 2020, projected by the political insiders, would likely surpass that mark and exceed Espy’s target.

This year, Obama’s former vice president Joe Biden — popular with Black Mississippi voters — is at the top of the ticket running against Trump, along with running mate Sen. Kamala Harris, who would be the nation’s first Black vice president.

Not every Black Mississippian who votes next week will check the box next to Espy’s name, but it’ll be close.

In the 2018 runoff for U.S. Senate, Espy received 95% of the African American vote, which made up about 32.5% of the total electorate. Top-of-ticket Democratic candidates in recent Mississippi elections have received from 88% to 95% of the Black vote, depending on the candidate.

Dating back to 2008, Black Mississippi voters have made up 30% to 36% of the overall turnout, based on exit polls and commercial voter files, according to Chism Strategies, a Mississippi-based political consulting firm. The low mark was 30% in 2014, and the high mark was 36% in 2012.

Voter turnout during the COVID-19 pandemic remains uncharted and unknown, but Mississippi continues adding to its record pace with absentee ballots, which are typically an indicator of in-person turnout. As of Tuesday, more than 190,000 absentee ballots had been requested, compared to less than 111,000 requested in the entire 2016 election.

Though racial disparities have lessened during the pandemic as cases have surged in white, rural pockets across the country, Black Mississippians are still disproportionately diagnosed with and killed by the coronavirus. Several advocates have expressed concern that maskless voters might deter Black voters concerned about spread, or worse, cause voters to risk contracting the coronavirus simply by exercising their right to vote.

Several have suggested that Mississippi’s Republican leaders choosing not to expand early voting options during the pandemic, letting a statewide mask mandate expire even as COVID-19 cases spike, and not requiring masks to be worn at polling places are examples of voter suppression.

“It is voter suppression, but it’s also dumb,” said Congressman Bennie Thompson, Mississippi’s lone African American elected official in Washington who last week predicted “tremendous” Black voter turnout this year. “… Why would you risk your life just to vote, unless you felt that all precautions were being met? A simple precaution like a mask could be the encouragement necessary for a person to go and vote.”

But some politicos say any perceived effort by Republicans to suppress the vote by not expanding safe voting options during the pandemic may backfire.

“I have been pleasantly surprised over the last 30 days at the energy I am seeing and hearing in the Black community,” Shaw said. “… I think you’re going to have in terms of the Black community almost the turnout you had with Obama. Maybe not quite, but close. It’s a combination of Kamala (Harris), and the pandemic and just the energy, a combination of all those things.”

Shaw said she’s seeing and hearing about many older Black voters voting absentee and, “I think people are trying to do work-arounds with the virus.”

White Mississippians have driven recent COVID-19 case growth. Over the last two months, white cases have more than twice outpaced growth among Black Mississippians. But within that breakdown, Black women in particular have borne the brunt of the virus in Mississippi, accounting for nearly 30% of all cases where race is known, but only 20% of the population.

The irony is not lost on advocates that these are the very women who have driven the Democratic vote and voter rights campaigns for decades.

“People who were deemed essential workers, on the frontlines, who live in multi-generational households … who have been impacted by the virus or know people who have, they lay this on Trump, lay it at his feet,” Shaw said. “I think Black women have in many ways embraced the narrative, ‘We can make a huge difference.’ Lots of Black women’s organizations, formal and informal networks, are saying, ‘Wait a minute, I don’t like what’s going on with kids, with schools, with conversations around pandemic unemployment.’”

While anti-Trump sentiments and excitement for Espy are evident among Black voters, operatives also point to political strategy as a reason to expect record turnout.

Espy this year has raised more than $9 million — by far the highest amount raised by a Democrat in the state’s history — and he has strategically targeted Black voters with television, radio and digital advertising and in-person outreach the past few weeks. A robust Democratic field strategy has placed paid canvassers in 52 counties since September, and many of them have been focused exclusively on reaching Black voters.

“The investment Espy’s made specifically to Black voters, I think he’s going to see a return on it,” Taylor said. “He put his money where his mouth was. This is the first time we’ve really seen people trying to turn out Black voters in this state in a presidential election cycle.

Taylor continued: “Win, lose or draw, whether there’s immediate satisfaction with the numbers on Tuesday or not, Espy’s campaigns in 2018 and in 2020 will leave a legacy and real infrastructure in Mississippi politics. His candidacy has helped to modernize the Democratic Party in Mississippi.”

Read this on the web
View All 11 Comments

Gov. Tate Reeves is adamant that he will not call a special session to enact medical marijuana and to fix the ballot initiative process until legislative leadership reaches a consensus on how to deal with the separate but related issues. In May, the Mississippi Supreme Court struck down medical marijuana,...

Podcast: Mother of patient discusses what’s next for medical marijuana in Mississippi

Angie Calhoun of Puckett became an advocate for medical marijuana after her teenage son suffered a debilitating illness and standard pharmaceutical treatments didn’t work — and brought horrible side effects. Calhoun is now chairwoman of the Mississippi Medical Marijuana Association. Like many others, she is waiting to see whether state...

CARRIERE — It takes $80 to fill the gas tank inside the beat-up white cargo van 34-year-old Michael Beard calls home. He can’t afford that, so he usually fills it in $20 increments. He spends no more than $5.40 on food each day. The shower and washroom at a nearby Pearl River County truck stop are his biggest expense, eating up one of the largest chunks of his weekly unemployment checks after child support. Each shower costs $13.

A group of cybercriminals hacked the Vicksburg Warren School District’s servers last month and claimed to have employees’ personal information and internal school documents. A group that calls itself “Grief” breached the school’s servers through a ransomware attack on May 28. “The network of Warren Vicksburg School was screwed and...

COVID-19 grant program promised to prioritize minority businesses. Did it?

An emergency grant program for small businesses during the worst of the pandemic last year was supposed to give priority to minority and women-owned businesses in Mississippi in giving out grants up to $25,000 each from federal COVID-19 relief passed by Congress. Although the program overall appeared to sputter —...

Poll: Mississippians and politicians at odds over marijuana, Medicaid

A new poll says a majority of Mississippi voters not only want the Legislature to create a medical marijuana program like the one the state Supreme Court nullified, but they favor allowing recreational use of pot. Nathan Shrader, chair of government and politics and director of American studies at Millsaps,...

Supreme Court Justice Michael Randolph used a little-known provision in a 2012 law to quietly — and without legislative approval — award pay raises to himself and all of the state’s judges earlier this year. Randolph wrote a letter last December informing state Personnel Board Executive Director Kelly Hardwick that...

Special election to address ballot initiative can happen this year, but it will cost

If the Mississippi Legislature does set the date for a special election this year to reinstate the ballot initiative process that was invalidated last month by the Supreme Court, it would cost the state or local governments and perhaps both. In a statement to Mississippi Today, a spokesperson for Secretary...

Growing up in Greenwood in the 1980s, Sue Anna Joe was an artsy person. Joe, 45, remembers The Greenwood Little Theater, a non-profit community theater that is run by volunteers. Despite the theater’s presence, the Delta’s remoteness — it was common for people in Greenwood “to drive down to Jackson” — removed Joe from the hum of city life and new adventures.

Mississippi received $1.25 billion in federal Coronavirus Aid, Relief, and Economic Security Act pandemic relief in 2020. Here’s a breakdown of how state lawmakers spent the money, according to the National Conference of State Legislatures. Note: You can read a bulleted list under the graphic. Housing assistance: $20 million for...

Here’s how readers feel about the Supreme Court’s decision to overturn the ballot initiative process.

CARES Act money was supposed to help Mississippi businesses. Did it?

Only half the of Mississippi's CARES Act funding appropriated for small business assistance was used, and business owners reported being tangled in red tape. The post CARES Act money was supposed to help Mississippi businesses. Did it? appeared first on Mississippi Today.

Teachers at New Summit School, whose owner is accused of defrauding the state and federal government, did not receive checks this month. The post New Summit teachers miss paychecks for first time since owner was accused of fraud appeared first on Mississippi Today.

Lt. Gov. Hosemann appoints newspaper publisher to Board of Education

Bill Jacobs of Brookhaven will serve a three-year term ending in July 2024 pending confirmation by the Mississippi Senate. The post Lt. Gov. Hosemann appoints newspaper publisher to Board of Education appeared first on Mississippi Today.

Instances of appointees serving on taxpayer-funded boards and commissions prior to Senate confirmation occur regularly. The post Process for filling board vacancies is gray area or black hole for state government appeared first on Mississippi Today.