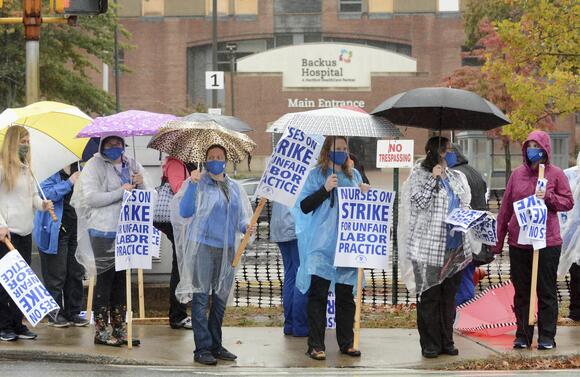 Eight more communities, many in southeastern Connecticut, were identified Thursday by state public health authorities as “red alert towns” after their daily rates of new COVID-19 infections surpassed 15 per 100,000 people since last week.

There are now 19 cities and towns on the weekly list that now have the option of rolling back the state’s third phase of reopening. Residents there are also being urged to wear masks, socially distance, frequently wash their hands, stay home if they’re over 65, cancel gatherings and events with nonrelatives, and get tested regularly, even if they’re healthy.

While concerned with these localized spikes, Democratic Gov. Ned Lamont said there are signs of improvement since state and local health officials began ramping up testing and contact tracing in the region several weeks ago.

“So when we bring in the rapid response, over a period of time, I think we are able to get this contained,” Lamont said.

Both communities, however, still have the highest rates in the state.

Two other southeastern Connecticut communities, East Lyme and Preston, were removed from the list, while Groton, Lisbon, Waterford, Plainfield and Salem were added. In other parts of the state, East Hartford, Norwalk, Fairfield, Prospect and Waterbury were identified as red alert communities.

Besides Norwich and New London, Sprague, Windham, Canterbury, Griswold and Montville in eastern Connecticut remained on the list, as well as Hartford and Danbury.

As of Thursday, the statewide positive rate was 2.3%, with 232 people in the hospital, an increase of 19 since Wednesday. Lamont noted that is far fewer than during the height of the pandemic in Connecticut, when there were about 2,000 hospitalizations.

Besides having more hospital capacity now, Lamont noted, patients are spending less time in the hospital and are less likely to be admitted to the intensive care unit.

Josh Geballe, Lamont’s chief operating officer, said a quarter of Connecticut’s hospital beds are unused right now, without taking steps such as canceling elective procedures. Also about half of the state’s roughly 1,000 ICU beds are being used.

There have been 4,569 COVID-related deaths in Connecticut, an increase of two since Wednesday.

In other coronavirus-related news in Connecticut:

Given that Hartford is a “red zone” community, with more than 15 cases per 100,000 people, Lamont said that reluctantly he will not be giving out candy on Halloween to trick-or-treaters from the executive residence, which is in the capital city.

It has been a longstanding tradition for governors to hand out candy, often full-size chocolate bars from Connecticut-based Munson’s Chocolates, to long lines of eager children in costumes.

“This year, for the first year, we’re not going to be able to do Halloween,” said Lamont. “We are in Hartford and it is in a red zone. We do attract a crowd. And I say that with great disappointment.”

Registered nurses at the William W. Backus Hospital in Norwich have approved a new, four-year collective bargaining contract after going on a two-day strike amid disputes over pay and the availability of protective gear during the coronavirus pandemic.

The union representing more than 400 nurses voted nearly unanimously on Wednesday to approve the settlement with the hospital, which is located in a city that has been experiencing a spike in COVID-19 cases.

The agreement was reached Saturday between the union and Hartford Healthcare, operator of the 213-bed hospital, after an intervention by Lamont, who had voiced concern about nurses striking when positive cases have been increasing in southeastern Connecticut.

“The overwhelming support in favor of this agreement proves what we’ve all seen throughout this pandemic: nurses united can never be divided,” said Backus Federation of Nurses President Sherri Dayton in a written statement.

AFT Connecticut, which represents the nurses, said the labor agreement improves protective gear policies, “empowers the caregivers to address staffing issues” and resolves long-standing recruitment and retention concerns by making “significant economic investments” in the workforce. The nurses have complained about high turnover and low pay in relation to surrounding hospitals.

Hospital workers in West Virginia to vote on contract offer

PROVIDENCE, R.I. (AP) — The Providence Firefighters Union and the city have reached a tentative agreement on a new five-year contract that includes 4% annual pay raises, but also increases union members’ pension and medical contributions. The deal, that runs from July 1, 2022, to June 30, 2027, has yet...
PROVIDENCE, RI・1 HOUR AGO