THEN AND NOW: The cast of 'Hocus Pocus' 28 years later 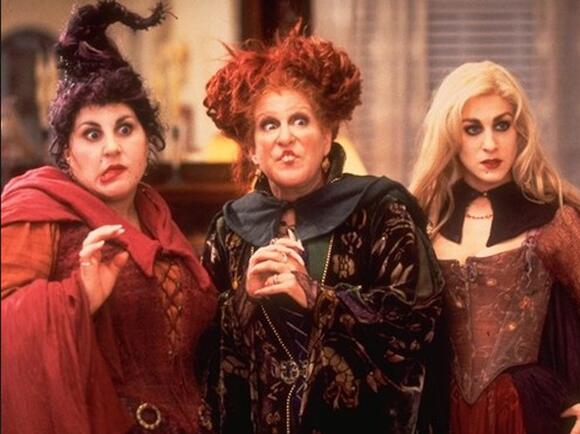 When "Hocus Pocus" first hit theaters in 1993, it was neither a commercial nor critical success.

The film follows the Sanderson sisters, a trio of evil witches who are accidentally resurrected on Halloween night in Salem, Massachusetts, and the rag-tag group who tries to finish them off once and for all.

In the years since, " Hocus Pocus " has become a Halloween cult classic, so much so that Bette Midler, Kathy Najimy, and Sarah Jessica Parker have all signed on for a sequel on Disney Plus , which will be released in fall 2022.

Here's what the original cast of " Hocus Pocus " is up to now.

Midler put her singing skills to use when her character performed a version of "I Put A Spell On You" with spooky lyrics such as "It's been 300 years, right down to the day / Now the witch is back and there's hell to pay."

Midler is still riding high as an award-winning actress, singer, author, and comedian.

She has recently starred in "Hello, Dolly!" on Broadway (for which she won her second Tony), "The Politician" on Netflix, and the Gloria Steinem biopic "The Glorias."

She'll start filming for "Hocus Pocus 2" with her fellow stars this fall. They were all immediately onboard when they saw the plot, she said.

"They presented us with an outline, and after we picked ourselves up off the floor, because it's been 27 years, we looked at it and I think all of us agreed that it was pretty great," she told People in October 2020.

Sarah Sanderson isn't the brightest of the bunch, but she manages to lure all of the children in Salem to their house by singing a hypnotizing song called "Come Little Children."

Parker went on to star in "Sex and the City" and its subsequent film adaptations and founded her own production company in 2005.

Parker's role in the HBO show "Divorce" earned her a Golden Globe nomination .

She is currently filming " And Just Like That... ," a revival of " Sex and the City " that will come out in December, before starting on "Hocus Pocus 2."

Kathy Najimy played Mary Sanderson, the Sanderson sister with a talent for sniffing out children.

Najimy has since appeared in a wide array of movies and TV shows, including "Rat Race," "The Guilt Trip," "BoJack Horseman," and "Crazy Ex-Girlfriend."

She has most recently starred in " Veep " and " The Rocketeer " and appeared in " Robot Chicken ," " Rise of the Teenage Mutant Ninja Turtles ," " Duncanville ," and " American Dad !"

She also shared a teaser photo for "Hocus Pocus 2" in May, writing: "The people have spoken: I smell children...again."

In the film, Dennison lights the cursed Black Flame Candle on Halloween night that brings the Sanderson sisters back from the dead.

Before the movie, he'd also appeared in shows including " Eerie, Indiana " and "Dallas."

Katz retired from acting and works as a hairstylist in Los Angeles.

Even though he left Hollywood behind, he still made an appearance for a Freeform special in honor of the 25th anniversary of " Hocus Pocus " in 2018.

He's also kept in touch with some of his costars, celebrating Halloween with two of them in 2015.

Birch has continued to act, most recently appearing in "The Walking Dead."

More recently, Birch has appeared in movies such as " Above Suspicion ," " Kindred Spirits ," " The Last Black Man in San Francisco ," and " Affairs of State ."

The character of Allison was played by Vinessa Shaw.

Allison's mother used to run the museum built in the Sanderson sisters' old cottage in Salem. She brings Max and Dani there, where Max lights the Black Flame Candle and resurrects the fearsome witches.

Shaw has continued acting, appearing in movies including "Eyes Wide Shut," "40 Days and 40 Nights," and "The Hills Have Eyes."

She most recently starred in 2021's " 12 Mighty Orphans " and " We Need to Do Something ," which she also co-executive produced.

She told Entertainment Tonight in October 2021 that she hasn't been asked to be involved in the " Hocus Pocus " sequel.

"I haven't heard anything," she said. "I know, it's so disappointing. I would love to do the sequel. It would be so much fun. I think there's just a different storyline with younger people, but why can't we all come back in some way?"

Jenny dresses up as Madonna for a Halloween party.

Faracy also continues to act and recently appeared in the TV shows "Sneaky Pete," "How to Get Away with Murder," and "Devious Maids."

In the end, Butcherson helps Max, Dani, and Allison defeat the Sanderson sisters and returns to his grave to sleep in peace. Jones used his training as a mime and contortionist to make the zombie-like character more humorous than horrifying .

Jones still works in acting, often playing aliens or other non-human species with the help of makeup and special effects.

Jones has appeared in films like " Hellboy ," " Crimson Peak ," and " The Shape of Water ," but he wrote on Twitter that "Playing Billy in HOCUS POCUS was a highlight in my life and career."

Start making those salt circles, folks: Much to Thackery Binx's dismay, the Sanderson Sisters will soon return to Salem — and this time, we won't have to wait for a virgin to light the Blake Flame Candle. Earlier this year, we learned the glorious news that Hocus Pocus 2 will...
MOVIES・14 DAYS AGO
NBC San Diego

Bette Midler and her "Hocus Pocus" co-stars are back in their witchy wardrobes and ready to run amok, amok, amok in the beloved movie's long awaited sequel. The Hollywood legend, 75, tweeted a photo of her and castmates Sarah Jessica Parker, 56, and Kathy Najimy, 64, all dressed up as the Sanderson sisters on Friday — and let's just say the snap, which comes nearly 30 years after the original movie debuted, had fans under their spell.
MOVIES・14 DAYS AGO
HollywoodLife

‘Hocus Pocus 2’ is just a year away! Bette Midler, Sarah Jessica Parker, and Kathy Najimy are officially confirmed to return, but they’ll be joined by brand-new cast members. Here are all the latest updates. The Sanderson sisters will live to witch another day, but they’ll have some new characters...
MOVIES・26 DAYS AGO
rachaelrayshow.com

Each product has been independently selected by our editorial team. We may receive commissions from some links to products on this page. Promotions are subject to availability and retailer terms. Tony Hale on the Surreal Experience of Filming Being the Ricardos + Joining Hocus Pocus 2 Cast. Tony Hale, who...
MOVIES・12 DAYS AGO

See the Sanderson Sisters Back on Set for Hocus Pocus 2

Bette Midler posted a photo on social media of the three in character as Mary, Winifred, and Sarah. All three donning their original costumes while filming in Newport, Rhode Island. Not much has been released about the sequel at this time, though it will pick up 29 years after the original movie ended. It’s set to be released in the fall of next year.
MOVIES・12 DAYS AGO
vermilioncountyfirst.com

SATC TEASER DROPS: “And just like that, a new chapter begins,” says Sarah Jessica Parker‘s Carrie in the new HBO Max teaser for its Sex and the City revival And Just Like That… The film stars SJP, Cynthia Nixon and Kristin Davis in a revival that will explore the complications of life and friendship in their 50s. Chris Noth, David Eigenberg, Evan Handler, Mario Cantone and the late Willie Garson are also returning, though not Kim Cattrall. The show will bow December 9th.
MOVIES・13 DAYS AGO
thrillgeek.com

They’re back! We got our first official look at Bette Midler, Sarah Jessica Parker and Kathy Najimy back as the Sanderson sisters in the upcoming sequel to the 1993 hit film Hocus Pocus. Not much is known about the plot of Hocus Pocus 2 other than that it’ll see three...
MOVIES・14 DAYS AGO
12tomatoes.com

People around the world enjoyed celebrating Halloween in 2021. It seems as if that is going to pale in comparison to 2022, however, if Disney has anything to say about it. Disney waited until the day after Halloween to announce that Hocus Pocus 2 is in production. By the time next fall rolls around, it will be debuting on their Disney+ streaming service. In their words, it is “truly exciting news” for fans.
PROVIDENCE, RI・11 DAYS AGO

Hocus Pocus fans got wicked lucky Friday when Disney+ released a glimpse at Sarah Jessica Parker, Bette Midler and Kathy Najimy back in character as the Sanderson sisters. As part of this year's Disney+ Day, the streamer shared a first look photo at Hocus Pocus 2, the highly anticipated sequel to the original 1993 film.
MOVIES・12 DAYS AGO
Valley Breeze

SMITHFIELD – DM Roy said he never imagined he’d be rubbing elbows with celebrities during his days working retail, but after a disability put him out of work, he took a leap of faith to begin working as an extra on big movie sets. His latest big production: “Hocus Pocus...
SMITHFIELD, RI・9 DAYS AGO
Turnto10.com

NEWPORT, R.I. (WJAR) — Locals and tourists braved the cold weather Tuesday night in Newport, as "Hocus Pocus 2" filmed downtown. Dozens of people stood outside, excited to get a glimpse of the film's celebrities in action. Carolyn Amarant, 9, and her sister Alexa, 7, were excited to watch the...
NEWPORT, RI・11 DAYS AGO
TODAY.com

The Sanderson sisters are back and better than ever!. Sarah Jessica Parker, who played Sarah Sanderson in the 1993 Disney movie “Hocus Pocus,” shared a behind-the-scenes glimpse into the filming of the film’s sequel, “Hocus Pocus 2.”. In a photo shared on Instagram, Parker snapped a photo of three boot...
MOVIES・13 DAYS AGO

It's official — the Sanderson sisters have finally reunited on the set of Hocus Pocus 2! Stars Bette Midler, Sarah Jessica Parker, and Kathy Najimy were spotted filming in Newport, Rhode Island on Nov. 16, all dressed up in their witchy attire and donning their signature hairstyles ready to wreak havoc once again.
THEATER & DANCE・10 DAYS AGO
themainstreetmouse.com

See Some of your Hocus Pocus Favorites in Person!

The film “Hocus Pocus” is a classic that has stood the test of time since it’s debut in 1993. For me, it’s an absolute favorite and my go to movie each Halloween season. Some have watched this movie so much that we almost feel like we know the characters! Well, how would you like to see some of your faves in person? The House of Mouse Expo THIS WEEKEND is bringing you four beloved characters from Hocus Pocus, to meet in person plus do a panel about the movie! Exciting isn’t it? Here’s the breakdown!
MOVIES・4 DAYS AGO
People

The Cast of My Girl: Where Are They Now?

It's been 30 years since the coming of age film was released, launching Anna Chlumsky and Macaulay Culkin to stardom. See what the cast of the beloved movie is up to now. Then: Chlumsky was just 10 when she starred in My Girl, playing angsty tween Vada Sultenfuss. After starring in the 1994 sequel and a few other films, she took a break from acting to attend the University of Chicago and work in publishing.
MOVIES・16 HOURS AGO
Hello Magazine

Willow Smith kicked off her 21st birthday with an epic Halloween party in a costume that made fans lose it. The Whip My Hair crooner looked beyond stunning as she transformed into Brad Pitt’s Fight Club character Tyler Durden for the fete, giving the look a high-fashion twist we won’t soon forget.
BEAUTY & FASHION・26 DAYS AGO

Actor and producer Heath Freeman, known for his roles in "NCIS" and "Bones," has died at the age of 41, his manager announced Tuesday.
CELEBRITIES・11 DAYS AGO
Closer Weekly

Since his rise to fame on The Andy Griffith Show, Ron Howard has gone on to dominate Hollywood with some of the biggest blockbuster films. The director and actor got his start in show business when he was just 5 years old. His net worth after over 60 years in the entertainment industry will blow your mind.
CELEBRITIES・12 DAYS AGO