Garth Brooks and Trisha Yearwood Have Lived in Nashville for Years! Take a Tour of Their Home 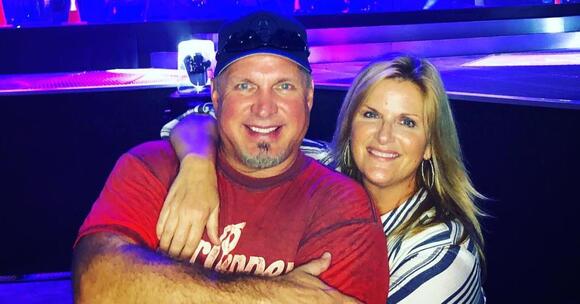 Garth Brooks and Trisha Yearwood live on the right side of Memphis! The “Friends in Low Places” crooner and his country music star spouse have lived in their beloved Nashville home for a long time now.

Garth first purchased the home in Goodlettsville, TN, which is just 15 miles outside of Music City, in November 1990. According to reports, he paid $432,500 for the 5,551-square-foot property that sits on a massive 19.8-acre lot. Trisha then moved in after the two tied the knot in 2005.

Thanks to their combined net worth of over $400 million, the “Thunder Rolls” singer and the Trisha’s Southern Kitchen star live in a magnificent mansion that features seven bedrooms and six bathrooms. The home — which the couple nicknamed the “Blue Rose Estate” — also boasts multiple living areas, dining rooms and a finished basement.

On top of their enormous space, Garth and Trisha’s home offers tons of lavish amenities. The gorgeous house is fitted with a long driveway that ensures total privacy, a luxurious pool and spa, a 1,575-square-foot garage and more.

Before moving full-time to Nashville around 2014, Garth and Trisha previously owned an abode in Malibu, California. According to Variety, the CMA Award winner and the “She’s in Love With the Boy” songstress sold the ranch-style residence in 2014 for $7 million.

Garth and Trisha were also the owners of a second estate in Oklahoma. The couple purchased the home back in the day so the hunk could be close to his three daughters, Taylor Brooks, August Brooks and Allie Brooks, after their mom and Garth’s ex-wife, Sandy Mahl, moved to the area.

Velvet Ropes reported the doting dad, who was married to Sandy from 1986 to 2001, promised Trisha they would return to Nashville once his girls graduated from high school. Garth and the “Every Girl in This Town” singer enjoyed life in their seven-bedroom, nine-bedroom home, but the “Dance” singer kept true to his word when they sold the place for $3.5 million in 2014, according to Distractify.

Now that Trisha and Garth are back in Nashville for good, the two couldn’t be more excited to enjoy their life at home together. “I’m madly in love with him,” the Home Cooking With Trisha Yearwood author exclusively gushed to Closer in 2019. “We were such good friends for such a long time [before we married], so I think at the end of the day, it’s the friendship and the respect that sustains you.”

Scroll through the gallery below to see photos inside the couple’s Nashville home!

Miranda Lambert will be celebrating her birthday once again at the CMA Awards as the 2021 broadcast falls on November 10th, Miranda’s 38th birthday. It’s not the first time Lambert has gotten a CMA Award on her birthday. She told us, “The CMA Awards have always been one of my favorite things about each November it usually falls on my birthday. And a lot of times I’ve gotten to take home a really cool birthday present in form of a CMA award.”
CELEBRITIES・28 DAYS AGO
Outsider.com

Randy Travis ‘Thanks God’ for Having Garth Brooks as a Friend

Modern country music pioneers Randy Travis and Garth Brooks have formed quite a friendship over the years. They respect and love each other as both artists and people. So when Travis was awarded the 2021 CMT Artists of the Year award, Garth Brooks was the perfect person to present the trophy.
MUSIC・22 HOURS AGO
Houston Chronicle

Nearly two years into the pandemic, unpredictability continues to rule our cooking lives. Whether it was trying to find basic necessities when COVID-19 first took hold, to hoarding beans and canned soup, to become yeast-scavenging bread pioneers, we rode the waves of make-do meal planning and quarantine cooking. We lived through food shortages and wild price fluctuations for staples and soldiered through last year’s socially distanced holidays with healthy servings of uncertainty.
RECIPES・1 DAY AGO

Apparently, Trisha Yearwood has been spending some time listening to the music of Luke Combs. She recently shared her love for one of his songs on Twitter. Trisha took to her Twitter last night (10/5) to post, “Cold As You… @lukecombs Wow. That is all.”. Many of Trisha’s following agreed...
MUSIC・14 DAYS AGO
KIX 105.7

Garth Brooks has achieved many career milestones and accolades, but perhaps none will be as significant as what happened on Oct. 6, 1990. It was on that date, 31 years ago today, that the Oklahoma native fulfilled a lifelong dream when he became a member of the Grand Ole Opry.
CELEBRITIES・14 DAYS AGO
Register Citizen

Reba McEntire has a Broadway idea for fellow country star Trisha Yearwood — and it involves murder. During a recent virtual 92Y talk, Yearwood, who has a new cookbook out called “Trisha’s Kitchen,” recently revealed she has dreams of the Great White Way. “When I go to a Broadway show,...
CELEBRITIES・12 DAYS AGO
kfdi.com

CMT announces presenters for 2021 “Artists of the Year” event including Eric Church, Garth Brooks and more

CMT has revealed its presenters for the 2021 “CMT Artists of the Year” celebration, airing LIVE from Nashville’s Schermerhorn Symphony Center on Wednesday, October 13th at 9p/8c on CMT. Garth Brooks will honor friend and country legend Randy Travis with the “Artist of a Lifetime” award. Connie Britton, Eric Church,...
NASHVILLE, TN・7 DAYS AGO
Popculture

Garth Brooks will honor friend and country legend Randy Travis at the CMT Artist of the Year celebration airing on Wednesday, CMT confirmed. During the ceremony, Brooks will present Travis with the highly-coveted Artist of a Lifetime award, which honors artists who have made massive impacts on country music. Travis will become the sixth legend to receive the CMT Artist of a Lifetime award, joining the ranks of Merle Haggard, Kenny Rogers, Shania Twain, Loretta Lynn, and Reba McEntire.
CELEBRITIES・7 DAYS AGO
Outsider.com

Garth Brooks on Being Back on Stage for Dive Bar Tour: ‘There’s No Place Like Home’

Garth Brooks might be one of Country music’s biggest names, but that doesn’t stop him from staying true to his roots. Sure, the guy’s got a massive amount of talent stored in that body, but he would no doubt say his fans helped him get to where he’s at today. He recognizes that and although he has the capacity to sell out arenas, Garth started missing his more intimate shows over time.
MUSIC・8 DAYS AGO

Last night’s (10/13) COUNTRY RADIO HALL OF FAME induction ceremony started out with a pair of superstar surprises. First, GARTH BROOKS showed up unannounced to help present KEITH URBAN with the COUNTRY RADIO BROADCASTERS (CRB) Artist Career Achievement Award. BROOKS spoke briefly before performing an acoustic version of URBAN’s “You’ll Think Of Me.” He and URBAN then took the stage together to sing NITTY GRITTY DIRT BAND’s “Fishin’ In The Dark,” only to be joined halfway through by TRISHA YEARWOOD, who made it a trio.
MUSIC・5 DAYS AGO
GMA

Garth Brooks is heading to the Mother Church of Country Music for two nights next month.
MUSIC・1 DAY AGO
iHeartRadio

Garth Brooks Teases There May Be A Las Vegas Residency On The Horizon
LAS VEGAS, NV・1 DAY AGO
WATN Local Memphis

NASHVILLE, Tenn. — After cancelling five shows in August due to COVID-19 surges, Garth Brooks announced Tuesday, Just Garth, The Ryman and You, two back-to-back shows at Nashville’s historic Ryman Auditorium. All tickets are $250, all fees included, and go on sale Friday, October 22 at 10 a.m. at Ticketmaster.com/GarthBrooks....
NASHVILLE, TN・1 DAY AGO

The pandemic crushed Garth Brooks’ stadium tour this fall, but the top-selling solo artist of all time quickly made other plans. And the future looks like a residency. Tuesday Brooks revealed “Garth, The Ryman & You,” an intimate evening at Nashville’s Ryman Auditorium, set for 7 p.m. Nov. 19 – 20.
MUSIC・1 DAY AGO
antiMUSIC

Garth Brooks has announced that he will be getting intimate with fans with two special back to back concerts at the historic Ryman Auditorium in Nashville next month. The shows billed as "Just Garth, The Ryman and You" are said to give fans an intimate setting to hear Garth perform and share the stories behind the songs his career.
MUSIC・1 DAY AGO
Chicago Sun-Times

Charley Pride will be posthumously honored with the RIAA Lifetime Achievement Award on October 25th at the National Museum of African American Music in Nashville. The award will be presented by Garth Brooks to Charley's son, Dion. RIAA Chairman & CEO, Mitch Glazier and COO Michele Ballantyne will be presenting a plaque to both Charlie’s family and to the Museum for their walls.
NASHVILLE, TN・21 HOURS AGO