Trump hired an Obama impersonator to yell at and "fire," according to Michael Cohen's book 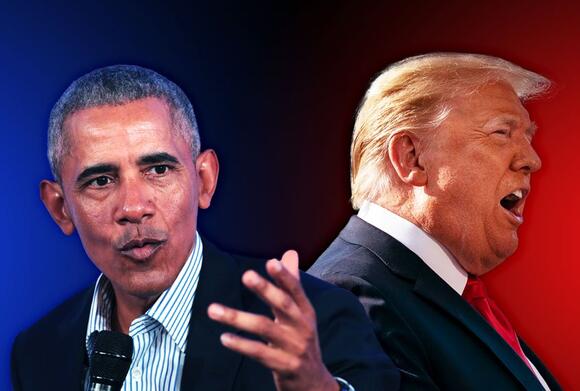 On Saturday evening, The Washington Post revealed details from Cohen's tell-all book after obtaining a copy. CNN also obtained a copy and reported on the portions discussing Trump's fixation with President Barack Obama.

"Before Donald Trump ever sought the Oval Office, he was preoccupied by its occupant President Barack Obama, publicly questioning his birthplace and privately describing him as 'a Manchurian candidate' who obtained his Ivy League degrees only by way of affirmative action, according to a new book by Trump's former attorney, Michael Cohen," CNN reported.

CNN added a shocking detail, "Trump's disdain for Obama was so extreme that he took his fixation a step further, according to Cohen: Trump hired a 'Faux-Bama' to participate in a video in which Trump 'ritualistically belittled the first black president and then fired him.'"

Cohen included a photo of the Obama impersonator in his book.

wow and another deceptive, delusional fantasy spun by a very reliable Lawyer whos where? IN FEDERAL PRISON you guys are worse than a 60's spaghetti western!

"These are my people": The 5 most shocking revelations from Woodward and Costa’s new Trump book

This article originally appeared on AlterNet. Astounding claims about former President Donald Trump are being highlighted in Bob Woodward and Robert Costa's new book, "Peril." Here are five of the most shocking revelations from the book. 1. Trump was angry with Paul Ryan for criticizing protestors in Charlottesville because "these...
POTUS・20 HOURS AGO
Washington Post

Milley’s revelation about Trump leaves us with five questions

We already knew the disgraced former president was suffering from the delusion that he won the 2020 election. We knew he tried to twist arms to overthrow the election. And we knew he refused for hours to call off the insurrectionists whom he inspired to attack the Capitol on Jan. 6. What we did not know is how irresponsible so many other Republicans were and continue to be in tolerating and enabling him.
POTUS・3 DAYS AGO
NBC News

Pence's Trump enabling was worse than we thought. Woodward and Costa's book proves it.

Throughout the past five years, I’ve found myself thinking a lot about the often-paraphrased (and incorrectly attributed) adage, “The only thing necessary for evil to triumph is for good men to do nothing.” To me, it goes a long way toward explaining how former President Donald Trump successfully hijacked the Republican Party. There simply weren’t enough Dan Quayles (yes, you read that right) around and all too many Mike Pences.
POTUS・2 DAYS AGO
Washington Post

Ever since Mike Pence announced on Jan. 6 that he lacked power to help Donald Trump overturn the 2020 election in Congress, it’s been widely suggested that the vice president was one of the few heroes in this ugly tale. But new revelations in the forthcoming book by Post reporters...
POTUS・4 DAYS AGO

Boxing, ‘Moonies’ and Firefighter Selfies: Trump’s Strange 9/11 of One

On the 20th anniversary of the attacks, Trump found ways to keep the spotlight on him. And make a little money.
POTUS・2 DAYS AGO
MSNBC

Lawrence O’Donnell explains Donald Trump’s history of lying about 9/11 and why Donald Trump is afraid to repeat his worst lie.Sept. 15, 2021.
POTUS・4 DAYS AGO
Newsweek

"They are happy to be activists when it's politically advantageous," Donald Trump's daughter-in-law said on Fox News.
POTUS・13 DAYS AGO

Ivanka Trump repeatedly implored her father, then-President Donald Trump, to disavow his claims that voter fraud cost him the 2020 election as he watched news coverage of the deadly Jan. 6 riot at the US Capitol, according to a forthcoming book. Washington Post associate editor Bob Woodward and reporter Robert...
PRESIDENTIAL ELECTION・3 DAYS AGO
WashingtonExaminer

The office of former first lady Melania Trump said a book soon to be released by Stephanie Grisham, her former chief of staff, is merely an effort "to gain relevance and money at the expense of Mrs. Trump."
POTUS・4 DAYS AGO
Newsweek

Newsmax host yells, cuts off feed during interview with veteran who criticized Trump

Just days after the fatal Capitol insurrection on January 6, Trump's top military adviser secretly maneuvered to stop Donald Trump from "going rogue" and launching an all-out nuclear war with China, according to bombshell revelations from a forthcoming book excerpted by CNN and The Washington Post. The book, titled "Peril,"...
POTUS・4 DAYS AGO
Newsweek

Previously, the senator reportedly told Trump he had been "written off as dead" because of the U.S. Capitol riot.
POTUS・2 DAYS AGO
Washington Examiner

House Speaker Nancy Pelosi mocked the possibility of former President Donald Trump running again in 2024. The California Democrat made jabs at Trump during an event at Cambridge University on Thursday when talking about the Jan. 6 riot at the Capitol. "I reference him from time to time as 'What's-his-name,'"...
PRESIDENTIAL ELECTION・2 DAYS AGO

Former President Donald Trump said President Joe Biden has not taken action against Gen. Mark Milley because the Joint Chiefs of Staff chairman may harbor "dirty secrets" about the withdrawal of U.S. forces from Afghanistan.
POTUS・3 DAYS AGO
Newsweek

"You unelect these bastards, that's what you do. You don't give them another shot, another bite at the apple," Steele said
POTUS・2 DAYS AGO
Fox News

Former fashion executive and liberal New York City socialite Stephanie Winston Wolkoff claimed Monday that "all Melania Trump brings to the table" is her looks, as she celebrated the former First Lady's exclusion from the elite Met Gala. Appearing on MSNBC's "The ReidOut," the former advisor and friend to Trump...
POTUS・4 DAYS AGO
Boston Globe

For those who pay more than lip service to democracy, and thus realize both its value and fragility, one barometric question this year has been whether the Republican Party will come to its senses regarding Donald Trump and Trumpism. Over the last half-decade, it was disquieting to watch as one...
PRESIDENTIAL ELECTION・4 DAYS AGO