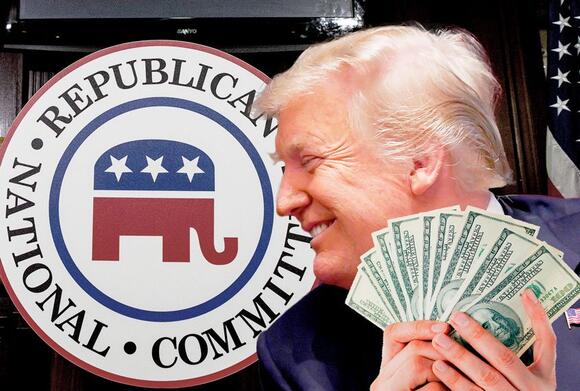 The Republican Party announced in a press release Sunday that they would not pass a Republican Party Platform at their convention in 2020. Democrats had their regular committees and caucuses, which debated and handled the business of a political party. Republicans won't be able to handle that with just a few weeks to set up the event.

To make it worse, the GOP also just copied and pasted their 2016 platform without editing it. It means that an attack on the White House and the current administration was left in the copy.

"The current Administration has exceeded its constitutional authority, brazenly and flagrantly violated the separation of powers, sought to divide America into groups and turn citizen against citizen," the platform says.

See the excerpt below:

The US secretary of state, Antony Blinken, fought back laughter on Capitol Hill on Tuesday as the Republican senator James Risch relentlessly questioned him about a rumor that someone on the White House staff “pushes the button and cuts [Joe Biden] off mid-sentence” with a wireless device. “Somebody in the...
CONGRESS & COURTS・1 DAY AGO
Washington Examiner

House Speaker Nancy Pelosi mocked the possibility of former President Donald Trump running again in 2024. The California Democrat made jabs at Trump during an event at Cambridge University on Thursday when talking about the Jan. 6 riot at the Capitol. "I reference him from time to time as 'What's-his-name,'"...
PRESIDENTIAL ELECTION・1 DAY AGO
Newsweek

America went from the strongest Presidency since Ronald Reagan to its weakest since Barak Obama in just eight months. I believe Joe Biden was the worst President by days end on January 20, when he signed away many American freedoms. But it took an international debacle of his doing to show a world his lack of empathy and feeble ways.
PRESIDENTIAL ELECTION・2 DAYS AGO
Newsweek

Almost half of Republican voters, 49 percent, said that a candidate other than former President Donald Trump would stand a better chance of winning in 2024, according to a new poll.
PRESIDENTIAL ELECTION・5 DAYS AGO
Business Insider

Rep. Jim Jordan was seen in a video saying Trump is 'ready to announce' a 2024 run, but the Ohio lawmaker's spokesperson denied it

"He's going to run again," Jordan told Lauren Windsor of "The Undercurrent." "He's about ready to announce after all this craziness in Afghanistan."
PRESIDENTIAL ELECTION・14 DAYS AGO
POLITICO

CALIFORNIA SPLIT — Remember this moment, because it might be a point of no return. The aftermath of today’s California recall vote appears likely to herald the arrival of a new stage of election trutherism, in which large numbers of voters — and candidates — insist ordinary elections are rife with fraud and refuse to acknowledge the legitimacy of the outcome.
CALIFORNIA STATE・3 DAYS AGO

"I have purposefully not had them on, frankly, because I don't want to hear their crap," Wallace said on "The Late Show with Stephen Colbert."
PRESIDENTIAL ELECTION・6 DAYS AGO
buzzfeednews.com

After nearly five months, Arizona’s sham “audit” has yet to produce evidence of widespread voter fraud in the 2020 election, and supporters of former president Donald Trump appear to be tired of waiting. The audit of the vote in the state’s largest county was originally supposed to last 60 days,...
ARIZONA STATE・9 DAYS AGO
Washington Times

In 2020, Stephen Richer defeated an incumbent Democrat to become Maricopa County Recorder. Since then, his job has been anything but boring.
MARICOPA COUNTY, AZ・2 DAYS AGO
Newsweek

Trump reportedly knew Pence had no plans to send the election results back to states before he addressed his supporters on January 6 but continued the pressure.
PRESIDENTIAL ELECTION・1 DAY AGO
Newsweek

Donald Trump was defeated by Joe Biden by 11,779 votes in Georgia, and officials have found no evidence of widespread voter fraud.
GEORGIA STATE・1 DAY AGO
CNBC

Rep. Liz Cheney told Donald Trump to "Bring it" after the ex-president endorsed a primary challenger to the Wyoming Republican on Thursday. Cheney has faced intense criticism from members of her own party for calling on fellow Republicans to abandon their loyalty to Trump. Trump also claimed in his statement...
WYOMING STATE・9 DAYS AGO
POLITICO

Larry Elder's landslide defeat is the latest evidence that the idea the 2020 presidential election was stolen is poison for Republicans.
PRESIDENTIAL ELECTION・1 DAY AGO
Washington Post

Larry Elder tried his own Big Lie. He did Democrats — and democracy — a favor.

Will Wilkinson publishes the Model Citizen newsletter. He is a senior fellow at the Progressive Policy Institute. This week, Democratic California Gov. Gavin Newsom crushed the bid to oust him from office by a roughly 27-percentage-point, 2.5 million-vote margin, with around three-quarters of votes counted as of Wednesday. Unseating Newsom was unlikely. But that didn’t stop Republican Larry Elder — the hard-right radio personality who emerged as Newsom’s leading challenger — from trying to preemptively delegitimize the result with intimations of voter fraud.
POLITICS・1 DAY AGO
FiveThirtyEight

As it is every two years, control of the House and Senate will once again be at stake in the November 2022 midterm elections, and one of the best tools we have for predicting those election results is polling of the generic congressional ballot. The generic congressional ballot question typically asks respondents which party they intend to vote for in the upcoming congressional election, without naming specific candidates1 — allowing the question to be asked nationally to gauge the overall political environment. And for several years now, we at FiveThirtyEight have been collecting these polls and calculating a weighted average for them, and we’re excited today to publish our generic ballot average for the 2022 election cycle.
PRESIDENTIAL ELECTION・2 DAYS AGO
Business Insider

McConnell is determined to resist Democratic pressure to raise the debt ceiling alongside them. The showdown could derail the economic recovery.
CONGRESS & COURTS・3 DAYS AGO
Newsweek

What's the Punishment for Treason? Trump Calls for General Milley to Be Charged With Crime

The former president called for the Joint Chiefs chairman to be charged with treason if a new book's account of an incident involving China is true.
POTUS・3 DAYS AGO