Amazing Memories! See Vin Diesel’s Cutest Moments With His Kids On and Off the Red Carpet 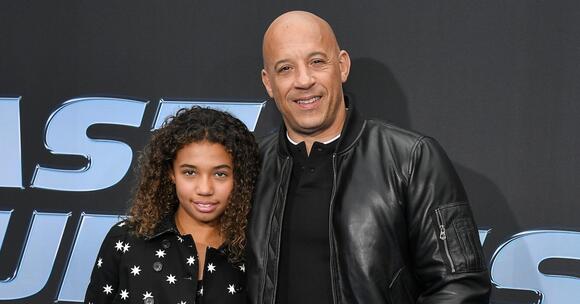 “My kids move me to tears all the time,” he previously gushed to People. “My daughter Similce said to me a couple of weeks ago, ‘Daddy, I know what song should be at every funeral.’ I said, ‘What is it?’ And she said, ‘See You Again.’ That was not fair.”

Just like her dad, Similce might have what it takes to be the next big action hero. She already made her acting debut in the Netflix series Fast & Furious: Spy Racers. While recalling his eldest kiddo’s 2008 birth to Variety, the dad of three revealed his oldest daughter was born during one of his films.

“I’ll never forget what he said to me. He said, ‘Vin, you go into that hospital room, and you cut the umbilical cord. It will be the best day of your life,'” the Chronicles of Riddick actor continued. “That’s the day that she was born. I say that because that’s how real the themes of familyhood [sic] run in the Fast & Furious saga, and why I am so proud.”

Keep scrolling to see all of the cutest moments that Vin has had with his kids!

Watch: How Meadow Walker Keeps Paul Walker's Legacy Alive. Paul Walker may be gone, but he's not forgotten. Vin Diesel joined the rest of the Fast and the Furious family in remembering the late actor on Tuesday, Nov. 30, eight years after Paul died in a car accident. Vin took...
CELEBRITIES・5 DAYS AGO
Closer Weekly

Eve and her husband, Maximillion Cooper, have been making our hearts weep with joy ever since they tied the knot in 2014. The Talk alum’s romance with the British millionaire started years before, however, and their cutest photos together prove they’re still happier than ever. Eve and Max first crossed...
RELATIONSHIPS・25 DAYS AGO
Hello Magazine

Anyone who watched Family Ties during its seven-season run in the 1980s will remember the four kids of the Keaton family. Young Republican brother Alex was played by Michael J. Fox. Fashion-loving teen Mallory was portrayed by Justine Bateman. The role of youngest sibling Andy—a new addition in season 3—went to Brian Bonsall. And then there was sister Jennifer, who loved sports and who actually shared her parents' liberal political opinions, unlike her siblings. Jennifer was played by Tina Yothers, who started Family Ties as a nine-year-old and is now 48.
TV SERIES・12 DAYS AGO

Mom of three Christie Brinkley adores any amount of time she gets to spend with her kids, Sailor Brinkley-Cook, Alexa Ray Joel and Jack Cook. Being a mom is her greatest achievement yet and she never fails at giving good advice to her children whenever they need it. “She’s mostly...
FAMILY RELATIONSHIPS・6 DAYS AGO
ComicBook

Fast & Furious star Vin Diesel has revealed that his daughter, Hania Riley Sinclair served as maid of honor at the wedding of Meadow Walker, model and the daughter of late actor Paul Walker. Tuesday, November 30th was the eight-year anniversary of Paul Walker's death in a 2013 car crash; Diesel held a memorial to his co-star and friend on Instagram, sharing a photo of their respective daughters all grown and side-by-side before Meadow walked down the aisle. The touching photo also came with a lengthy message to Paul Walker – a tradition Diesel has maintained since losing his friend.
TRAFFIC ACCIDENTS・4 DAYS AGO
Indy100

Tom Holland and Zendaya felt that their privacy was “robbed” after the paparaazi leaked photos of them kissing. In the recent GQ Men of the Year issue, Holland spoke about their fame and how “privacy isn’t really in our control anymore.”. “I’ve always been really adamant to keep my private...
CELEBRITIES・17 DAYS AGO
Closer Weekly

Stanley Tucci Loves Being a Dad of 5! See the Actor’s Most Touching Quotes About Fatherhood

Stanley Tucci has had tons of breakout roles in blockbuster films that helped him become one of the most in-demand actors in Hollywood. In addition to starring alongside big names like Meryl Streep and Jennifer Lawrence, Stanley takes pride in being a father to his five children. The Easy A actor is always sharing love for his blended family with his wife, Felicity Blunt.
FAMILY RELATIONSHIPS・6 DAYS AGO

‘I’m So In Love!’ Lil Uzi Gifts Girlfriend JT A $300K McLaren 720S For Her Birthday, Rents Out Amusement Park

Some of us can’t even get a McChicken or Mcnugget from these men but our good sis JT got a brand new 2022 McLaren 720S from her boo Uzi!. City Girls rapper, JT, just celebrated her 29th birthday and her boyfriend, Lil Uzi Vert, made sure her day was very special. The birthday festivities started off with a simple birthday dinner then escalated from there. At dinner JT had a heartfelt card waiting on her with details of what to expect for her gift. Uzi had cute hand-drawn images on the card as well as a heart and rocket, indicating that she would now be able to jet off into the sunset. Inside the card was a pair of keys to her brand new whip waiting outside the restaurant!
CELEBRITIES・9 HOURS AGO
Vulture

Vin Diesel’s Message to the Late Paul Walker: ‘Look at This Photo, Pablo, It Will Make You Smile’

Nothing is more important than family to Dom Toretto. On the eighth anniversary of Paul Walker’s passing, Vin Diesel penned a message on Instagram to his late co-star, recalling a moment they shared on the set of Fast & Furious 4 about starting their own families. “When we were done...
CELEBRITIES・4 DAYS AGO
Life and Style Weekly

Brad Pitt Is ‘Proud’ to See Daughter Shiloh on Red Carpets: ‘It’s a Confidence Boost’ for Her

Rocking the red carpet in style! Brad Pitt is “happy” that his daughter Shiloh Jolie-Pitt is “coming out of her shell” while appearing on red carpets with her mother, Angelina Jolie, a source tells In Touch. “Brad doesn’t want her growing up so fast but he’s proud to see her...
CELEBRITIES・11 DAYS AGO
goodhousekeeping.com

Christmas is right around the corner, and holiday movie marathons are a top priority. What better place to start than Lifetime, which always has an impressive lineup of holiday flicks to get you in the festive mood. As every Lifetime viewer knows, the movies are good and the plots are precious. Case in point? The Liddle franchise starring none other than Destiny’s Child’s Kelly Rowland.
MOVIES・1 DAY AGO

Machine Gun Kelly walked the American Music Awards red carpet with his 12-year-old daughter Casie last night, and the moment could not have been sweeter. Like, the matching outfits? The fact that MGK wore a ring that says "dad?" The cute little pinkie-finger-thumb-kiss moment?. Literally the sweetest—and don't worry, MGK...
CELEBRITIES・13 DAYS AGO
Closer Weekly

Angelina Jolie’s daughter Shiloh Jolie-Pitt looked effortlessly cool in ripped jeans and a sweatshirt while hitting the red carpet with her mom and brother Pax Jolie-Pitt for the premiere of the new documentary Paper & Glue. The trio dressed casually for the Los Angeles-based event on Thursday, November 18, ​​with...
CELEBRITIES・16 DAYS AGO
Outsider.com

When you think of an Outsider’s paradise, it might look a little different than the Hollywood image. I mean, I love beaches as much as the next guy, but the forest is where we thrive. Fishing, hunting, hiking, camping. And not a soul in sight? Now that’s the true definition of paradise. Apparently, Vin Diesel gets it too.
CELEBRITIES・11 DAYS AGO
thezoereport.com

11 Cute Photos Of Celebrities & Their Kids On The Red Carpet

To see your favorite stars on the red carpet is exciting, but to see them with their families is truly heartwarming. Ahead, find 11 cute photos of celebrities and their kids on the red carpet.
FAMILY RELATIONSHIPS・3 DAYS AGO
NME

Vin Diesel has paid tribute to Paul Walker on the anniversary of the Fast And Furious actor’s death. The pair worked together in the hit franchise before Walker’s death in a car crash in 2013 at the age of 40. Diesel posted a black and white photo on Instagram of...
TRAFFIC ACCIDENTS・4 DAYS AGO
ComicBook