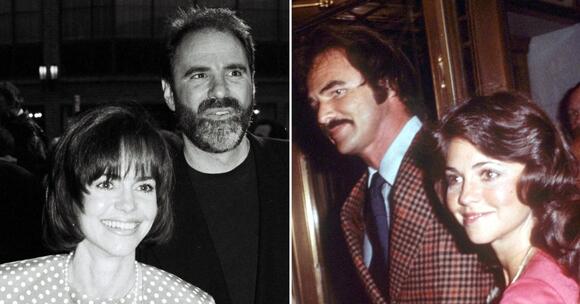 Sally Field has been on our screens for more than five decades, but while she’s been very busy with her career, she’s also focused on her personal life. Throughout the years, she’s been married twice and also had a long-term relationship with Burt Reynolds.

The Mrs. Doubtfire actress exchanged vows with her first husband, Steven Craig, in 1968. The couple became the proud parents of their sons, Peter Craig and Eli Craig, but they sadly split after seven years of marriage in 1975.

Two years after ending things with her first husband, the A-lister and her Smokey and the Bandit costar, Burt, started dating. Though it was rocky at times, their iconic relationship lasted for five years before they called it quits in 1982.

“He was an important part of my life for a very long period of time,” Sally gushed during a press appearance for her memoir In Pieces in December 2018, which came just three months after Burt’s death in September. “He was a catalyst for me in a lot of ways, and I probably was for him.”

Following her split from Burt, Sally walked down the aisle again for a second time in 1984, this time with Alan Greisman. The Flying Nun alum and the Hollywood film producer expanded the movie icon’s family when they welcomed her youngest son, Sam Greisman, in 1987. However, the former pair divorced in 1994.

It’s been years since the Academy Award winner was in a relationship, but Sally isn’t stressed about being single. “I’m really happy with how I am, and I really don’t want to pick up your underwear in the morning, you know?” she jokingly dished during her book event.

Aside from focusing on her iconic showbiz career, Sally also keeps herself occupied with her children. “The three things I’m most proud of in my life are my sons,” she gushed to Closer Weekly in February 2020. “They are kind, loving, productive people. Each with their own list of talents and accomplishments.”

These days, Sally also adores being a doting grandma to her five grandkids, Isabel, Sophie, Ogden, Noah and Colin. “She loves having so many grandchildren,” an insider told Closer. “She’s fun and goofy with them.”

Scroll through the gallery below to learn more about Sally’s relationships!

The press dubbed her “the Love Goddess,” and her fans worshipped her. Known as much for her fiery hair and voluptuous figure as she was for her acting, Rita Hayworth became a cultural icon in films, including Gilda and Pal Joey. She was so universally loved by G.I.s that in 1946 her image was drawn onto the side of an atomic bomb. Said Orson Welles, who was married to this real-life bombshell at the time: “I want my daughter to be able to tell her daughter that Grandmother’s picture was on the last atom bomb ever to explode.”
CELEBRITIES・16 DAYS AGO
Closer Weekly

Nicolas Cage Has Been Married 5 Times! Meet the Oscar Winner’s Wife Riko and His 4 Ex-Spouses

He is one of the most fascinating actors ever — but while Nicolas Cage is known for his extensive film resume, he has also made headlines for his relationships. If you’re not familiar, the Oscar winner has walked down the aisle five times, with his most recent marriage in February 2021.
RELATIONSHIPS・17 DAYS AGO
Closer Weekly

A talented pair! Longtime actor Gene Hackman and his second wife, retired classical pianist Betsy Arakawa, got married in 1991 and have been going strong ever since. To learn more about her and the pair’s marriage, keep reading. How did Gene Hackman and Betsy Arakawa meet?. The Royal Tenenbaums...
CELEBRITIES・5 DAYS AGO
Closer Weekly

Golden Globe winner Jason Bateman found fame as a child actor on Little House on the Prairie in 1981. He has since gone on to direct and star in the Netflix hit series Ozark, playing father of two Marty Byrde. In his life away from the small screen, Jason is a doting dad of two adorable daughters, Francesca and Maple, with his wife, Amanda Anka.
FAMILY RELATIONSHIPS・10 DAYS AGO

All of the Celebrity Couples Who Ended Their Relationships in 2022: See Which Stars Broke Up

Many of your favorite celebrity couples have decided to part ways in 2022. Maintaining a relationship in the public eye is definitely not easy, and some are ready to start new chapters in their lives. Celebrity breakups are devastating for some fans, with one popular Hollywood couple, Lisa Bonet and Jason Momoa, announcing their shocking split at the start of the year.
RELATIONSHIPS・11 DAYS AGO
Closer Weekly

All of the Celebrities We Lost in 2022: A Tribute to the Hollywood Stars Who Died This Year

Gone too soon. With 2022 in full swing, the world is ailing from the loss of some major Hollywood icons. Celebrity deaths are truly devastating and their contributions to the world of entertainment will never be forgotten. For some, 2022 started off as a year of new beginnings. Though the...
CELEBRITIES・14 DAYS AGO
Closer Weekly

Jack Nicholson Was Married Once at the Height of His Fame: Meet the Actor’s Ex-Wife Sandra Knight

For more than 50 years, Jack Nicholson dominated blockbuster films in Hollywood and earned countless awards in the process. He was married once during his bustling career to actress Sandra Knight. The pair walked down the aisle in 1962 and were divorced in 1968. Sandra, born in 1939, grew up...
CELEBRITIES・4 DAYS AGO
Closer Weekly

Late Actor Sidney Poitier Loved Being a Father of 6: Meet His Daughter’s Carrying On His Legacy

Bahamian-American actor Sidney Poitier led a tremendous career full of milestones since landing his first major film role in the ‘50s. He was the first Black man to ever win the Best Actor Oscar for his part in the 1963 film Lilies of the Field. The Bahamian Ministry of Foreign Affairs Office confirmed the actor’s death to Fox News on January 7, 2022. Sidney, who died at age 94, is survived by his six daughters who have supported him throughout his time in Hollywood.
CELEBRITIES・17 DAYS AGO

Her best-kept secret. Dolly Parton and her husband, Carl Dean, have been married for more than 50 years, but they’re rarely seen together — and that’s just the way they like it. The country icon first met her future spouse when she moved to Nashville in 1964...
RELATIONSHIPS・5 DAYS AGO
Closer Weekly

In 1966, Burt Ward shot to fame playing Robin in the television series Batman on ABC. After three successful seasons, he went on to garner over 40 acting credits before starting his own visual effects company in 2001. In between dazzling audiences as a caped crusader, and dedicating his life to animal activism, Burt became a father to two children: Lisa Ann Ward and Melody Lane Ward.
FAMILY RELATIONSHIPS・7 DAYS AGO
Closer Weekly

Patrick Dempsey and Wife Jillian Fink Found Their Way Back to Each Other! See His Best Quotes About Marriage

For Grey’s Anatomy actor Patrick Dempsey, his marriage to Jillian Fink is something worth fighting for. The Golden Globe nominee and his stunning wife were married in 1999 and welcomed three children together: Talula, Darby and Sullivan. They hit a rough patch in 2015 and filed for divorce, but later reconciled, proving that their love was meant to last.
RELATIONSHIPS・7 DAYS AGO
Closer Weekly

David Foster and Katharine McPhee Are Happily in Love! See Their Sweetest Quotes About Their Marriage

Canadian composer David Foster and singer Katharine McPhee first met when she was a contestant on season 5 of American Idol in 2006. The pair struck up a great friendship that later blossomed into a happy marriage. David and Katharine are still just as crazy about each other as they were from the start, always sharing the details about their special connection with their fans.
RELATIONSHIP ADVICE・26 DAYS AGO

We wonder if these Hollywood parents knew what to expect when they were expecting! Tons of your favorite actors and actresses, like Sofia Vergara, Will Smith, Kate Hudson, as well as many others, became parents at a super young age. Some of them were just starting out their entertainment careers and adapted quickly to the pressures of making it big while juggling their new responsibilities.
CELEBRITIES・14 DAYS AGO
Closer Weekly

Lily Tomlin and her wife, Jane Wagner, are one of Hollywood’s greatest love stories. Although the Grace & Frankie actress and the writer got married in 2013, the couple has actually been together since the early ’70s. To learn more about Jane and the pair’s relationship, keep reading!
BEAUTY & FASHION・11 DAYS AGO
Us Weekly

It seems things between Sara Evans and Harry “Jay” Barker are starting to get ugly. The country singer married the former football player in 2008, one year after she finalized her divorce from Craig Schelske. Evans and Schelske’s relationship made headlines in 2006 when she abruptly left Dancing With the Stars as her marriage crumbled amid allegations of cheating from both Evans and Schelske. The former couple, who wed in 1993, share three kids.
RELATIONSHIPS・7 DAYS AGO
Closer Weekly

After Nicole Kidman gave birth to her daughter Sunday in 2008, she thought about retiring from acting. The plan was “to have my baby and sit on a farm,” she recalls. “I was quite convinced I could grow vegetables and be at home and be very satisfied.”
CELEBRITIES・9 DAYS AGO
Closer Weekly

Some of the most popular shows on television came from the mind of Norman Lear, a writer and producer with an iconic career. The All in the Family creator has a blended family of his own. During his three marriages, Norman welcomed six children: Ellen, Kate, Maggie, Benjamin, Brianna and Madelaine.
FAMILY RELATIONSHIPS・7 DAYS AGO
Closer Weekly

Betty White Then and Now: See the Hollywood Icon Through the Years!

What a legend! Betty White was a part of Hollywood since 1945 when she made an appearance as “Lou’s Girl” in a short titled Time to Kill. But that was just the beginning of an illustrious career before her tragic death at age 99 in December 2021.
CELEBRITIES・24 DAYS AGO
Us Weekly

Summer House’s Kyle Cooke and Amanda Batula’s Relationship Timeline: From Reality Costars to Husband and Wife and Beyond

Not just a summer romance! Kyle Cooke and Amanda Batula have weathered reality TV drama, cheating scandals and wedding delays throughout their relationship — and they’re still going strong. The Summer House stars’ romance has played out on the Bravo series since season 1, which premiered in January...
RELATIONSHIPS・7 DAYS AGO