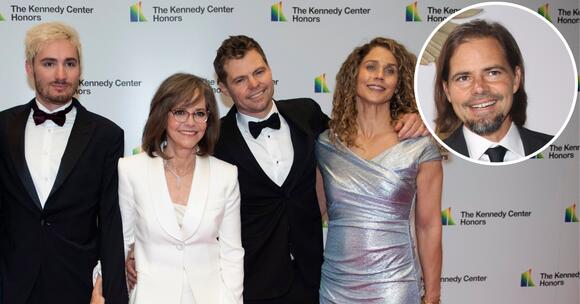 Sally Field has traveled the world as a Hollywood star, but nothing brings her as much joy as the time she spends with her three kids. The Smokey and the Bandit actress is the proud mother of her “loving” sons, Peter Craig, Eli Craig and Sam Greisman.

Sally first experienced motherhood when she welcomed her eldest child, Peter, in 1969. The Flying Nun star gave birth to her child alongside her then-husband, Steven Craig. The former couple, who married in 1968, also became the parents of son Eli in 1972, but they split three years later in 1975.

The Academy Award winner expanded her family during her second union with Alan Greisman. Sally and the film producer welcomed the actress’ youngest son, Samuel, in 1987, but they called it quits after 10 years of marriage in 1994.

Even though it didn’t work out with her former lovers, the Steel Magnolias alum is grateful to have experienced parenthood. Without Steven and Alan, Sally would’ve never had the opportunity to raise Peter, Eli and Samuel.

“The three things I’m most proud of in my life are my sons,” Sally exclusively shared with Closer Weekly in February 2020. “They are kind, loving, productive people. Each with their own list of talents and accomplishments.”

Sally added because her sons are her entire “existence,” she isn’t caught up in looking for love. “I’m not married; I’m not the kind of person that has a life separate from them,” Sally added. “That’s my family. That’s my everything.”

A friend close of the Mrs. Doubtfire star noted she also adores being a grandmother to her five grandkids, Isabel, Sophie, Ogden, Noah and Colin. “She loves having so many grandchildren,” the pal told Closer. “She’s fun and goofy with them.”

Even though Sally swears she’s happier than ever being a single lady, the friend insisted she wouldn’t be surprised if the Norma Rae star gave love another shot with the right man.

“If she met someone special, she wouldn’t hide him,” the friend revealed. “At heart, Sally is a perpetual optimist, but she’s happy in her own skin.”

Scroll through the gallery below to learn more about Sally’s three sons, Peter, Eli and Samuel!

Wow, the one on the circle is the male version of his mom!

Patrick Dempsey Is Crazy About His Children! Meet the ‘Grey’s Anatomy’ Alum’s 3 Kids

Patrick Dempsey may be known as Dr. Derek “McDreamy” Shepherd to fans on Grey’s Anatomy, but he plays a much bigger role off-screen: He’s the loving father of three wonderful kids. After tying the knot with wife Jillian Fink in 1999, the iconic actor went on to become the proud dad of Talula, Sullivan and Darby.
FAMILY RELATIONSHIPS・12 DAYS AGO
Closer Weekly

Steve Harvey Has a Lot of Love to Give His Big Family! Meet the TV Star’s 7 Children

Steve Harvey has become a staple on daytime TV as the host of Family Feud and The Steve Harvey Show, but when he’s around his kids, the star is just a dad. Despite his celebrity status, Steve is a typical loving father to his seven children, Karli, Brandi, Broderick, Wynton, Morgan, Jason and Lori.
FAMILY RELATIONSHIPS・9 DAYS AGO
Closer Weekly

Golden Globe winner Jason Bateman found fame as a child actor on Little House on the Prairie in 1981. He has since gone on to direct and star in the Netflix hit series Ozark, playing father of two Marty Byrde. In his life away from the small screen, Jason is a doting dad of two adorable daughters, Francesca and Maple, with his wife, Amanda Anka.
FAMILY RELATIONSHIPS・12 DAYS AGO
Closer Weekly

Jack Nicholson Was Married Once at the Height of His Fame: Meet the Actor’s Ex-Wife Sandra Knight

For more than 50 years, Jack Nicholson dominated blockbuster films in Hollywood and earned countless awards in the process. He was married once during his bustling career to actress Sandra Knight. The pair walked down the aisle in 1962 and were divorced in 1968. Sandra, born in 1939, grew up...
CELEBRITIES・5 DAYS AGO

For over six decades, comedian Don Rickles insulted a who’s who of Hollywood’s elite, but at home he was simply a dad. “He was very kind and sweet, nothing like his act,” his daughter, Mindy Rickles, who followed in his footsteps as a stand-up comedian, tells Closer.
CELEBRITIES・13 DAYS AGO
Closer Weekly

Betty White Has Been Married 3 Times — Get to Know the ‘Golden Girls’ Star’s Husbands!

We all know that Betty White had an incredible career that spanned more than 70 years, but she also lived quite the personal life — she was married three times. The Golden Girls alum, who died at age 99 in December 2021, first tied the knot to a man named Dick Barker, which was then followed by a marriage to Lane Allen and then a longtime marriage to Allen Ludden. While the legend did not have any biological children during her relationships, she is a stepmom to her third husband’s kids — David, 71, Martha, 69, and Sarah, 67 — and continues in her role ever since Allen passed away after a battle with stomach cancer.
RELATIONSHIPS・26 DAYS AGO
Closer Weekly

John Travolta Is Always Gushing About Fatherhood! See the ‘Grease’ Actor’s Best Quotes About Being a Dad

Actor John Travolta starred in countless blockbuster films and became a heartthrob in the ‘70s, but by far, his most rewarding role is being a father. The Grease star and his late wife, Kelly Preston, welcomed three children together: Ella, Benjamin, and late son Jett. Life as a single father has been an adjustment, but John’s bond with his children has only gotten stronger.
FAMILY RELATIONSHIPS・12 DAYS AGO
Closer Weekly

Ron and Jasmine Cephas Jones Are a Powerful Acting Duo! Meet the ‘This Is Us’ Star’s Emmy-Winning Daughter

Like father, like daughter! This Is Us star Ron Cephas Jones has captivated audiences with his portrayal of William Hill on the hit NBC drama series since 2016. His daughter, actress Jasmine Cephas Jones, followed in his footsteps to lead her own successful career in Hollywood. The duo have gone on to act side by side and made Emmys history together in 2020.
CELEBRITIES・22 DAYS AGO

Longtime favorite and beloved actress Betty White has died at age 99, People can confirm. The former Golden Girls star died the morning of Friday, December 31, in her home nearly three weeks shy of her 100th birthday. “Even though Betty was about to be 100, I thought she would...
CELEBRITIES・26 DAYS AGO
Closer Weekly

Lily Tomlin and her wife, Jane Wagner, are one of Hollywood’s greatest love stories. Although the Grace & Frankie actress and the writer got married in 2013, the couple has actually been together since the early ’70s. To learn more about Jane and the pair’s relationship, keep reading!
BEAUTY & FASHION・13 DAYS AGO
Closer Weekly

Late Actor Sidney Poitier Loved Being a Father of 6: Meet His Daughter’s Carrying On His Legacy

Bahamian-American actor Sidney Poitier led a tremendous career full of milestones since landing his first major film role in the ‘50s. He was the first Black man to ever win the Best Actor Oscar for his part in the 1963 film Lilies of the Field. The Bahamian Ministry of Foreign Affairs Office confirmed the actor’s death to Fox News on January 7, 2022. Sidney, who died at age 94, is survived by his six daughters who have supported him throughout his time in Hollywood.
CELEBRITIES・19 DAYS AGO
Outsider.com

American actress Sally Field released her memoir in 2018 just days after her co-star and former lover Burt Reynolds passed away. The timing was ironic but not intended — Fields was going to release her memoir regardless. But the Smokey and the Bandit star later confessed that she was “pleased” Reynolds did not get a chance to read the details for himself.
CELEBRITIES・3 DAYS AGO

‘Law & Order’ Star Mariska Hargitay Loves Being a Mom of 3! See Her Best Quotes About Her Adorable Kids

Emmy-winning actress Mariska Hargitay has led Law & Order and its spinoffs since 1999, cementing herself as one of the top drama actresses on television. She and her husband, Peter Hermann, met on the set of ​​Law & Order: SVU in 2001. The couple got married in 2004 and welcomed three children together: August, Amaya and Andrew.
FAMILY RELATIONSHIPS・21 HOURS AGO
Closer Weekly

Legendary Performer and Activist Harry Belafonte Is a Father of 4! Meet His Talented Kids

Early on in his career, Harry Belafonte established himself as a triple threat, acting, singing and songwriting. The legendary performer had a major career breakthrough in the ‘50s, winning a Tony Award for his performance in John Murray Anderson’s Almanac. Throughout his career spanning more than 70 years, Harry became a father of four children: Adrienne, Shari, David and Gina.
FAMILY RELATIONSHIPS・23 HOURS AGO
Closer Weekly

The press dubbed her “the Love Goddess,” and her fans worshipped her. Known as much for her fiery hair and voluptuous figure as she was for her acting, Rita Hayworth became a cultural icon in films, including Gilda and Pal Joey. She was so universally loved by G.I.s that in 1946 her image was drawn onto the side of an atomic bomb. Said Orson Welles, who was married to this real-life bombshell at the time: “I want my daughter to be able to tell her daughter that Grandmother’s picture was on the last atom bomb ever to explode.”
CELEBRITIES・18 DAYS AGO
Closer Weekly

Singer Carole King Was Married 4 Times Throughout Her Career: All About Her Love Life and Ex-Husbands

Legendary artist Carole King has made tremendous contributions to the rock genre over the course of her 60-year career. Much of her early success was thanks in part to collaborations with her first husband, Gerry Goffin. The “Where You Lead” singer was married four times and welcomed four children, Louise Goffin, Sherry Goffin, Molly Larkey and Levi Larkey.
RELATIONSHIPS・21 DAYS AGO
Closer Weekly

David Foster and Katharine McPhee Are Happily in Love! See Their Sweetest Quotes About Their Marriage

Canadian composer David Foster and singer Katharine McPhee first met when she was a contestant on season 5 of American Idol in 2006. The pair struck up a great friendship that later blossomed into a happy marriage. David and Katharine are still just as crazy about each other as they were from the start, always sharing the details about their special connection with their fans.
RELATIONSHIP ADVICE・28 DAYS AGO
Closer Weekly

Legendary rock singer Meat Loaf had a powerhouse voice and brought one of the best-selling album trilogies to life during his career. The “Bat Out of Hell” singer, who was well-loved by fans, friends and his supportive family, died on January 20, 2022. He is survived by his wife, Deborah Gillespie, and his two daughters, Pearl and Amanda.
CELEBRITIES・5 DAYS AGO
HollywoodLife

Holly Madison’s Kids: Everything To Know About Her 2 Adorable Children

Former Playboy Bunny Holly Madison is the proud mother of two sweet children. Find out more about her adorable brood here. Luckily for Holly, she found love with Pasquale Rotella, the founder of Electric Daisy Carnival, the largest electronic dance music festival. The two were married at Disneyland on Sept. 10, 2013, but ultimately separated in 2018, finalizing their divorce Feb 2019.
FAMILY RELATIONSHIPS・4 DAYS AGO
Closer Weekly

Betty White Then and Now: See the Hollywood Icon Through the Years!

What a legend! Betty White was a part of Hollywood since 1945 when she made an appearance as “Lou’s Girl” in a short titled Time to Kill. But that was just the beginning of an illustrious career before her tragic death at age 99 in December 2021.
CELEBRITIES・26 DAYS AGO