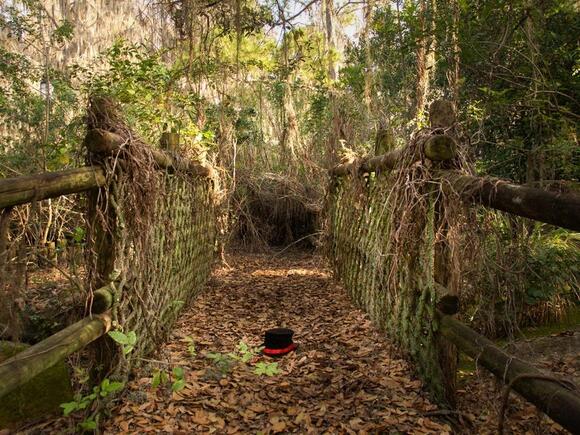 Discovery Island in Bay Lake has been abandoned since 1999.

The island could only be accessed from a Disney resort boat or a Walt Disney World Cruise and was known as a premier tourist destination from the 1970s to the 1990s.

It was originally called "Treasure Island" when it opened in 1974 as a bird sanctuary.

It was rebranded as "Discovery Island" in 1978, and it featured a range of exotic animals, an aviary, flamingo pool, and a beach for tourists.

Reasons it closed included a fear of wild-roaming alligators, accusations of staff mishandling the birds , and deadly bacteria found in the park's waters.

When it closed, the animals were moved to Disney World's Animal Kingdom Resort nearby.

The island has not been maintained since.

Visitors are prohibited from exploring the island.

Those caught trespassing could be arrested and banned from Disney World.

In fact, last year, that exact scenario happened. According to a police report acquired by USA Today , Richard McGuire, 42, of Mobile, Alabama, was arrested on April 30, 2020, after camping on Discovery Island for multiple days.

McGuire told police officers he was not aware that the park was closed to visitors.

Even if visitors were allowed, you probably wouldn't want to check out the area anyway.

Though some have sneaked onto the island to film the forgotten remains, the decrepit, abandoned buildings and overgrowth could pose a serious safety hazard to those who dare to enter the island.

After opening as the first water park at the Walt Disney World Resort in 1976, Disney's River Country closed in November 2001.

You can check out more photos from photographer Seph Lawless' expedition to the island here .

The park was designed to look like a swimming hole, with an artificial mountain featuring water slides.

As Disney's first water park , it was very popular.

River Country was very successful when it first opened, but in 1980 a boy died there due to an amoeba that breeds in freshwater.

The amoeba attacked his brain and nervous system, resulting in his death. Disney was absolved for this because the amoeba could have bred anywhere.

Disney was sued by the family, who claimed that there was no warning about how deep the water was. A lifeguard testified that they had to save dozens of kids from that slide daily.

However, the park continued to operate until 9/11, when a country-wide setback in tourism forced Disney to cut opening hours.

River Country then shut its doors for maintenance but never reopened. Disney announced its permanent closure in 2005, despite it having laid abandoned for three years before that.

Now the park is overgrown and decaying, and the area has a haunting quality to it.

The area is much different than it was when originally advertised in 1976.

One of their advertisements said, "Bring a swimsuit and a smile. You're likely to wear both out at River Country."

Now that it's abandoned, that advertisement sounds much creepier.

Nara Dreamland wasn't a "real" Disney resort, but it was built to resemble one.

It opened in 1961 as a Japanese version of California's Disneyland, complete with its own Main Street USA and Sleeping Beauty's castle.

It closed in 2006 due to dwindling attendance.

The desolate park had an eerie feel to it without any visitors.

In 2016, the park was demolished, meaning no more visitors could stop by to photograph its creepy forgotten rides.

An urban explorer has filmed an eerie town filled with abandoned Disney-esque castles, in footage that resembles a haunting fairytale. The Burj al Babas resort, in Turkey, was meant to attract wealthy tourists from the West and the Middle East, but has instead become a playground for thrill-seekers and adventurers.
WORLD・4 DAYS AGO
Only In Alabama

There’s no better family vacation than letting kids run around unattended, safe and self-sufficient with several activities. That is a brief synopsis of the Great Wolf Lodge, the newest all-inclusive 500-room luxury hotel that opened this summer in Manteca, a little under 2 hours northwest of Fresno. “We’re a stand-alone...
FRESNO, CA・2 DAYS AGO
Inside the Magic

Now that the Monorail station has reopened and the construction equipment is starting to disappear, the year-long renovation of Disney’s Polynesian Village Resort seems to finally be (almost) officially complete. At the time of the original refurbishment announcement in 2020, Disney shared:. “As we continue to reopen additional Disney Resort...
TRAVEL・9 DAYS AGO

Popular Disney Resort Is Getting a Big Makeover

Walt Disney World Resort’s Disney’s Art of Animation Resort hotel is popular with Guests for a number of reasons. It is the most “Disney-themed” Resort at Disney World, with characters from a number of Walt Disney Animation Studios and Pixar Animation Studios films — like The Lion King (1994), The Little Mermaid (1989), Cars (2006), and Finding Nemo (2003) — featured throughout the property.
TRAVEL・2 DAYS AGO
Only In Northern California

The largest reservoir in California, Lake Shasta offers pure bliss in the form of crystal blue waters and lush forest surroundings. Consisting of 30,000 acres and 370 miles of shoreline, there’s definitely plenty of space to stretch out and explore at this beloved lake! A stay at Tsasdi Resort, a stunning waterfront lodge, makes for […] The post This Waterfront Lodge On Lake Shasta In Northern California Exudes Old World Charm appeared first on Only In Your State.
TRAVEL・2 DAYS AGO
WDW News Today

Right on cue, Disney’s All-Star Music Resort has reopened to guests. And during the year-and-a-half long closure, it seems they’ve taken some time to “remaster” the lobby with a slightly new look. Fittingly, guests walk the red carpet to check into the resort. The focus of the remodel seems to...
MUSIC・10 DAYS AGO
WDW News Today

Yesterday, the menu was announced for Steakhouse 71, coming soon to Disney’s Contemporary Resort. Pricing for the new restaurant is now available on the Walt Disney World website. Breakfast. Lunch. Dinner. Sides and sauces are listed separately but are no extra charge. Appetizers & Desserts. These are the same for...
RESTAURANTS・13 DAYS AGO

Disney’s Contemporary Resort is proud to announce the return of the “Celebration at the Top” event at California Grill, beginning October 2. It’s back, but with a twist, and it’s better than ever!. Do you enjoy sophisticated evenings, high-energy cocktail parties, great food, great friends and a wide selection of...
TRAVEL・13 DAYS AGO
WDW News Today

With the massive overhaul of Disney’s Contemporary Resort currently underway, the hotel has become a maze of construction walls and scaffolding. But progress is being made, and these new lobby light fixtures are a prime example. These new pendant lights are a classic mid-century style with milk glass globes in...
LIFESTYLE・11 DAYS AGO
disneydining.com

Another Disney Resort Favorite Is Reopening Next Month!

It’s happening, Disney fans! Entertainment is making a comeback and we couldn’t be more thrilled to see the return of many of our favorites. From “A Celebration of the Festival of the Lion King” to “Beauty and the Beast – Live on Stage“, we’ve seen entertainers return to work at the Walt Disney World Theme Parks. Along with the Parks, some of the best of the best entertainment on the property will also be making a return. We previously shared the news that Yehaa Bob Jackson is heading back to Disney’s Port Orleans when it reopens next month. And now, YES – another Disney Resort favorite is returning to the stage.
LIFESTYLE・14 DAYS AGO
disneyfoodblog.com

All the parks around the world had massive closures last year (and into this year) due to the Coronavirus pandemic, but they’ve also closed in the past for various weather conditions. Shanghai Disney Resort was closed this week for that very reason, but it’ll soon be back up and running!
LIFESTYLE・13 DAYS AGO

There are several great ways to watch the fireworks at Disney’s Magic Kingdom!. You can stake out a spot in front of the castle or hang back on Main Street, U.S.A. You could even try to time it just right so that they go off while you’re on a ride! In the past, dessert parties have been available at the park as well, and they’re coming back soon — including a new option at Disney’s Contemporary Resort.
RESTAURANTS・13 DAYS AGO
thekingdominsider.com

Here’s How You Could Win a Chance to Attend the Disney Imagination Campus 50 Teachers Celebration at Walt Disney World Resort!

Fall is right around the corner at Walt Disney World Resort! Even though EPCOT’s International Food and Wine Festival began mid-July (much earlier than years past) we’re still ready to eat and drink our way around the World Showcase as cooler weather moves in. EPCOT’s Food and Wine Festival lasts through November 20, 2021. If you’re looking for a new must-do experience however to change it up and move away from the Disney Park experience, you’ll want to make plans to attend another popular Food and Wine experience just minutes from EPCOT!
FOOD & DRINKS・14 DAYS AGO
6abc Action News

There are some magical details at [i]Walt Disney World[/i] hotels that may help to pick the place you want to call home on your next visit.
TRAVEL・10 DAYS AGO

Steakhouse 71, the replacement for The Wave… of American Flavors is set to open on October 1 at Disney’s Contemporary Resort. Today, Disney released concept art for the restaurant’s interior and revealed the menus. Reservations for the restaurant will open on September 16 through the Walt Disney World website. Steakhouse...
RESTAURANTS・14 DAYS AGO
WDW News Today

Tokyo Disney Resort is well-known for many things, but perhaps one of the more significant memories most guests have are of the delicious treats you can pick up! From perennial favorites like Gyoza Dogs to seasonal delights like popcorn soda, there’s always something special to try at the parks. And now, guests can bring home a bit of that magic with the Official Tokyo Disney Resort Cookbook, releasing September 22!
RECIPES・8 DAYS AGO
WDW News Today

This post may contain affiliate links; please read the disclosure for more information. The merchandise train never ends at Tokyo Disney Resort, and one recurring theme we’ve noticed is characters enjoying their day at the two parks, featuring beloved icons, attractions, and food. In the spring, we saw a full line of Nick & Judy merchandise with this theme, followed this month by ghosts. Now, Mickey and the Disney Friends will feature on a special merchandise line themed to the characters having a fun day at the parks!
SHOPPING・10 DAYS AGO
WDW News Today

Lightning Lane is making its presence known at the Disneyland Resort, with Fastpass kiosks already removed in both parks. Today, we noticed four big attractions in Disneyland have joined the procession of disappearing kiosks: Haunted Mansion, Splash Mountain, Big Thunder Mountain Railroad, and Indiana Jones Adventure. Soarin’ Around the World at Disney California Adventure also had its kiosks removed.
TRAVEL・11 DAYS AGO