Sandra Bullock’s Handsome Boyfriend Is the Reason Behind Her Smile! Get to Know Bryan Randall 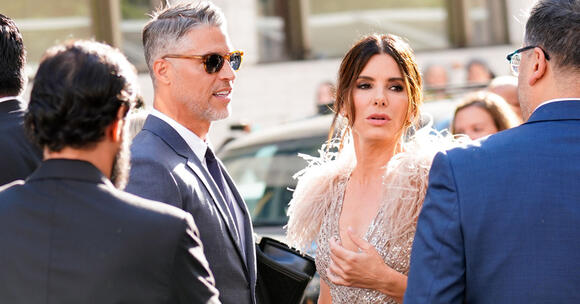 It’s no surprise the beaming smile across Sandra Bullock‘s face is thanks in part to her incredibly handsome boyfriend, Bryan Randall. Though the two have been dating for quite some time now, the Miss Congeniality star and the American photographer have kept much of their relationship out of the spotlight.

“They are best friends and partners,” a source told Closer about the duo in August 2020, adding Sandra is Bryan’s “greatest supporter.” The couple’s whirlwind romance first began in January 2015 when a friend recommended Bryan shoot photos of Sandra’s son Louis at his birthday party. After completely hitting it off, it wasn’t long before their relationship blossomed into a full-on romance.

The lovebirds enjoy going out for date nights and also having lazy days inside with the Bird Box star’s two kids, Louis and daughter Laila. “Sometimes, they sit back and laugh because they look at their lives and they feel like an old married couple,” another source told Closer in July 2019. “They’re set in their ways and content. The kids are healthy and happy. This is all she’s ever wanted … this is heaven for Sandra.”

Things have been going so great that the Gravity star is thinking about getting married again after her 2010 divorce to reality TV star Jesse James. But since she and her beau know they don’t need the marriage label to feel completely in love, they’ve been dragging their feet to the altar.

“They don’t talk about their relationship status that much, but it’s pretty clear what they have is a very special bond,” a third insider revealed to Closer in June 2019. “Bryan proudly wears a wedding band on his wedding finger.”

Because they rarely talk about their romance, some of Sandra and Bryan’s friends “swear” they secretly tied the knot. But in all actuality, they have yet to be engaged. Regardless, “Sandra and Bryan consider themselves a solid, committed, family unit,” the insider said. “There’s no doubt that he’s Louis and Laila’s dad.”

Scroll below to learn some facts you might not know about Sandra’s boyfriend, Bryan!

Sandra Bullock doesn't need a man to make her look good. Very classy women, always nice to have a man that makes you happy.

The last time Sandra Bullock worked with Netflix in “Bird Box” the film became a global phenomenon. Three years later they are hoping to have the same success with the upcoming film The Unforgivable, in theaters Nov. 24 and available to stream on Netflix December 10th. The streaming platform released the first look of the film on Wednesday with an image of Bullock as ex-convict “Ruth Slater.” The captivating photo shows a bare face hardened Bullock staring at herself in what looks like a prison mirror. “My character is someone who has been incarcerated for 20 years for a pretty heinous crime [and] gets out,” Sandra told Entertainment Weekly in an interview published Wednesday. Bullock explained, “There are several people whose lives she affected by this crime she committed, and there’s a lot of hatred and anger and bitterness and sorrow associated with her release.”
MOVIES・4 DAYS AGO
Closer Weekly

He’s the award-winning director behind classic films like A Beautiful Mind and Apollo 13, but Ron Howard deserves recognition for being the loving dad of his four kids. The Happy Days star shares his children, Bryce Dallas Howard, Paige Howard, Jocelyn Howard and Reed Howard, with his longtime wife, Cheryl Howard.
FAMILY RELATIONSHIPS・11 DAYS AGO
Closer Weekly

Melora Hardin’s Kids Are Her World! Get to Know the ‘Office’ Alum’s Daughters Rory and Piper

Thanks to her beautiful daughters, Melora Hardin couldn’t feel luckier to be the mom of two kids — Rory and Piper — with her husband, Gildart Jackson. The Office alum has made parenthood her No. 1 priority since welcoming her first child nearly two decades ago. Melora and Gildart started...
FAMILY RELATIONSHIPS・10 DAYS AGO
Daily Mirror

Amy Childs has lifted the lid on her new romance with First Dates star Billy Delbosq. The 31-year-old TOWIE star has only recently split with her ex-boyfriend Tim, but she has already enjoyed a string of dates with the Channel 4 star. The reality TV star was left heartbroken after...
CELEBRITIES・14 DAYS AGO

Sandra Bullock hasn’t been a regular presence on our screens for a while, with the Academy Award winner appearing in just three live-action movies in the last eight years and none at all since 2018, but she’s on her way back with a trio of exciting projects that couldn’t be more different from each other.
MOVIES・4 DAYS AGO
E! News

Hayley Mills was one of Hollywood's most famous child actors of the 1960s. She starred in some of the era's biggest films, including That Darn Cat! and The Parent Trap, which turned then-14-year-old Mills into a major star. It also should have given her a major payday, but as Mills recounts in her new memoir Forever Young, which comes out on Sept. 7, she was shocked to find herself nearly penniless at the age of 21, after starring in more than a dozen movies. Read on to find out how Mills, now 75, was nearly broke and about her decade-long fight to get her money back.
CELEBRITIES・22 DAYS AGO
Best Life

See Elizabeth Taylor's Lookalike Granddaughter, Who's Carrying on Her Legacy

One of the most popular actors of Hollywood's Golden Era, Elizabeth Taylor enjoyed a long and legendary career. Born in London to American parents, Taylor moved to Los Angeles as a child in 1939, and wasted no time before landing her big break just a few years later. As a teen, she became a household name by starring alongside Mickey Rooney in the popular 1944 film National Velvet. By the 1950s, she became one of the most popular sirens of the silver screen, and by the 1960s, an Academy Award winner and the highest paid movie star alive. Today, she is best remembered for her performances in Cleopatra, Cat on a Hot Tin Roof, and Who's Afraid of Virginia Woolf?
BEAUTY & FASHION・16 DAYS AGO

Watch: Kim Kardashian Reveals Which West Child Makes Mornings a "Struggle" Kim Kardashian is helping her fans to keep up with her kids' wildly different personalities. On Thursday, Sept. 16, the 40-year-old Keeping Up With the Kardashians alum is a guest on The Ellen DeGeneres Show. During the visit, Kim discussed the differences between the four children she shares with estranged husband Kanye West: North West, 8, Saint West, 5, Chicago West, 3, Psalm West, 2.
CELEBRITIES・11 DAYS AGO
womansday.com

Kaley Cuoco appears to be happy as can be with her husband of three years, Karl Cook. But even still, the actress hasn't forgotten about the time she dated her Big Bang Theory costar Johnny Galecki. While playing on-screen love birds Penny and Leonard on the series, The Flight Attendant...
CELEBRITIES・25 DAYS AGO
Best Life

12 New Movies You Can Watch on Netflix This Weekend

The best flicks to keep you entertained through Labor Day. Not only has the weekend arrived, but it's also a long weekend if you're lucky enough to have Labor Day off. That means you have one extra day to sit in front of your TV, kick your feet up, and watch movies. And because it's also the beginning of the month, Netflix has just added a plethora of brand-new movies to its catalog and some more that are new to the streaming service as of this week. We took at a look at all of those offerings to bring you this list of recommendations to fill up your holiday weekend. Read on to see what you should start streaming!
MOVIES・23 DAYS AGO
People

Ella Travolta was all smiles with her father John to celebrate the end of production for her first starring film role. Ella Travolta is leaving Wonderland. The 21-year-old actress celebrated the wrap of her new movie Get Lost, posting a collection of photos from the Alice in Wonderland-inspired film on Instagram Sunday.
MOVIES・20 DAYS AGO

The number one movie on Netflix's Top 10 Movies in the U.S. chart is surprisingly not a Netflix original. The spot is held by the 2012 thriller Safe House, starring Denzel Washington and Ryan Reynolds. The film also holds the number two slot on Netlfix's overall top 10 charts, just behind the British series Sex Education, which had its third season released on Friday.
MOVIES・8 DAYS AGO
DoYouRemember?

Whatever Happened To Lori Saunders From ‘Petticoat Junction’?

Bobbie Jo was originally played as a shy bookworm who enjoyed singing. Pat Woodell originated the role for seasons 1 and 2 but she left the Junction with hopes of reaching stardom via singing. The role was then taken over by actress Lori Saunders, and so the character changed a bit.
CELEBRITIES・26 DAYS AGO
Best Life

Olivia Newton-John is a four-time Grammy winning singer and songwriter, but you probably remember her best as Sandy from Grease. Born in England, raised in Australia, and catapulted to fame right here in the U.S, the actor became a Hollywood star overnight when the 1978 movie became a box office smash. Following her breakout performance, she appeared in Xanadu (1980) and Two of a Kind (1983), opposite her Grease co-star John Travolta. Ultimately, she focused on her music, releasing a string of chart-topping pop hits over the next several decades.
CELEBRITIES・8 DAYS AGO
Us Weekly

Sharon Osbourne opened up about her nearly 40-year marriage to Ozzy Osbourne, revealing they didn’t always get along as well as they do now. “Our fights were legendary,” the former Talk cohost, 68, told the Daily Mail in an interview published on Tuesday, September 14. “We would beat the s—t out of each other. It stopped maybe 20 years ago, but we had a good run.”
CELEBRITIES・11 DAYS AGO
wegotthiscovered.com

It’s hard to deny that Bruce Willis has been in some absolutely phenomenal films — Looper, Pulp Fiction, and Die Hard are certainly proof of that. Still, he’s been in quite a few movies that were critical flops as well. According to stats from FlixPatrol, one of his moves that has a measly 15% Tomatometer rating on Rotten Tomatoes is somehow one of the most popular films on the entirety of Netflix.
TV & VIDEOS・12 DAYS AGO
HipHopWired

Twitter & Bobby Brown Agree: ‘The Bodyguard’ Remake Is The Bad Movie Idea Nobody Asked For

A lot of people are done with all the remakes. Even the news of Bel-Air, the dramatic remake of the ’90s sitcom favorite, The Fresh Prince Of Bel-Air, has probably been met with just as much scorn as it has anticipation. It’s like every day there’s news of a new movie or TV show that […]
MOVIES・9 DAYS AGO
centralrecorder.com

Girl Catches Her Boyfriend Cheating With Her Roomate Through TikTok Video

The Ben Affleck renaissance has been ongoing for a decade now, and it’s marked an incredible turnaround for an actor that was fighting to remain relevant after a string of critical and commercial duds, while he was much more likely to be found on the front pages of the tabloids than the trades.
MOVIES・19 DAYS AGO