How lovebugs came to Florida, and it wasn't to eat mosquitoes 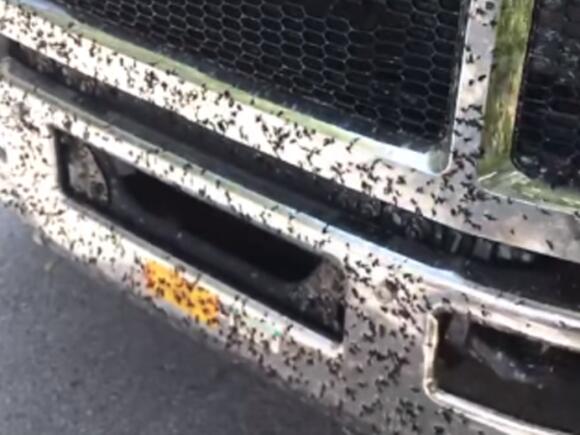 TAMPA, Fla. — They're on your car, on your house and landing on your windshield every time you stop — lovebug season is here.

They're harmless, usually found in pairs and so annoying most think a more fitting name would be "hate bugs."

RELATED: Lovebugs are invading Florida, this cleaning hack will keep their guts off your vehicle

So, how did they get here?

According to the Crowley Museum and Nature Center, lovebugs migrated to the U.S. from Central America in the 1920s and to Florida in the 1940s.

"Their reproduction has been successful for two reasons, first- not many predators are interested in eating them. Additionally, their larvae break down fallen and dead vegetation," the center wrote on Facebook.

Are they the product of an experiment?

A rumor that the bugs were created by the University of Florida as an experiment to control mosquitoes has persisted for years. That's not true.

"If science had advanced to a level of being able to completely create an organism that successfully feeds and reproduces, do you really think it would be a lovebug?" the center wrote.

Lovebugs don't even eat mosquitoes! They feed on nectar from flowers like other pollinators, actually benefiting the environment, according to the post.

Where do they go?

After mating for two to three days, female lovebugs lay their eggs and die, according to the University of Florida.

They lay their eggs on decaying material found on the ground. They hatch after two to four days, and feed on the material around them.

Why are they called lovebugs?

Lovebugs are often seen in pairs or "stuck" together because they're mating. An adult love bug only lives for three to fours days, and those days are mostly filled with mating.

Unfortunately, lovebugs are here to stay. May marks mating season for the nuisance bugs, and it lasts four weeks. Then, they do it again in September.

Lovebugs are always around, they are just a lot more prevalent during their mating season. They're active between 10 a.m. and 6 p.m. and they love (no pun intended) temperatures above 84 degrees.

I dont care where they come from they are gross I work outside and it's just horrible to have to fight these damm things all day long. they get in your hair and anywhere else they wanna land... they really need to do something about getting rid of these nasty pain in the ass useless bugs they serve no purpose at all

Yep the female love bug just drags the male around by his you know what until he dies. Just like real life😏😂

Brides across Tampa Bay are accusing a local florist of charging thousands of dollars for flowers that never made it to the wedding.
1 DAY AGO
ABC Action News WFTS

A state senator representing portions of Broward and Palm Beach counties says she hopes that Gov. Ron DeSantis will reconsider his appointment of Dr. Joseph Ladapo as surgeon general after he refused to wear a mask in her office.
FLORIDA STATE・1 DAY AGO
ABC Action News WFTS

FAA: Tampa has the 2nd most laser strikes in the US

There have been 458 laser strikes in Florida this year and 56 in Tampa alone — the second-highest city nationwide to report laser strikes according to the Federal Aviation Administration. O’Harra says nearly half of the 56 were aimed at aircraft below 3000 feet.
8 HOURS AGO
ABC Action News WFTS

It’s a daily frustration for Maria Castillo when she walks her kids to MacFarlane Park Elementary School. “I will literally honk my horn every single day to call the attention to the person that is either texting or about to speed again through that same crosswalk," said Castillo, who's the President of the MacFarlane Park Neighborhood Association.
FLORIDA STATE・18 HOURS AGO

A Tampa Bay family hoped to turn their backyard into an oasis complete with an outdoor kitchen. In this case, paying well in advance proved to be a problem. COVID delayed construction, and three years later they were told the unit they paid for was gone.
LIFESTYLE・8 HOURS AGO
ABC Action News WFTS

A Tampa Bay area organization is taking action to help Afghans who are still in limbo in the war torn country.
22 HOURS AGO
ABC Action News WFTS

Doctors share advice on talking to kids about COVID vaccine

Within weeks, health experts expect younger children could be able to get the COVID-19 vaccine. While parents wait for that to happen, they might also wonder how to talk to their kids about getting the shot.
1 DAY AGO

Midwest Food Bank Florida opened a warehouse in Polk County in 2020 and saw its distribution numbers go up more than 130%.
1 DAY AGO
ABC Action News WFTS

The non-profit organization Experienced Autism Alliance is doing what it can to help limit the time a person is missing.
RIVERVIEW, FL・4 DAYS AGO
ABC Action News WFTS

Drive down to the end of East Circle Street in Avon Park and you'll find Maxwell Groves. It's the last standing citrus packing house in Highlands County.
HIGHLANDS COUNTY, FL・4 DAYS AGO

Lost Mines of Atlantis is a fun roadside attraction

The Lost Mines of Atlantis in Sebring is a roadside attraction fun for the whole family.
ATLANTIS, FL・5 DAYS AGO
ABC Action News WFTS

Doctors look at impact of COVID on immunodeficient children

Doctors in the Tampa Bay area are trying to get a better understanding on how COVID-19 impacts kids with immune deficiencies.
KIDS・5 DAYS AGO
ABC Action News WFTS

It’s a simple screening that could save your life: a mammogram. Doctors and breast cancer awareness advocates in the Tampa Bay area are reminding people even during the pandemic, you still need to get your regular screening.
TAMPA, FL・4 DAYS AGO
ABC Action News WFTS

A Pasco County community is honoring the life of a teacher they lost to COVID-19 complications last year, with a pumpkin patch, and all the proceeds are going back to the profession she loved so much.
PASCO COUNTY, FL・3 DAYS AGO
ABC Action News WFTS

“I think that anytime you can give back to the community you have a deep feeling of satisfaction and connection to those you serve and those you serve with,” said Rebekah Jarvis
CHARITIES・4 DAYS AGO
ABC Action News WFTS

For the last five years, a local man has been volunteering at CASA Pinellas and taking on the role of being everyone's grandpa.
PINELLAS COUNTY, FL・5 DAYS AGO
ABC Action News WFTS

Florida Fish and Wildlife is out with a new red tide map as we head into the weekend.
FLORIDA STATE・4 DAYS AGO