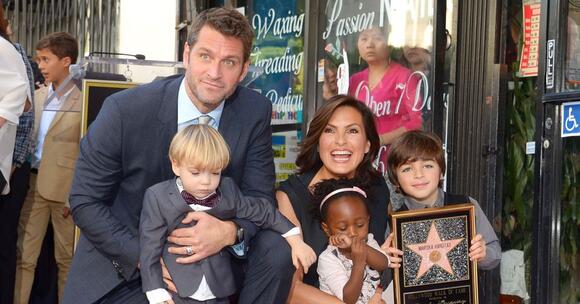 Mariska Hargitay is the daughter of Hollywood royalty, a successful actress and an impassioned activist, but her most important role is being a mom to her three kids. Alongside her husband, Peter Hermann, the Law & Order: Special Victims Unit star is raising her beloved children: August, Amaya and Andrew.

When it comes to being a mom, Mariska can’t help but feel like the luckiest lady on earth. “Our family is so perfect, or at least perfect for me,” she gushed to People in 2018. “Together we’re just this whole, happy, joyful, chaotic, crazy unit. I’ve never known anything that was more right.”

Aside from making beautiful memories with her little ones over the years, the Jocks alum is grateful to have learned so much from her children. “The thing that’s made me a better parent is my kids. Because they taught me to really listen,” Mariska marveled, crediting Peter for being her biggest supporter.

“My husband is my North Star, and my kids are my teachers,” she continued. “Peter and I, we’re so different that it’s been amazing how we complement each other. He knows everything I don’t.”

Mariska is especially thankful to have Peter by her side as she’s juggled motherhood and her long-running role on SVU for the past two decades. Though the California native is proud to be a working mom, Mariska knows it’s sometimes difficult to balance all her responsibilities.

“I get jealous that other people get to take August to school and pick him up. It’s hard for me to go to his school and not know all the parents,” she once said to Momtastic. “They all know one another and it’s a community. I can’t always be a part of that.”

Because Mariska knows “you can’t have everything,” she’s making sure to relish what she already has. “I’m learning to be present with where I am,” she exclusively told Closer in June 2018. “I look at my life now and think, I’m on a TV show, I run a foundation, I run a household, I’m a mom, I’m a wife, I’m a lot of things. The truth is we have to live the journey, right? And that’s what I’ve learned.”

To find out more details on Mariska and Peter’s three kids, keep scrolling!

Sally Field has been on our screens for more than five decades, but while she’s been very busy with her career, she’s also focused on her personal life. Throughout the years, she’s been married twice and also had a long-term relationship with Burt Reynolds. The Mrs. Doubtfire actress exchanged vows...
CELEBRITIES・24 DAYS AGO
Closer Weekly

Sally Field has traveled the world as a Hollywood star, but nothing brings her as much joy as the time she spends with her three kids. The Smokey and the Bandit actress is the proud mother of her “loving” sons, Peter Craig, Eli Craig and Sam Greisman. Sally first experienced...
FAMILY RELATIONSHIPS・27 DAYS AGO
Closer Weekly

Bob Barker’s Late Wife Dorothy Jo Gideon Meant the World to Him! Get to Know the TV Star’s Spouse

He graced our small screens for decades as the host of The Price Is Right, but when Bob Barker wasn’t handing out prizes to contestants on the hit game show, he was spending time with his late wife, Dorothy Jo Gideon. The couple made tons of incredible memories together throughout their 36-year marriage.
RELATIONSHIPS・26 DAYS AGO
Hello Magazine

Nicole Kidman rarely talks about her relationship with her oldest daughter, Bella, but it looks like the star has the seal of approval from her offspring. In a rare public exchange, Bella showed support for her mother as she shared an exciting moment on Instagram recently. Nicole posted a snapshot...
CELEBRITIES・29 DAYS AGO

Ron Howard Is Always Gushing About His 4 Kids! Check Out His Sweetest Quotes About Being a Dad

Director Ron Howard is the epitome of a Hollywood success story. Growing up in the spotlight as a child actor on The Andy Griffith Show prepared him for a lifetime of directing blockbuster films. Through all of the fame, his biggest pride in life is raising four children, Bryce Dallas Howard, Paige Howard, Jocelyn Howard and Reed Howard with his wife, Cheryl Howard.
FAMILY RELATIONSHIPS・18 DAYS AGO
Closer Weekly

Eve and her husband, Maximillion Cooper, have been making our hearts weep with joy ever since they tied the knot in 2014. The Talk alum’s romance with the British millionaire started years before, however, and their cutest photos together prove they’re still happier than ever. Eve and Max first crossed...
RELATIONSHIPS・25 DAYS AGO
Closer Weekly

Jack Osbourne Is a Hardworking Dad of 3! Meet His Adorable Daughters with Ex-Wife Lisa Stelly

Jack Osbourne grew up in the spotlight as the son of one of the most famous rockstars in the entire world, Ozzy Osbourne. The reality star has an adorable family of his own with ex-wife Lisa Stelly. His three daughters, Pearl, Andy and Minnie, are the light of his life. The girls have even joined him on the road while filming his History Channel reality series, Ozzy & Jack’s World Detour.
FAMILY RELATIONSHIPS・27 DAYS AGO
Closer Weekly

’s tremendous acting career has spanned more than six decades. The Singin’ in the Rain star has worked with every top-name in Hollywood and created a huge legacy with her work in blockbuster musicals. But, nothing makes her prouder than being a mom to her daughter, Fernanda Luisa Gordon, and spending time with her grandkids.
CELEBRITIES・3 DAYS AGO

Musician Phil Collins Is a Father of 5! Meet His Children Who Are Taking Over Hollywood

Musician Phil Collins is the mastermind behind some of the biggest radio hits that have taken over the airwaves since 1970. The Genesis drummer has had both a huge career with his band and an equally successful solo career full of award-winning work. His five children, Joely, Simon, Lily, Nicholas and Matthew, are equally as talented and have started to take over Hollywood.
FAMILY RELATIONSHIPS・5 DAYS AGO
Page Six

Mariska Hargitay has laid down the law — all while stealthily avoiding one of those cringe-worthy “don’t you know who I am?!” moments. As if “Law & Order: Special Victims Unit” star wasn’t badass enough: A now-viral video captured the Emmy-winning actress springing into action to save a shoot from a disruptive singing man on Tuesday. A clip of the confrontation amassed more than 42,000 views as of Thursday morning.
NEW YORK CITY, NY・3 DAYS AGO
Outsider.com

On Saturday (November 27th), Law & Order: SVU star Mariska Hargitay shared on Instagram some wholesome photos from a beach trip with her husband, Peter Hermann. “Grateful for this guy and this crazy beautiful day,” the Law & Order: SVU starlet declared. She also “Counting My Blessings” and “cozy” as hashtags.
CELEBRITIES・8 DAYS AGO
Closer Weekly

Mom of three Christie Brinkley adores any amount of time she gets to spend with her kids, Sailor Brinkley-Cook, Alexa Ray Joel and Jack Cook. Being a mom is her greatest achievement yet and she never fails at giving good advice to her children whenever they need it. “She’s mostly...
FAMILY RELATIONSHIPS・6 DAYS AGO

From growing up a California rich girl to making waves in the teen soap airwaves, Tori Spelling has made a name for herself. Find out more here about her parents, Aaron and Candy Spelling, and how they shaped her life and experience in show business. Actress Tori Spelling, 48, had...
BEVERLY HILLS, CA・6 DAYS AGO
Best Life

Anyone who watched Family Ties during its seven-season run in the 1980s will remember the four kids of the Keaton family. Young Republican brother Alex was played by Michael J. Fox. Fashion-loving teen Mallory was portrayed by Justine Bateman. The role of youngest sibling Andy—a new addition in season 3—went to Brian Bonsall. And then there was sister Jennifer, who loved sports and who actually shared her parents' liberal political opinions, unlike her siblings. Jennifer was played by Tina Yothers, who started Family Ties as a nine-year-old and is now 48.
TV SERIES・12 DAYS AGO
Variety

In a video circulating on social media this week, “Law & Order: SVU” star and executive producer Mariska Hargitay  leapt into action to help get a shoot in New York City back on track. In the video, she respectfully asks a man  to stop singing and interrupting a shoot in in Washington Square Park, telling him: “Your singing was beautiful, but we’re just trying to get the shot. Is it okay if you don’t sing when we say ‘action’?”  According to the Twitter user who posted the video, a passerby in the park had been singing loudly to intentionally disrupt the...
NEW YORK CITY, NY・4 DAYS AGO
Closer Weekly

Yellowstone star Kevin Costner is one of Hollywood’s top actors. When he is not dominating his Paramount network drama series, the father of seven is a major family man. He and his second wife, Christine Baumgartner, are proud parents that love spending time with their adorable blended family. “My life,...
FAMILY RELATIONSHIPS・20 DAYS AGO

Law & Order: Special Victims Unit star Mariska Hargitay has sparked a huge reaction from fans with her latest post. Taking to Instagram this week, the 57-year-old actress teased that fans of the hit police procedural are in for an extra special treat this holiday season - a Christmas episode!
CELEBRITIES・3 DAYS AGO
Closer Weekly

Stanley Tucci Loves Being a Dad of 5! See the Actor’s Most Touching Quotes About Fatherhood

Stanley Tucci has had tons of breakout roles in blockbuster films that helped him become one of the most in-demand actors in Hollywood. In addition to starring alongside big names like Meryl Streep and Jennifer Lawrence, Stanley takes pride in being a father to his five children. The Easy A actor is always sharing love for his blended family with his wife, Felicity Blunt.
FAMILY RELATIONSHIPS・6 DAYS AGO
Outsider.com

On Saturday (December 4th), Law & Order: SVU star Mariska Hargitay took to her Instagram account to surprise her fans with a video of upcoming guest stars of the hit series. “Saturday night at SVU,” the Law & Order icon declared in her post. She is seen hugging various guest stars, including Donald Logue, Terry Serpico, and Jason Biggs.
TV & VIDEOS・1 DAY AGO
Closer Weekly

The late Jerry Douglas not only left behind a lasting legacy as a soap opera star, he is survived by three children, all of whom have gone on to have incredible success through the years. Jerry was first married to late actress Arlene Martel, best known for roles in The...
FAMILY RELATIONSHIPS・24 DAYS AGO