Paul McCartney brought James Corden to tears with the story behind 'Let It Be.'

This article originally appeared on 06.22.18

Imagine you're sitting in a pub and Sir Paul McCartney walks in.

That's exactly what happened when he guested on an episode of "Carpool Karaoke." The legendary performer rolled through his hometown of Liverpool with host James Corden, sharing memories of the city, surprising fans in his favorite pub, and bringing all of us a badly needed emotional release with his music.

McCartney's trip down Penny Lane was poignant, and his message of positivity brought James Corden to tears.

The most prevailing themes in The Beatles' music are those of love, peace, joy, and togetherness. It's the kind of music that you put on during the happiest times and when you've had a really rough day.

One of the most comforting songs in difficult times is "Let It Be," and that's no accident. During their road trip, McCartney told Corden it was inspired by a dream of his late mother.

"My mum, who died, came to me in the dream and was reassuring me, saying it's gonna be OK, let it be." McCartney said. "I wrote the song 'Let It Be,' but it was [inspired by] her positivity."

"It got me emotional there, Paul," Corden said, echoing the feelings of everyone watching.

"That's the power of music," McCartney replied. "It's weird, isn't it, how that can do that to you?" 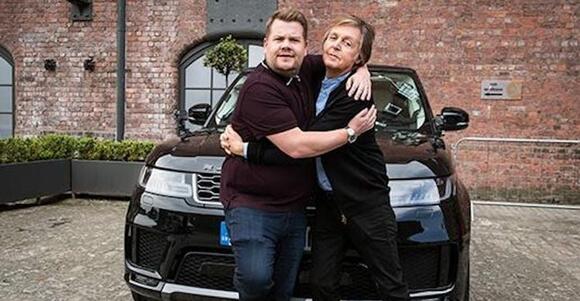 McCartney's reminder that things will be OK is something we all need.

"All you need is love" might sound a little sappy, but in these times, that message is more important than ever. And the Beatles' continued success is a testament to how much we all need to work toward the joy the group so often sang about. To achieve it, we've all got to come together (right now) .

Watch the full video below, free your tears, feel the full spectrum of your emotions, and then get to work making the world the awesome place we all know it can be. (The story starts at 4:50.)

We went to Russia on a school trip. Back in the day day St Petersburg was Leningrad and we visited a school over there and that is the song we sang to them.

My husband and I went to a concert he did in Charlottesville,Virginia. We laughed cried and sang.

Prince Harry will allegedly replace James Corden as the host of the Late Late Show, but only for one night. In its Jan. 17 issue, Star claimed that Prince Harry is the obvious choice to replace Corden temporarily because they are friends and both men are also from the United Kingdom.
CELEBRITIES・9 DAYS AGO
Chicot County News

Sir Paul McCartney was left "very sad" following the death of Janice Long. The Beatles singer has paid tribute to the veteran broadcaster - who was the first woman to regularly host 'Top of the Pops' - after she passed away at her home on Christmas Day (25.12.21) aged 66 following a short illness.
CELEBRITIES・13 DAYS AGO
Ultimate Classic Rock

Keith Richards, Paul McCartney and Joni Mitchell were announced as contributors to this year’s MusiCares charity auction, which takes place on Jan. 30. Rolling Stones guitarist Richards has signed a guitar with an eco-friendly NFT in the form of a video confirming his signature is genuine. Beatles icon McCartney has offered a signed bass, while Mitchell – who will be honored as MusiCares Person of the Year 2022 – will present the artist’s proof print of her oil painting of Jimi Hendrix.
MUSIC・7 DAYS AGO
advocatemag.com

It was 42 years ago Sunday (January 16th, 1980) that Paul McCartney was arrested in Tokyo, Japan for bringing 7.7 ounces of marijuana into the country. Fans were stunned at McCartney's action seeing as how he had lobbied so hard to be granted a work visa to perform in Japan after Wings was turned away in 1975 due to his previous drug busts. McCartney made no effort to conceal the large plastic bag of pot; instead he simply placed it among his clothes in his suitcase.
WORLD・7 DAYS AGO
TheDailyBeast

Two days after his late-night time slot rival Seth Meyers announced he was taking the rest of the week off following a positive COVID-19 test, James Corden told fans that he too was putting his show on a temporary hiatus after catching the virus. “I’m fully vaccinated, boosted and because of this am feeling fortunate enough to say I feel completely fine,” he wrote. Jimmy Kimmel and Trevor Noah both decided to take the first week of January off, and Jimmy Fallon revealed that he tested positive over the holidays, though he recovered in time to return to The Tonight Show. Earlier this week, The Late Show host Stephen Colbert told his audience that if he ends up testing positive, he will not return to his remote studio. “I want you to know that I love doing the show. It’s a privilege to do this show, and if I do get it, I promise you, I will not be doing my show,” he said from the stage of the Ed Sullivan Theater. “I will not be doing the show because I’m never going back into that storage closet where we did the show for 10 months.”
PUBLIC HEALTH・14 DAYS AGO
Kingsport Times-News

James Corden has tested positive for COVID-19. The ‘Late Late Show with James Corden’ host is fully vaccinated and currently feels “completely fine”, but is adhering to self-isolation guidelines and will be taking a break from his talk show for the “next few days”.
PUBLIC HEALTH・14 DAYS AGO
KRMG

Paul McCartney's "The Lyrics": A talk with editor/poet Paul Muldoon

Rolling Stone Magazine called Paul McCartney's"Yesterday" “the best song of the 20th century.” It’s been covered and recorded by thousands of artists, and it is universally loved. Paul McCartney wrote it in 1965, when he was 23 and in the middle of his stint with The Beatles....
MUSIC・13 DAYS AGO
vermilioncountyfirst.com

GOLDEN GLOBES WILL NOT STREAM: The Hollywood Foreign Press Association has decided not to livestream the Golden Globe Awards on Sunday (Jan. 9th). A spokesperson for HFPA told Deadline Thursday (Jan. 6th), “This year’s event is going to be a private event and will not be livestreamed. We will be providing real-time updates on winners on the Golden Globes website and our social media.”
CELEBRITIES・14 DAYS AGO
The Citizens Voice

James Corden has joined the growing list of celebrities, and late night TV hosts, with breakthrough COVID-19 cases. The “Late Late Show” host revealed on Instragram that he had the virus. “I just tested positive for Covid 19,” wrote Corden, 43. “I’m fully vaccinated, boosted and because of...
PUBLIC HEALTH・8 DAYS AGO
940wfaw.com

Paul McCartney has just uploaded a new 10-song Spotify playlist on his official PaulMcCartney.com site. Every month “Macca” posts a new tracklisting with a specific theme and to kick-off the New Year, he's has selected alternate versions of hits, collaborations, and deep album cuts. Among the tracks picked...
MUSIC・2 DAYS AGO

“The McCartney Years,” a period-true live concert featuring the music of Paul McCartney spanning two decades from The Beatles to Wings, takes to the stage at the Pullo Family Performing Arts Center (The Pullo Center) at Penn State York, at 7:30 p.m. Friday, Feb. 4. Tickets are on sale...
MUSIC・2 DAYS AGO
East Oregonian

Growing up, I had never given the Beatles much thought. Like all good children being raised in corporate America, I had a tangential knowledge by way of advertisements. Nike and “Revolution.” “Come Together” and luxury vehicles. The songs were clipped and snipped and ready to sell...
MUSIC・2 DAYS AGO
Guitar World Magazine

Was there ever been a musician as closely associated with an instrument as Paul McCartney and his Höfner bass? You see a picture of McCartney, and you aren’t at all surprised to see him holding the Höfner... it’s almost as if he was born with it.
MUSIC・8 DAYS AGO
Closer Weekly

Dick Van Dyke, 96, and Wife Arlene, 50, Have Been Married for a Decade: Learn More About Her!

For the majority of his time in the limelight, Dick Van Dyke was married to Margie Willet. However, the pair split in 1984 after 36 years of marriage. Later, in 2012, the actor moved on with his now wife Arlene Silver. To learn more about Arlene and her marriage to Dick, keep reading.
CELEBRITIES・9 DAYS AGO
The Independent

A woman has thanked one of her fellow gym members for not staring at her as she does squats, and she is sparking a debate on social media for doing so.In a TikTok video posted on 1 January, @libbychristensen was squatting on an exercise machine, as a man was sitting on a bench behind her. @libbychristensen ty for your service kind sir #gymtok #girlwholift #YerAWizard ♬ The Golden Girls - The Main Title Theme - TV Themes “I just need to shout out this man who was behind me while it was hack squatting bc I...
WORKOUTS・19 HOURS AGO
The US Sun

HANNIBAL Rising star Gaspard Ulliel has died after suffering a serious head injury in a horror skiing accident in the Alps. The 37-year-old model and actor was rushed to hospital in a serious condition after the incident in the La Rosière ski resort in the Savoie region on Tuesday.
CELEBRITIES・1 DAY AGO
Bossip

T.I says "Nobody F*ckin With Me" on the mic even mentions Kanye West, Jay-Z, Lil Wayne, and Nas. Social Media quickly brings out the receipts to remind him he's been smoked on tracks before.
MUSIC・2 DAYS AGO