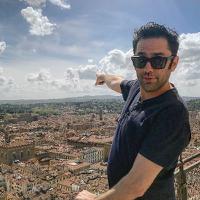 Paul Feinstein has been writing and editing in Los Angeles and around the world for more than 20 years. He has written travel guides to LA, Bangkok, Tokyo, Florence, and Barcelona and has written for myriad publications and media companies including Travel + Leisure, Fodor’s Travel, La Cucina Italiana, Departures, Lonely Planet, Fine Dining Lovers, MyRecipes, Time Out, Culture Trip, TBS, FOX, Disney, Stacker, and NBC/Universal. An avid traveler, Paul has been to more than 55 countries, lived in Israel, and is particularly obsessed with Italy and Japan.

Anyone who has been following the news understands that June 15th in Los Angeles is an incredibly important date. As of that day, LA, along with the entire state of California will be removing nearly every restriction when it comes to Covid. Physical distancing – out. Capacity limits – gone. Mask requirements – loosened.

That means restaurants are back to normal, bars and clubs will be hopping, and most-importantly, events will begin anew.

On the heels of LA’s reopening and laxed Covid restrictions is one of the most exciting art exhibitions to come to LA in a very long time. Opening on June 16, 2021, at NeueHouse in Hollywood is Andy Warhol: Photo Factory, a never-before-exhibited collection of rare Warhol photographs.

The exhibit features 120 images, many of which have never been seen before and include polaroid collages, 16mm film screen tests, unique gelatin silver prints, and Polaroids of Warhol’s many famous friends.

“I began collecting these photographs after learning about the camera’s seminal influence within Warhol’s body of work. This exhibition provides a scintillating introspective, especially as I consider these lesser-known stitched photos as an extension of Warhol’s raw self, one that the public has scarcely seen. Virtually every painting, print, and most works on paper began their life as a photo study. The fact is, Warhol used a camera as part of his daily social interactions over the course of four decades, it was integral to his interactions and his art-making process,” said James R. Hedges IV, owner of the rare prints and head of the Hedges Projects.

Strolling through the red- and pink-tinged gallery, visitors will be challenged, shocked, and awed at Warhol’s unique perspectives, celebrity companions, and exhibitionist confidantes. Some of the ultra-rare images on display include portraits of Kareem Abdul-Jabbar, Grace Jones, Jane Fonda, Liberace, John McEnroe, Jean-Michel Basquiat, and many more.

One of the true highlights of the exhibit is a series of stitched photographs, in which Warhol physically sewed prints together in his classic repetitive patterns. In addition to the stitched prints, there are four films streaming throughout the exhibit that feature hyper-intimate, black-and-white screen tests of Lou Reed, Edie Sedgwick, and others.

“This exhibition was created to underscore who Warhol was as a person, an artist, and an experimenter through his photography, and to delve into the stories and subjects behind the surface of his iconic images - beyond those instant moments,” says Fotografiska Exhibitions Manager Grace Noh.

The exhibition begins a world-wide tour in Los Angeles and will be open to the public for 40 days. The collection is curated and produced by international photography museum Fotografiska, the Hedges Projects, and the Jack Shainman Gallery. After debuting in Hollywood, the collection will begin its journey around the world with stops in New York, Stockholm, and even Tallinn, Estonia.

Tickets for the exhibition can be found here and cost $21. Viewings are open to the public starting on June 16th and run from 10am-7pm, Wednesdays, Thursdays, and Fridays. As of writing, tickets are available for all open dates.

If you want to be challenged, astonished, flustered, and mystified, Warhol brings it all. And if you just want to embark on a public event, and experience a post-covid world, this is an exhibition that will help you celebrate life, ponder the extraordinary, and get your own creative juices flowing once again.

Paul Feinstein has been writing and editing in Los Angeles and around the world for more than 20 years. He has written travel guides to LA, Bangkok, Tokyo, Florence, and Barcelona and has written for myriad publications and media companies including Travel + Leisure, Fodor’s Travel, La Cucina Italiana, Departures, Lonely Planet, Fine Dining Lovers, MyRecipes, Time Out, Culture Trip, TBS, FOX, Disney, Stacker, and NBC/Universal. An avid traveler, Paul has been to more than 55 countries, lived in Israel, and is particularly obsessed with Italy and Japan.

If you want to understand the history of Los Angeles through its roads, the place to start is undoubtedly Santa Monica Boulevard. The historic street, which extends from Silver Lake on the east side of the city all the way to the Pacific Ocean, also intersects with the famed Route 66.
Read full story
Los Angeles, CA9d

Want To Cool Off This Summer? Find A Hotel Pool Near You.

You no longer have to stay overnight to access the best hotel pools in Los Angeles. Now that climate change has made summer in Los Angeles an insufferable six-month-long inferno, it’s never been more important to know how to cool off.
Read full story
2 comments
California State16d

Are the Channel Islands Southern California's Most Overlooked Getaway?

Escape to an island paradise off the shores of Los Angeles. Did you know that there are only two National Parks in all of Southern California? The most well-known and highly trafficked, of course, is Joshua Tree National Park, which sits east of Palm Springs about two and a half hours outside of Los Angeles. The second, is a little harder to reach, very much overlooked, and mostly an afterthought for adventure-seeking Angeleno’s and tourists. That Park is the Channel Islands National Park, resting peacefully in the Pacific Ocean off the west coast of Oxnard – and it should not be dismissed.
Read full story
25 comments
Beverly Hills, CA24d

The team behind SUGARFISH has found the Nirvana of meat. Whenever a new restaurant opens in Beverly Hills, there is the typical fanfare. Celebrity sightings, dolled-up influencers, glitzy customers, effusive press, social media onslaughts, and all the trappings of a movie premiere with FOMO dripping from the walls. But once you strip away the gloss and the hype-machine that the LA restaurant scene is mostly based on, you’re left with something much simpler to ponder: how is the food, how is the service, is it worth it?
Read full story
Los Angeles, CA2021-06-29

These Los Angeles Chefs Have a Secret Ingredient

There’s a little-known culinary secret running around certain circles of Los Angeles. The secret is about a foreign land that boasts the cleanest air and the most fertile soil on earth. It’s a place that’s completely GMO free, has the strictest biosecurity controls, and irrigation systems that complement a gross of natural rainfall.
Read full story
Los Angeles, CA2021-06-24

The Los Angeles culinary scene has a discrimination problem. Yes, of course there are inequities when it comes to race and gender, but another problem might just be geographic. It’s perhaps the only reason that the beam of light that is Sandra Cordero, the owner and executive chef of Gasolina in Woodland Hills, is often eschewed for the comfier, more centric confines of restaurants in LA proper.
Read full story
1 comments
Los Angeles, CA2021-06-14

Tom Cruise on the Hollywood Walk of FameCredit: Marisa Lynch. On any given day you can meander past the Walk of Fame stars of Tom Cruise or Bruce Lee while costumed performers dressed as Elmo or Elvis or Darth Vader take pics with tourists for a dollar. The dichotomy can be striking when a red-carpet movie premiere is juxtaposed against a homeless encampment. But Hollywood Boulevard, warts and all, is one of the beating hearts of LA and if you want to find stereotypes mixed with history and authenticity, there’s no better place to stroll.
Read full story
2 comments
California State2021-06-07

Can you expect pre-Covid experiences at California hotels?

The Colony Palms Hotel and BungalowsCredit: Marisa Lynch. With summer right around the corner and Covid levels dropping precipitously in the state of California, travelers are gearing up to get out of the house and experience a vacation for the first time in nearly two years.
Read full story
Los Angeles, CA2021-05-31

Liv a Lil - The Cultural Food Collab We All Need

It often feels like our world has never been more polarized. Every day, Twitter and other social platforms explode with vitriol, hate, misinformation, and disinformation. Every issue is debated to its most extreme degree, whether it’s cancel-culture, geo-political conflicts, gun rights, or cultural appropriation.
Read full story
Los Angeles, CA2021-05-26

The pandemic has brought a lot of changes to behavior over the past year. How people socialized, traveled, ate, and drank was fundamentally altered as groups huddled indoors looking for indulgences.
Read full story
Los Angeles, CA2021-05-18

The Grove Opens Bistro 1759, a New, Fancy Dining Experience on Top of a Trolley

The Los Angeles restaurant scene is re-opening with a bang, and the latest, possibly most lavish, and tastiest new opening might come with a side of motion sickness (but not really).
Read full story
2 comments
Los Angeles, CA2021-05-14

Los Angeles is a donut town. And despite all the diet fads, health crazes, workout classes, and Peloton rides, there are still dozens of donut shops littering every part of the city. It may not be you, but someone is eating all these sweets…
Read full story
1 comments
Los Angeles, CA2021-05-12

This is the Meatless Meatball Sandwich...

...and it is spectacular. Bianco Truffle Meatball SandwichCredit: Anne Fishbein. Anyone who has lived in Los Angeles for more than 10 years can tell you that the restaurant scene in the city has morphed and changed into one of the finest culinary destinations on the planet. LA’s ethnic enclaves produce some of the best Mexican, Japanese, Thai, Italian, and Chinese food restaurants in the world.
Read full story
5 comments
Los Angeles, CA2021-05-10

Los Angeles is a city of makers, of creators, and of doers. It’s the kind of place where a simple idea can spread like wildfire and a cult following can form overnight. It’s a city where hype can blaze an enormous path, but where quality ultimately rises to the top.
Read full story
1 comments
Los Angeles, CA2021-04-26

The to-go hit of the pandemic is here to stay. If you can find a silver lining in a pandemic, it’s easily the entrepreneurship and ingenuity of LA’s restaurant community. Forced with shutdowns and re-openings and half openings and quarter openings, LA’s restaurateurs needed to get creative.
Read full story
Los Angeles, CA2021-04-23

For as long as chefs have been firing up pizzas in Los Angeles, not-so-humble pizzerias have deigned to provide skeptical Angelenos with classic New York style slices. Pretty much all have failed. Sure, there are close calls with the likes of Vito’s or Mulberry Street or even more recent New York transplants Joe’s and Prince Street. But somehow, the nostalgia is missing from all of them.
Read full story
4 comments