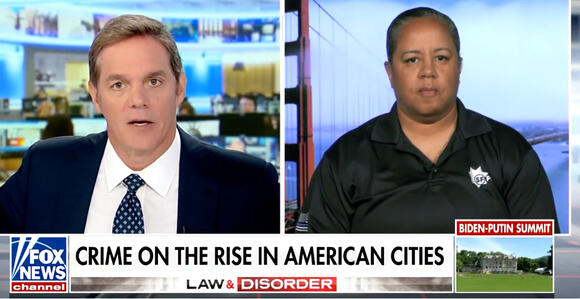 The union representing San Francisco’s Police Officers blamed a “criminals first agenda” by the city’s embattled District Attorney for an alarming spike in the number of Walgreens, CVS, and supermarkets being looted out of business.

The most recent “grab-and-run” retail theft happened at a Walgreens store at Gough and Fell St. on Monday, June 14. A shopper shared a video of the brazen theft, which has since gone viral and drawn international scrutiny about San Francisco’s major crime problem.

“What happened in that Walgreens has been going on in the city for quite a while,” San Francisco Police Officers’ Association Vice President Lt. Tracy McCray said of the shocking theft during an interview on FOX. “I'm used to it. I mean, we can have a greatest hits compilation of people just walking in and cleaning out the store shelves and security guards the people who work there standing by helplessly because they can't do anything.”

Walgreens has closed 17 of its stores in San Francisco in the last five years because of unchecked and repeated “grab-and-run” thefts. The pharmacy chain spends 35 times more on security at its San Francisco stores than its locations across the country.

Walgreens notes 14 of its top 20 stores for security calls nationwide are in San Francisco. Being employed at a San Francisco Walgreens is also dangerous, with employees being subjected to threats 30 times above the chain’s average.

“San Francisco is the epicenter of organized retail crime in the country,” Brendan Dugan, CVS Pharmacy’s director of Organized Retail Crime and Corporate Investigations told a Board of Supervisors committee on May 13.

“What is happening in San Francisco?” The FOX anchor asked Lt. McCray during the interview.

“What you have is obviously crooks knowing that they can just go in because there are no consequences,” she replied. “There are not enough cops out. You try to put a cop at every corner, which is unrealistic. And it’s just the ‘criminals first agenda from the District Attorney because he's not prosecuting any of those crimes as felonies or as a commercial burglary.”

San Francisco’s District Attorney Chesa Boudin and his progressive prosecution tactics have been heavily criticized by the POA and other residents for not taking a harder stance against criminal offenses in his city.

“This is gonna get slapped down to a misdemeanor, and as said before, if you still [steal] below $950, you get a citation and you just get to walk away,” Lt. McCray said. “And if you don't show up for court, guess what, maybe you get a bench warrant or maybe they even tossed out before it even gets to that point. So this is really, anybody could come in and do whatever they want.”

She added the thief’s choice of a getaway vehicle in the Walgreens theft was like a stolen ride too.

“You're probably right about that, Lieutenant,” the anchor replies.

The suspects stuffed expensive Dyson vacuums into empty toy boxes and paid for the lower price toys, sheriff's investigators said.Placer Co. Sheriff. Accused serial retail thieves were busted when they returned to a Target store they stole from the previous day, according to Sheriff’s investigators who looked into the incident.
Read full story
18 comments
Rohnert Park, CA1d

"Be aware of subjects going door to door, selling candy bars and asking for donations to benefit kids organizations," police warned.Rohnert Park Dept. of Public Safety. At first, their intentions sounded good, but police said it was all a rouse to steal the personal financial information from residents in one Bay Area community who wanted to help children.
Read full story
17 comments
Berkeley, CA2d

“ Common regard for our fellow community members should be a top priority for a city already in distress," Chief of Police Shawny K. WilliamsVallejo Police. A Bay Area city not too far from Sacramento saw hundreds of unruly drivers who held a violent and raucous illegal sideshow in their community over the weekend.
Read full story
48 comments
Solano County, CA9d

“Here we are. It's fire season, and a wildland arsonist is now going to be released among us. This is not how the system should work."Madera Co. District Attorney. A California District Attorney tore apart the state prison system’s early release policies after she was notified that a serial arsonist would be released back into the community after only serving eight years of his 30-year sentence.
Read full story
13 comments
Hayward, CA10d

When officers searched the suspects' vehicle, they found a stolen motorcycle, drugs, and the metal coat hangar used in the hotels.Petaluma Police. Hotel guests staying in two Sonoma County hotels were awoken by burglars who tried using a wire coat hanger to break into their rooms in the middle of the night.
Read full story
2 comments
San Francisco, CA11d

The attacker went up to the Asian man and asked "Are you Asian?" before slapping the victim twice, police said.via Twitter. A man has been arrested in connection with a shocking caught-on-camera physical attack and hate crime targeting an Asian man at a gas station.
Read full story
33 comments
San Benito County, CA11d

"Malicious and intentional killing of an animal can be charged as a felony crime," police said."Cat" by cstrom is licensed under CC BY-SA 2.0. A troubling animal cruelty case involving three kittens is being reviewed by prosecutors in a community outside the San Francisco Bay Area, police announced this week.
Read full story
12 comments
San Francisco, CA12d

“A charge of bringing contraband into the jail was added to the list of offenses," police stated.Contra Costa Co. Sheriff. A suspected armed shoplifter who led officers on a short foot chase was later busted when he tried smuggling a substance believed to be fentanyl in his anus as he was booked into the county jail, police said.
Read full story
7 comments
San Francisco, CA12d

"This type of behavior is something that CHP Officers have unfortunately had to experience in the past," the agency said.CHP San Francisco via Facebook. After a fiery suspected driving under the influence crash, a young motorist arrested for the offense is accused of urinating in the back seat of a California Highway Patrol cruiser and spitting on a traffic officer.
Read full story
15 comments
Oakland, CA14d

“This brazen crime happened in the middle of the day, in one of our busiest business districts,” said the police chief.via Oakland Police. Police in Oakland shared a shocking video of a car burglar calmly smashing through windows of parked vehicles to steal whatever was inside in broad daylight.
Read full story
17 comments
Daly City, CA15d