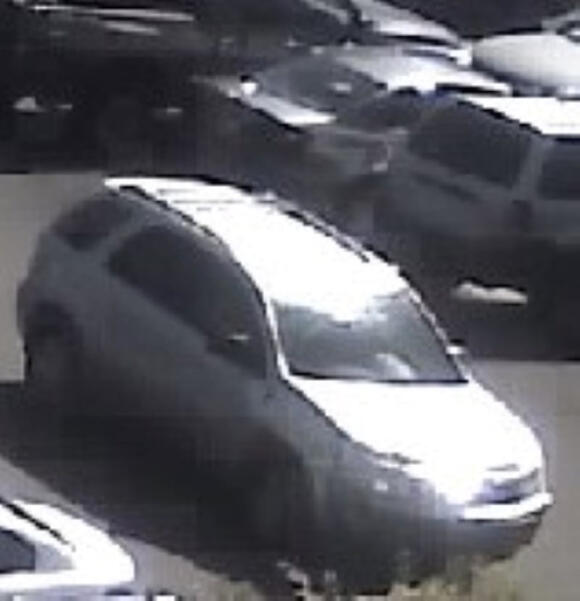 Police believe this vehicle was used as a getaway car after a robbery in a quiet Bay Area city.Alameda Police Dept.

The victim had no idea he was being stalked by three criminals until he was looking down the barrel of a gun, police believe.

He had just left a bank in the quiet island town of Alameda on the morning of Tuesday, June 15, when the trio of armed robbers followed him across the South Shore Center parking lot in search of a quick payday.

“Alameda Police Department dispatchers received the report of an armed robbery with a gun at South Shore Center,” police stated. “Once at the scene, officers were advised that a silver SUV, similar to a Chevy Equinox with three occupants, pulled up to an adult male as he was attempting to enter Safeway. One suspect exited the vehicle, pointed a gun at the victim, and demanded his property. A brief struggle over the items ensued. A second suspect exited the vehicle, pulled out another gun, and demanded the victim’s property. The victim complied, and the three suspects fled northbound on Park Street, likely turning east on Otis Drive towards Fernside Blvd.”

Shaken from the incident, the victim was not seriously harmed. Crime is rare in Alameda, a quiet suburb popular with families who want a laid-back lifestyle while being minutes away from San Francisco and Oakland. South Shore Center is normally teeming with people, particularly in the middle of the day, when the robbery occurred.

“At this time, APD detectives have determined the silver SUV entered the South Shore Center parking lot around 9:50 am and parked within view of the shopping center’s banks,” police continued. “After a brief time in the parking lot, the suspects observed the victim exiting one of the banks. The suspects circled in the parking lot and robbed the victim as he attempted to enter Safeway at 10:05 am. The vehicle was last seen fleeing north on Park Street and is believed to have turned onto Otis Drive.”

Similar robberies have been reported in many other Bay Area communities, like Oakland, San Leandro, Hayward, Union City, Fremont, and San Francisco. Robbers follow their victim after they leave a bank and mug them of their goods soon after.

A disproportionate number of crimes have targeted elderly Asians throughout the East Bay, raising the specter that criminals may be targeting victims based on perceived race or ethnicity.

Police detectives said they need the public’s help to apprehend the suspects in the latest incident.

“Anyone with information or who may have witnessed this heinous crime is encouraged to call our Violent Crimes Unit 510-337-8336,” police stated.

“ Common regard for our fellow community members should be a top priority for a city already in distress," Chief of Police Shawny K. WilliamsVallejo Police. A Bay Area city not too far from Sacramento saw hundreds of unruly drivers who held a violent and raucous illegal sideshow in their community over the weekend.
Read full story
14 comments
Solano County, CA3d

Local residents said the young victim is the latest teenager to be killed in the county in recent weeks.Golden Gate Media. At first, police officers thought they were responding to a fatality involving a teenager who had been struck by a train. But when they arrived on the scene, they found a deceased teenager beside the railroad tracks who was killed not by a passing locomotive, but by an assailant's bullets.
Read full story
10 comments
Santa Cruz, CA3d

The vehicle is seen intentionally "burning out" and applying tire tread marks across the length of the mural, police said.Santa Cruz Police. UPDATE: Two suspects have been arrested in connection with this incident, police announced.
Read full story
10 comments
San Francisco, CA3d

“Here we are. It's fire season, and a wildland arsonist is now going to be released among us. This is not how the system should work."Madera Co. District Attorney. A California District Attorney tore apart the state prison system’s early release policies after she was notified that a serial arsonist would be released back into the community after only serving eight years of his 30-year sentence.
Read full story
13 comments
Hayward, CA4d

"This officer’s quick thinking and bravery undoubtedly helped save this person’s life," his agency said.Hayward Police. A brave California police officer ran towards danger to save the life of a driver who passed out inside a burning car. The entire incident was captured on the officer’s body-worn camera.
Read full story
3 comments
Petaluma, CA4d

When officers searched the suspects' vehicle, they found a stolen motorcycle, drugs, and the metal coat hangar used in the hotels.Petaluma Police. Hotel guests staying in two Sonoma County hotels were awoken by burglars who tried using a wire coat hanger to break into their rooms in the middle of the night.
Read full story
2 comments
San Francisco, CA5d

"Our public highways are not a race track and we will not tolerate improper driving behaviors," the highway patrol said.CHP San Francisco via Facebook. California Highway Patrol officers said they are fed up with reckless driving on the Bay Area’s bridges, and a recent traffic stop involving the driver of a brand new Lamborghini got a taste of enhanced enforcement from the agency.
Read full story
7 comments
Hayward, CA5d

The attacker went up to the Asian man and asked "Are you Asian?" before slapping the victim twice, police said.via Twitter. A man has been arrested in connection with a shocking caught-on-camera physical attack and hate crime targeting an Asian man at a gas station.
Read full story
30 comments
San Benito County, CA5d

"Malicious and intentional killing of an animal can be charged as a felony crime," police said."Cat" by cstrom is licensed under CC BY-SA 2.0. A troubling animal cruelty case involving three kittens is being reviewed by prosecutors in a community outside the San Francisco Bay Area, police announced this week.
Read full story
12 comments
San Francisco, CA6d

“A charge of bringing contraband into the jail was added to the list of offenses," police stated.Contra Costa Co. Sheriff. A suspected armed shoplifter who led officers on a short foot chase was later busted when he tried smuggling a substance believed to be fentanyl in his anus as he was booked into the county jail, police said.
Read full story
7 comments
San Francisco, CA6d

"This type of behavior is something that CHP Officers have unfortunately had to experience in the past," the agency said.CHP San Francisco via Facebook. After a fiery suspected driving under the influence crash, a young motorist arrested for the offense is accused of urinating in the back seat of a California Highway Patrol cruiser and spitting on a traffic officer.
Read full story
15 comments
Oakland, CA8d

“This brazen crime happened in the middle of the day, in one of our busiest business districts,” said the police chief.via Oakland Police. Police in Oakland shared a shocking video of a car burglar calmly smashing through windows of parked vehicles to steal whatever was inside in broad daylight.
Read full story
17 comments
Daly City, CA8d

In one of the break-ins, the suspects smashed the window of an Audi Q7 and stole sunglasses.Daly City Police. Police in a quiet community south of San Francisco released images of two car burglars — one of them carrying a GrubHub food delivery courier bag. The duo is suspected of package thefts and breaking into cars at the Serra Heights condo complex in Daly City, south of San Francisco.
Read full story
7 comments
Salinas, CA8d

One officer shot the man with his patrol rifle, and investigators later determined the gun to be a realistic-looking BB gun.Monterey Co. District Attorney. Investigators have released startling drone video of a fatal officer-involved shooting involving a man who authorities said was drunkenly waving a realistic-looking BB gun at cops.
Read full story
6 comments
Alameda, CA9d

It's the second gunpoint robbery to occur at this popular shopping center in as many weeks. Local residents are alarmed by the increase.Alameda Police Dept. Police are searching for two men who are accused of holding up a Safeway supermarket at gunpoint on a quiet Sunday morning. Investigators released a photograph of the suspects during their getaway after the brazen robbery.
Read full story
43 comments
Mountain View, CA9d

Homeless encampment fires in California are becoming more frequent and more dangerous. One city has had enough.Santa Cruz Police. With more and more fires started by California’s out-of-control homeless encampments, one city is clearing out the makeshift open-air communities to mitigate fire danger as the state endures the most dangerous wildfire season ever.
Read full story
33 comments
Monterey, CA11d

Man arrested after trying to lure children into his truck with candy at city park, police say

The troubling incident happened at a city park named after Dennis the Menace.Monterey Police. A man has been arrested in connection with trying to lure children into his vehicle with a bag of candy in the middle of the day at a city park.
Read full story
21 comments