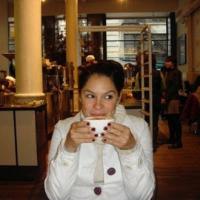 Specializing in the best of Los Angeles! EatDrinkLA shows you how to eat, drink, and live your best Los Angeles every day of the week. My favorite style of articles to share include listicles and "best of" roundups.

LA Cha Cha Chá Restaurant is a spot that will have you dancing to your table. The rooftop restaurant is located in the DTLA Arts District and is originally from Mexico City (hence the LA for Los Angeles). The Executive Chef here is Alejandro Guzman, a chef I became slightly obsessed with after having the most UNBELIEVABLE salad and flan at his pop-up Fabby's L.A. And I generally don't go crazy over salad.

I guess our ordering made an impression on the Chef, too, because he remembered our names from the reservation list and sent out complimentary sparkling wine and a few other dishes.

The menu at LA Cha Cha Cha is uncluttered, which makes it easy to order the perfect selection of dishes. Here are some of my recommendations:

Remember the mind-blowing salad I referenced...well, Chef Guzman has brought it to LA Cha Cha Chá. It's the Ensalada de Jicama with little gems, jicama, herbs, and tamarind vin ($13). Another must-order is the Tostada Terraza with tuna, crispy cilantro, and chile morita aioli ($16).

The Ceviche de Camaron is a nice dish on a scorching day featuring shrimp in a bath of cucumber and beets ($14). You also can't go wrong with the Tostada Monumento with Octopus, cherry tomato, and Habanero sauce ($15). Honestly, I'm pretty much recommending the whole cold snack section since I can't wait to go back and try the Guacamole and Aguachile...

This is where you'll find warm tacos like Pollo, Chorizo, and the very popular Hongos (mushrooms). The price point hovers around $6 for each of them. Other hot dishes include the Fideo Seco pasta with salsa morita and whipped avocado that transported me back to childhood and my own Tata's cooking.

The restaurant offers two unpublished items for children: a rice dish and a Cheese Quesadilla on a blue corn tortilla. You'll probably find the adults will be eating it too.

The large plates at LA Cha Cha Chá include a charcoal-grilled flounder, Pescado Cha Cha Chá; a Pipián Rojo Con Pollo that the chef is highly praised for; a Carnitas pork shoulder confit; and a Steak Pa' Taquear New York Strip ($44). All the dishes can be split between two people since you've already loaded up on all those botanas before. The steak comes with a side of tomatoes, beef butter, and nopal that will have you returning your board almost completely bare at the end.

The menu features a choice between a carrot Flan de Zanahoria and a citrus Merengue ($9). Eager to recreate my Fabby's L.A. experience, I went with the flan. It's the perfect amount of thickness for flan, and the fact that the base is carrots keeps it from being overly sweet.

The beverage menu includes a section devoted to Cocteles, Cerveza, Agua Fresca, and Vinos. Just like the food menu, it doesn't overdo it with too many options. The Red Pepper Mezcal Negroni is nice if you like things hot and smoky ($16), while the Oaxacan Zombie packs a fruity punch that will sneak up on you ($15). Children will delight in enjoying their own version of an "adult drink" from the Agua Fresca section.

Hours are 5:30 to 10:30 p.m. most nights except Sunday when they are open from 4:30 to 9 p.m. If you have kids, you don't mind the early bird special, which is how we snagged a reservation at this hotspot. The bar seating is also a great option if you're blocked out on OpenTable. The restaurant is closed on Mondays.

Specializing in the best of Los Angeles! EatDrinkLA shows you how to eat, drink, and live your best Los Angeles every day of the week. My favorite style of articles to share include listicles and "best of" roundups.

No matter how much time you have in your schedule, there is an afternoon tea in Los Angeles that will work for you! Tea on the run or tea for the long one -- we're stirring the pot right here.
Read full story
Westlake Village, CA3d

Enjoy a taste of summer in Westlake Village

The new menu items at Coin & Candor at the Four Seasons Westlake Village are exactly what this season should taste like: full of flavor while being impossibly light enough to eat a full meal and still slip into a bathing suit afterward. You are steps away from the pool, after all. Here's a look at what's new and offers the taste of summer at Coin & Candor.
Read full story
Los Angeles, CA4d

There's a lot happening in the world of vegetables this week. These vegan events happening in Los Angeles will have you extending Meatless Monday all the way to Sunday night. New Veggie Grill Location (West Hollywood)
Read full story
Los Angeles, CA6d

August in Los Angeles might mean the end of the Summer, but it's not over yet! Join me outside this month for free concerts, food festivals, restaurant openings, and more!. On Thursday, 7/29, what's being called the "official Summer Fair of Los Angeles" is kicking off at Santa Anita Park until August 22nd. Tickets include performances by tribute bands, carnival rides and games, a wine and seltzer garden, and more. Tickets are good from Noon to 10 p.m., but a day must be designated. FREE ADMISSION tickets are still available; otherwise, it's $12 for adults and FREE for kids under 6. Unlimited rides are an additional $40, and there are more than 50 to choose from.
Read full story
Los Angeles, CA8d

Where to taste the summer in Los Angeles

California is known for its above-average seasonal produce. In fact, according to the CFDA, over a third of the country's vegetables and two-thirds of the country's fruits and nuts are grown in California. So where can you go to taste the summer in Los Angeles? Choose your favorite fruit or veggie and read on!
Read full story
Beverly Hills, CA11d

National Tequila Day is Saturday, July 24th, and in honor of the holiday, I'm sharing some of the best cocktails for National Tequila Day and beyond!. Although generally where I think to go for a nice martini, Ocean Prime also has a signature Tequila Cocktail on the menu. Made with Corzo Silver Tequila, fresh orange and lime Juice, and house-infused agave nectar, it's an uplifting experience ($18).
Read full story
Los Angeles, CA13d

Where to go for free hot dogs on National Hot Dog Day!

Wondering where to go on National Hot Dog Day in Los Angeles? Well, I've got your list right here of the top spots to get a deal and a dog on the third Wednesday in July: July 21st, 2021.
Read full story
2 comments
Los Angeles, CA14d

The Bacari franchise has been dropping into neighborhoods since 2008, with its first location in West Adams. Bacari PDR came next in Playa Del Rey in 2014, and Bacari GDL opened in Glendale in 2017. Lastly, Bacari West Third opened in 2018. The restaurants are helmed by partners Danny and Robert Kronfli, along with Chef Lior Hillel. The menu features food with an Israeli-California flair, and all the food is meant to be shared. The brand new brunch at Bacari Silverlake, the latest location, is no different and focuses on Cicchetti small plate dishes instead of larger entrées.
Read full story
Los Angeles, CA16d

Satisfy your sweet tooth with this round-up of where to go on National Ice Cream Day in Los Angeles, which has fallen on the third Sunday in July since 1984. This year it's Sunday, July 18th, 2021.
Read full story
Los Angeles County, CA18d

4 New Food Fests for your Weekend!

Kicking off Friday, July 16th there are 4 food fests that your summer self has been craving!! Stuff your bathing suit away for another weekend, this one is for stuffing your face!
Read full story
Los Angeles, CA19d

Whether you're looking for a place to recommend to out-of-towners or for a quick staycation before jetting off at LAX, the Hyatt Regency Los Angeles International Airport, or Hyatt Regency LAX, should be the first place you think of!
Read full story
Los Angeles, CA20d

Where to go on National French Fry Day in Los Angeles

Hot New Food for your Weekend

Cool down your work week with some hot new food for your weekend in Los Angeles and the O.C. It's sizzling!. Arth Bar & Kitchen (Culver City) Arth Bar & Kitchen is a brand new contemporary Indian restaurant that opened just this week. Executive Chef Sagar Ghosh has prepared a menu that's a blend of the dishes you are used to, like Paneer Makhanwala and Fish Tikka Masala and fresh newcomers like Chicken & Paneer Tika Tacos and a Bombay Burger.
Read full story
24d

Catalina Island is the perfect L.A. escape for the summer because it's so close to home but feels like a world away. Catalina Island is located just 22 miles off the coast of southern California and is split between the area of Avalon (where most of the tourists go) and Two Harbors. The first inhabitants of the island originally called it Pimu and the name Santa Catalina was given November 24th, 1602 by the explorer Sebastian Viscaino for the St. Catherine's Day anniversary.
Read full story
Los Angeles, CA25d

The 8 Best Sandwiches in Los Angeles

I'm going to take a "gamble" that one of these best sandwiches in Los Angeles is just your style! Since its inception in the 18th century, so the 4th Earl of Sandwich didn't have to leave the gambling table, sandwiches have become more than just a convenience food; they now dominate the whole lunch category! Here are 8 that you should really be biting into right now.
Read full story
3 comments
Glendale, CA27d

5 Free Things to do with Kids in Glendale

It's Summer, and your kids are home ALL THE TIME! Since every day can't be a trip to Chuck E. Cheese or a pricey museum, here are 5 FREE things to do in Glendale with kids under 5.
Read full story
Los Angeles, CA27d

Where to go for National Fried Chicken Day in Los Angeles

Nothing shakes off the memory of a 4th of July bikini like a bucket of fried chicken! National Fried Chicken Day is Tuesday, July 6th! Make it a sweatpants kind of week and indulge in some of the best Los Angeles has to offer.
Read full story
4 comments
Los Angeles, CA29d

Where to get Food that's Red, White, and Blue

The 4th of July is all about the star-spangled style of eating. Here are some spots that are doing up the red, white, and blue in food and drinks today. 4th of July FoodPhoto Credit: Jill Wellington/Pixabay.
Read full story
Los Angeles, CA30d

Where to Find the Best Soft Pretzels in Los Angeles

Nothing says summer like a soft pretzel. It instantly makes you think of fun at the beach or the ballpark. And did you know they are the oldest snack foods in the world? Here's where to find the best soft pretzels in Los Angeles when that Auntie Anne's kiosk at that mall just won't don't the trick.
Read full story
2 comments